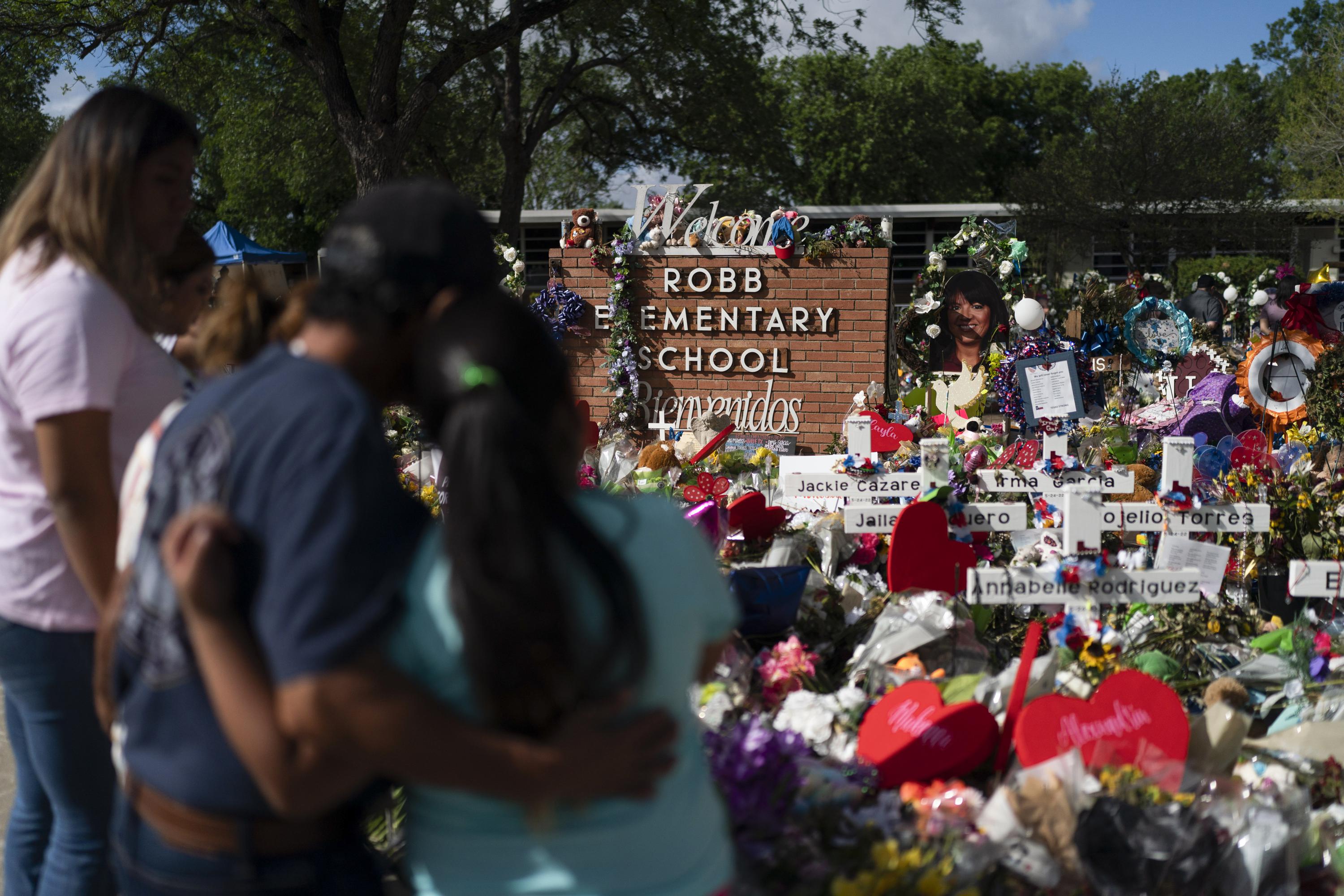 UVALDE, Texas (AP) — Multiple police armed with rifles and at least one ballistic shield stood and waited in a school hallway for nearly an hour while a gunman carried out a massacre of 19 elementary students and two teachers, according to a Monday news report that marks the latest embarrassing revelation about the failure of law enforcement to thwart the attack.

The officers with heavier firepower and tactical equipment were there within 19 minutes of the gunman arriving on campus — earlier than previously known, according to documents reviewed by the Austin American-Statesman and and KVUE-TV.

The outlets’ report, which did not indicate the source of the documents, however intensifies the anguish and questions over why the police didn’t act sooner to stop the May 24 slaughter in the Robb Elementary School classroom. T

The information is to be presented to a public Texas Senate hearing in Austin on Tuesday. Investigators say the latest information indicates officers had more than enough firepower and protection to take down the gunman long before they finally did, the outlets reported.

The timeline the American-Statesman and KVUE reported from the documents included footage from inside the school that showed the 18-year-old gunman casually entering a rear door at 11:33 am, walking to a classroom and immediately spraying gunfire before barricading himself. Video showed 11 officers entering the school three minutes later, the outlets reported.

School district police Chief Pete Arredondo called the Uvalde Police Department landline and reported that their suspect had “shot a lot” with an AR-15-style rifle and outgunned the officers at the school, who he said were armed only with pistols, the outlets reported.

Four minutes later, at 11:44 am, body camera video recorded the sound of more gunshots. At 11:52 am, the first ballistic shield arrived as officers grew impatient to act. Arredondo struggled to find a key to the classroom door even though no one is believed to have tried opening the door, the outlets reported.

Another officer with a ballistic shield arrived at 12:03 pm, and another came with a shield two minutes later. About 30 minutes before the officers finally breached the classroom door at 12:50 pm, Arredondo is heard wondering aloud if the gunman could be shot through a window. Only at 12:46 pm did Arredondo tell the tactical team members to breach the door when ready, the outlets reported.

In the past week, the San Antonio Express-News reported that video surveillance footage from the school did not show officers attempting to open the door leading classrooms where the massacre was happening. And The New York Times reported two Uvalde city police officers told a sheriff’s deputy that they passed up a fleeting chance to shoot the gunman while he was still outside the school because they feared they would hit children.

Delays in the law enforcement response have been the focus of the federal, state and local investigation of the massacre and its aftermath. Questioned about the law enforcement response began days after the massacre. Col. Steve McCraw, director of the Texas Department of Public Safety, said on May 27 that Arredondo made “the wrong decision” when he chose not to storm the classroom for more than 70 minutes, even as trapped fourth graders inside two classrooms were desperately calling 911 for help.

Rounding off later he didn’t consider himself the person in charge and assumed someone else had taken control of the law enforcement response. Arredondo has declined repeated requests for comment to The Associated Press.

State police initially said the gunman entered through an exterior door that had been proposed open by a teacher. A spokesman for the Texas Department of Public Safety said on May 31though, Tuesday that the teacher closed the door after realizing a shooter was on campus, but it did not lock as it should have.

On June 2, state Sen. Roland Gutierrez said it was a “system failure” that school district police Chief Pete Arredondo received no word of the pleas for help from people inside Robb Elementary School on May 24 because he had no two-way radio link with city police.

“I want to know specifically who was receiving the 911 calls,” Gutierrez said during a news conference.

The Uvalde school board heard from members of the public Monday, including relatives of those killed in the attack. They took turns criticizing the police response and what they described as lax security measures at the school in general.

Lyliana Garcia, 16, is the daughter of teacher Irma Garcia, who was killed in the shooting, and José Garcia, who died of a heart attack two days later. They had four children — a Marine, a college student, a seventh grader and Lyliana.

“The knowledge of being orphaned at such a young age is inconceivable,” she told the school board. “These are the consequences my family has to suffer due to the lack of due diligence. I would like to share a quote of one of my sister’s agonizing children. She said, ‘My mom died protecting her students, but who was protecting my mom?’”

A legislative committee looking at law enforcement response completed another day of closed-door hearings in Uvalde on Monday.

State Rep. Dustin Burrows, who is chairing the committee investigating the shooting at Robb Elementary School in Uvalde, had said at the start of the day’s session that the panel would hear more witness testimony from the Uvalde Police Department, as well as from another officer from the school district police and a member of the Texas Department of Public Safety.

Burrows said that testimony would continue on Tuesday in Austin. He said he hoped to provide information on when at least a preliminary report would be released to the public.