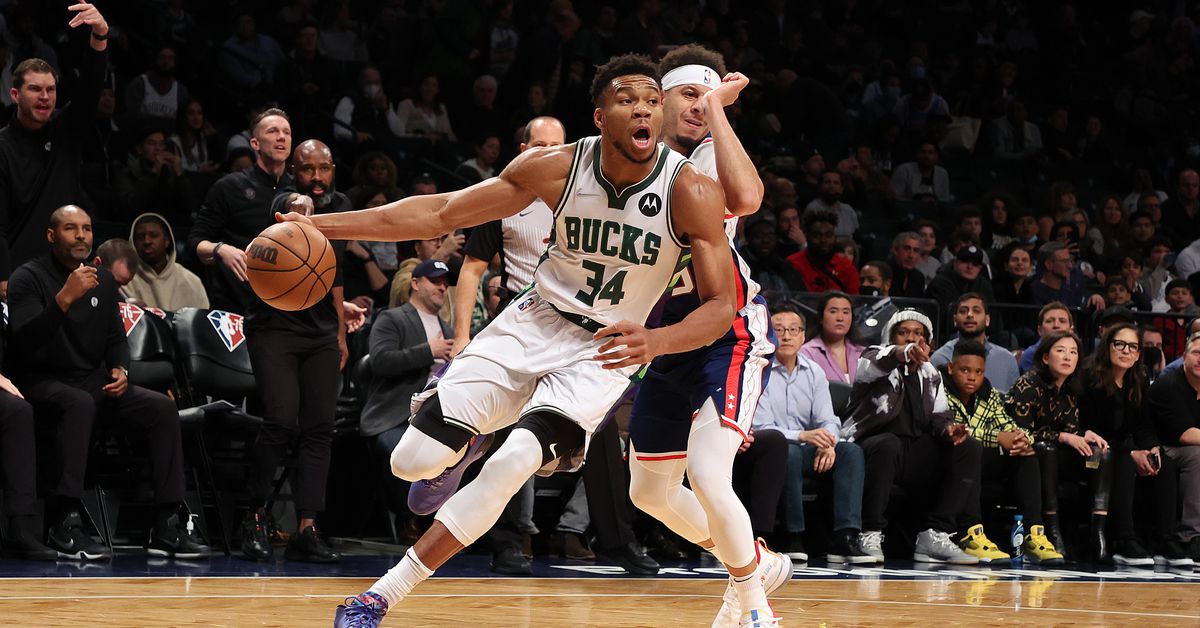 In a hotly-contested matchup of Eastern Conference title hopefuls, the Milwaukee Bucks needed overtime to edge by the Brooklyn Nets by a 120-119 final. Along the way, Giannis Antetokounmpo surpassed Kareem Abdul-Jabbar to become the Bucks’ all-time leading scorer with 44 points. Kevin Durant led Brooklyn with 26.

It was a sloppy beginning for both squads, with turnovers galore as the Nets led 30-23 after one. No single Net (not even Durant, who the Bucks ferociously double-teamed) had a big offensive half, but they still led 60-54 going into the locker room. Giannis abused the Brooklyn interior defense for 20 points on dunk after dunk, putting him 19 shy of the franchise scoring record.

Giannis came out like a house on fire after half, scoring 13 third-quarter points, the last two of which gave the Bucks their first lead since the 2-minute mark of the opening period. Milwaukee led 87-86 after three. In the fourth, Giannis staked the Bucks to a 4 point lead before exiting for about two minutes. During that time, the Nets began an 11-0 run. After Khris Middleton committed a flagrant-2 on a Bruce Brown fastbreak and got tossed, the Nets opened up a 9 point advantage with under 4 minutes left. From there, however, the Bucks embarked on an 11-2 run to tie the tame. Giannis first tied Kareem’s record with two free throws, then broke it with 18 seconds left on a game-tying three. KD’s game-winner at the buzzer bounced off the rim, and we headed to overtime.

Milwaukee managed to grab a quick 4 point lead in the extra period, but the Nets hung tough. Down 2 with 20 seconds left, Durant’s corner three bounced off the rim with 8.7 to go, but Wesley Matthews fouled him. That call was upheld on a Milwaukee challenge, and KD hit all three free throws to grab a one-point lead. Giannis then immediately drove downcourt and drew a foul with 3 seconds left. He split the free throws, but Durant’s three from the top of the arc missed at the buzzer (familiar sound) and the Bucks escaped with a 120-119 victory.

Stat That Stood Out

I was all ready to point to Milwaukee’s 23 turnovers had they lost this game, but let’s be honest here: there can be no other stat that matters more than the 44 Giannis scored. Now the Bucks’ all-time leading scorer, he’s increasingly hard to ignore a potential MVP.