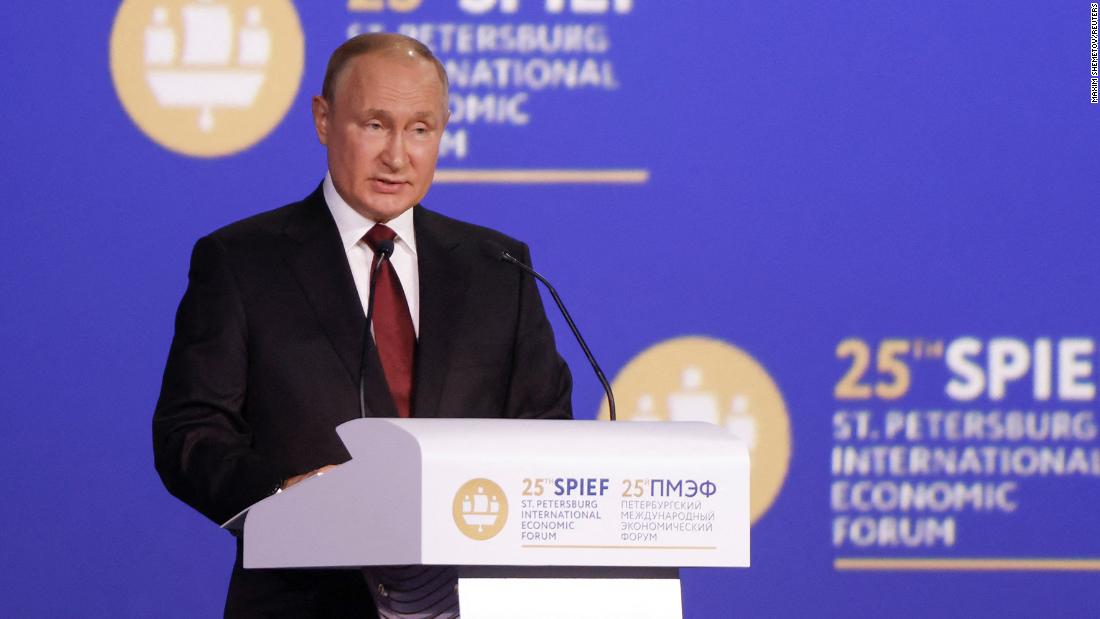 “When they won the Cold War, the US declared themselves God’s own representatives on earth, people who have no responsibilities — only interests. They have declared those sacred interests. Now it’s one-way traffic, which makes the world unstable,” Putin told the audience.

The much-hyped speech was delayed for more than 90 minutes because of a “massive” cyberattack. Kremlin spokesperson Dmitry Peskov told journalists in an impromptu conference call that the speech was postponed due to distributed denial of service (DDoS) attacks on the conference’s systems.

It was not immediately clear who was behind the attack. Ukrainian IT Army, a hacker collective, named the St. Petersburg Forum as a target earlier this week on its Telegram channel.

Putin’s address at the annual conference, one of his more substantial speeches since he ordered the invasion of Ukraine almost four months ago, was seen as an opportunity for the world to get some insight into his thinking.

Once the Russian president took the stage in the western Russian city, he wasted no time on pleasantries and went straight into attacks on the United States and its allies.

“They live in the past on their own under their own delusions … They think that … they have won and then everything else is a colony, a back yard. And the people living there are second-class citizens,” he said, adding that Russia’s “special operation” — the phrase the Russian government uses to describe its war on Ukraine — has become a “lifesaver for the West to blame all the problems on Russia.”

After accusing western countries of blaming their problems on Russia, Putin tried to pin the blame for rising food prices on the “US administration and the Euro bureaucracy.”

Ukraine is a major food producer, but the Russian invasion has affected its entire production and supply chain. The United Nations has said the war has had a devastating impact on supplies and prices and warned it could push up to 49 million more people into famine or famine-like conditions.

Ukrainian officials have accused Russia of stealing Ukrainian grain, accusations that appear to have been confirmed by images showing Russian ships being loaded with Ukrainian grain. On top of that, Russia is blocking maritime access to the Black Sea ports held by Ukraine, meaning that even the grain that is still under Ukrainian control cannot be exported to the many countries that rely on it.

The long-time Russian leader also blamed the West for trying to hurt the Russian economy, calling the sanctions on Moscow “crazy” and “reckless.”

“Their intention is clear to crush the Russian economy by breaking down the chain the logistical chains, freezing national assets and attacking the living standards, but they were not successful,” he added. “It has not worked out. Russian business people have rallied together working diligently, conscientiously, and step-by-step, we are normalizing the economic situation.”

The Russian president has long framed his decision to launch an invasion of Ukraine as a response to Kyiv’s growing diplomatic and security ties with the West. Last week, he hinted that his aim at Ukraine is the restoration of Russia as an imperial power.

Putin claims Russia ‘forced’ into the conflict in Ukraine

Speaking about his war on Ukraine on Friday, Putin went straight to his propaganda playbook, claiming Russia was “forced” into the conflict.

He called the invasion “the decision of a sovereign country that has an unconditional right … to defend its security.”

“The decision aimed at protecting our citizens, residents of the People’s Republics of Donbas, who for eight years were subjected to genocide by the Kyiv regime and neo-Nazis who received the full protection of the West,” he said.

The Kremlin has been accused of discriminating against ethnic Russians and Russian speakers in the regions, a charge Kyiv has denied. Starting 2019, Russian passports were offered to the residents of the two entities.

Finally, in late February, Putin announced he would recognize them as independent, a move that was seen as the opening save of the war.

He said on Friday that Russian soldiers and the separatists were “fighting to defend their people” in the Donbas and the right to “reject any attempt to impose pseudo values ​​of dehumanization and moral degradation from outside.”

No country other than Russia recognizes the two as independent. Ukraine and the rest of the international community considers the territories to be under Russian occupation.

The European Commission announced Friday that it was recommending Ukraine and neighboring Moldova as EU candidate states, with the commission’s chief Ursula von der Leyen saying that Ukrainians are “ready to die” for the European perspective.

Speaking about the European Union on Friday, Putin said the bloc had “lost its sovereignty.”

“The European Union has completely lost its sovereignty, and its elites are dancing to someone else’s tune, harming their own population. Europeans’ and European businesses’ real interests are totally ignored and swept aside,” he said.