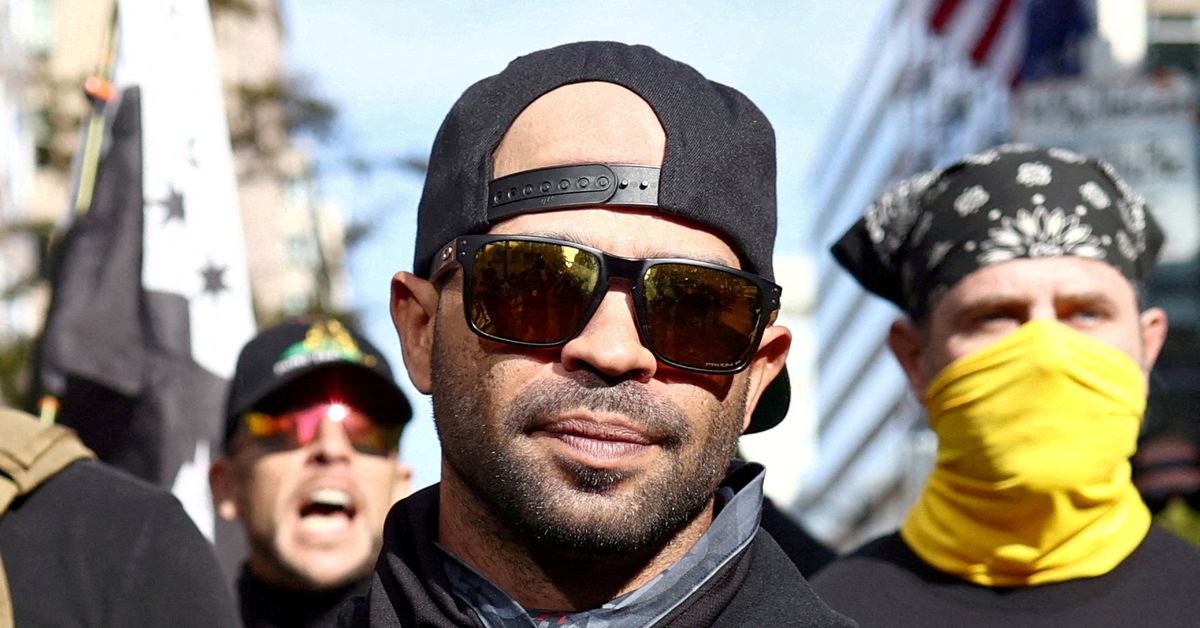 WASHINGTON, June 6 (Reuters) – The former leader of the right-wing group the Proud Boys, Enrique Tarrio, and four associates were charged with seditious conspiracy on Monday for their role in the Jan. 6, 2021, attack on the US Capitol by Donald Trump’s supporters.

Federal prosecutors accused the five men of plotting the attack in advance and encouraging other Trump supporters to prevent Congress from certifying his 2020 election defeat by Democrat Joe Biden.

Thousands of Trump’s supporters stormed the Capitol that day after a fiery speech in which he repeated his false claims that his loss was a result of widespread fraud, an allegation repeatedly rejected by multiple courts, state election officials and members of Trump’s own administration.

Eleven members of another right-wing group, the Oath Keepers, were charged in January with seditious conspiracy for allegedly playing a similar leadership role in the deadly attack.

Federal prosecutors rarely use the seditious conspiracy charge, defined as attempts “to overthrow, put down or to destroy by force the government of the United States.” It carries a sentence of up to 20 years in prison.

Federal prosecutors investigating the attack filed the new charges against Tarrio, Dominic Pezzola, Ethan Nordean, Joe Biggs and Zachary Rehl, according to court papers. All five have pleaded not guilty to other criminal charges related to the attack.

The new indictment accuses them of encouraging other Proud Boys to come to Washington on Jan. 6, 2021; raising money to buy bulletproof vests and other tactical gear; and directing crowd members into the Capitol and assaulting police once the attack was underway.

It said Tarrio received a document titled “1776 returns” that laid out plans to occupy buildings in the Capitol complex three days before the attack.

Members of the far-right Proud Boys, including leader Enrique Tarrio (C), rally in support of US President Donald Trump to protest against the results of the 2020 US presidential election, in Washington, US November 14, 2020. REUTERS/Hannah McKay /File Photo

Members of the group sought to erase those messages when Tarrio was arrested on Jan. 4 for burning a church’s “Black Lives Matter” banner the prior month, prosecutors said.

Tarrio was ordered to stay out of Washington as a condition of his release, but prosecutors say he still played a leading role in the attack.

The indictment says he returned to the city on Jan. 5 and met with Oath Keepers leader Stewart Rhodes in an underground parking garage.

Rhodes and other Oath Keepers have pleaded not guilty to the seditious conspiracy charges and are due to stand trial later this year. Three other members of the group have pleaded guilty.

About 800 people have been charged with taking part in the Capitol riot, with about 250 guilty pleas so far.

The new charges come days before the US House of Representatives plans to hold its first prime-time hearing that will attempt to reverse Republican efforts to downplay or deny the violence of the day. There are five months until Nov. 8 midterm elections that will determine which party controls Congress for the next two years. L1N2XT157

After a two-month trial, a jury acquitted all defendants.