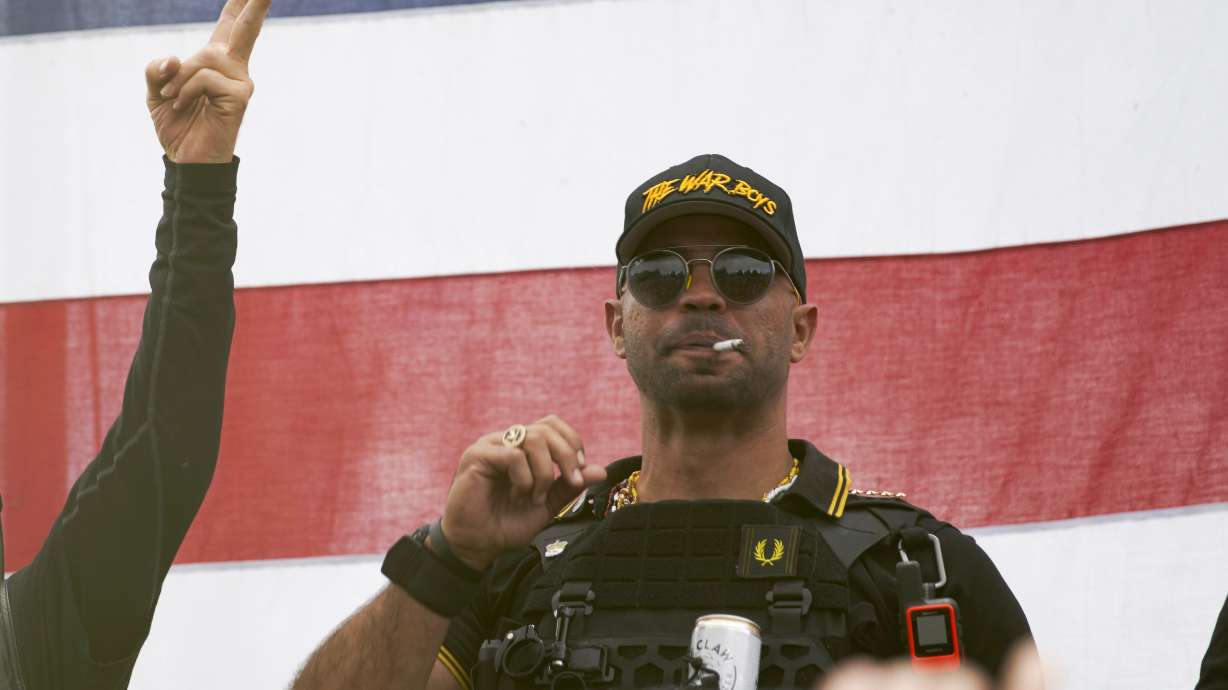 Proud Boys leader Enrique Tarrio wears a hat that says The War Boys and smokes a cigarette at a rally in Delta Park on Sept. 26, 2020, in Portland, Ore. Tarrio, the former top leader of the far-right Proud Boys extremist group, and other members were indicted Monday, on seditious conspiracy charges for what federal prosecutors say was a coordinated attack on the US Capitol to stop Congress from certifying President Joe Biden’s 2020 electoral victory. (Allison Dinner, Associated Press)

WASHINGTON — The former top leader of the far-right Proud Boys extremist group and other members were charged Monday with seditious conspiracy for what federal prosecutors say was a coordinated attack on the US Capitol to stop Congress from certifying President Joe Biden’s 2020 electoral victory.

The latest indictment against Henry “Enrique” Tarrio, the former Proud Boys chairman, and four others linked to the group as the US House committee investigating the Jan. 6 riot prepare to begin public hearings this week to lay out its findings.

The indictment alleges that the Proud Boys conspired to forcibly oppose the lawful transfer of presidential power. Tarrio and the others — Ethan Nordean, Joseph Biggs, Zachary Rehl and Dominic Pezzola — were previously charged with different conspiracy counts.

They are scheduled to stand trial in August in Washington, DC’s federal court.

The seditious conspiracy charges are among the most serious filed so far, but aren’t the first of their kind. Eleven members or associates of the anti-government Oath Keepers militia group, including its founder and leader Stewart Rhodes, were indicted in January on seditious conspiracy charges in a serious escalation in the largest investigation in the Justice Department’s history.

Three Oath Keepers have already pleaded guilty to the rarely used Civil War-era charge that calls for up to 20 years in prison. The indictment alleges that the Oath Keepers and their associates prepared in the weeks leading up to Jan. 6 as if they were going to war, discussing things like weapons and training.

Tarrio, the group’s top leader, wasn’t in Washington, DC, when the riot erupted on Jan. 6, 2021, but authorities say he helped put into motion the violence that day.

Police arrested Tarrio in Washington two days before the riot and charged him with vandalizing a Black Lives Matter banner at a historic Black church during a protest in December 2020. Tarrio was released from jail on Jan. 14 after serving his five-month sentence for that case.

An attorney for Tarrio said his client “is going to have his day in court.”

“And we intend to vigorously represent him through that process,” said Nayib Hassan.

Defense attorney Carmen Hernendez, who represents Rehl, said her client is “as innocent of these charges as the ones that had already been pending against him.”

“Seditious conspiracy requires the use of force, and he never used any force nor thought about using any force,” Hernandez said.

More than three dozen people charged in the Capitol siege have been identified by federal authorities as leaders, members or associates of the Proud Boys, whose members describe it as a politically incorrect men’s club for “Western chauvinists.”

They have brawled with anti-fascist activists at rallies and protests. Vice Media co-founder Gavin McInnes, who founded the Proud Boys in 2016, sued the Southern Poverty Law Center for labeling it as a hate group.

The indictment alleges that the Proud Boys held meetings and communicated over encrypted messages to plan for the attack in the days leading up to Jan. 6. On the day of the riot, authorities say Proud Boys dismantled metal barricades set up to protect the Capitol and mobilized, directed and led members of the crowd into the building.

Prosecutors have said the Proud Boys arranged for members to communicate using specific frequencies on Baofeng radios. The Chinese-made devices can be programmed for use on hundreds of frequencies, making it difficult for outsiders to eavesdrop.

Shortly before the riot, authorities say Tarrio posted on social media that the group planned to turn out in “record numbers” on Jan. 6, but would be “incognito” instead of donning their traditional clothing colors of black and yellow.

Around the same time, an unnamed person sent Tarrio a document that laid out plans for occupying a few “crucial buildings” in Washington on Jan. 6, including the House and Senate office buildings around the Capitol, the indictment says. The nine-page document was entitled “1776 Returns” and called for having as “many people as possible” to “show our politicians We the People are in charge,” according to the indictment.

A New York man pleaded guilty in December to storming the US Capitol with fellow Proud Boys members. Matthew Greene was the first Proud Boys member to publicly plead guilty to conspiring with other members to stop Congress from certifying the Electoral College vote. Greene agreed to cooperate with authorities investigating the attack.

Another Proud Boy, Charles Donohoe, of Kernersville, North Carolina, pleaded guilty in April to conspiracy and assault charges and also agreed to cooperate in the Justice Department’s cases against other members of the extremist group.

In December, a federal judge refused to dismiss an earlier indictment charging alleged leaders of the Proud Boys with conspiring to block the certification of Biden’s electoral college win. US District Judge Timothy Kelly rejected defense attorneys’ arguments that the men were charged with conduct that is protected by the First Amendment right to free speech.