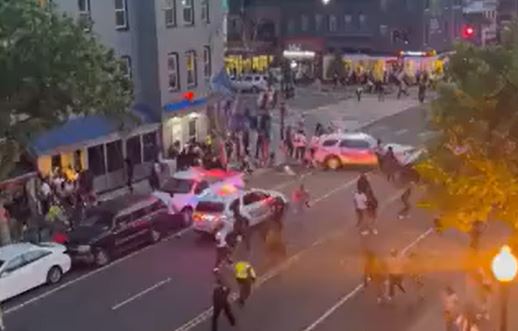 (NewsNation) — A shooting in the nation’s capital Sunday evening left a teenager dead and three others, including a police officer, injured.

The DC Police Department reports that four people were shot in the area of ​​14th and U Street Northwest. One victim, the 15-year-old was killed. The others, including the officer, are in stable condition at area hospitals.

Nearly 100 officers responded to the fatal scene they say started with an unpermitted event associated with a Moechella event. After multiple incidents during the gathering, police determined it was unsafe and began to shut it down when the gunfire broke out.

“When you have large gatherings in a dense area, all it takes is one person introducing a gun to the situation that makes it deadly. In this case unfortunately, a 15-year-old lost his life in this case. My condolences to that 15-year-old’s family as well as the other people who are injured,” Metropolitan Police Chief Robert Contee said at a news conference.

Chief Contee said officers recovered several guns in the area, including one from one of the shooting victims. The gun used to shoot the four victims has not been recovered yet, and police believe there was not an exchange of gunfire.

“There’s a theme that we see here: illegal firearms in the hands of people who should not have them make events like this unsafe for people who just want to enjoy the beautiful weather, who want to enjoy Father’s Day, and want to enjoy our city . This is unacceptable. I think as we continue to go through this investigation and we peel back the layers to really see what happened, we need to as a city make sure individuals are held accountable for their actions,” Chief Contee continued.

Investigators do not know if the victims were targeted or what sparked the shooting, but they do know that they want to hold those responsible for the shooting accountable.

At this time, authorities are still determining if legal actions will be taken against Moechella organizers.

In the preliminary stages of the investigation, DC Police shared on social media they were looking for a man 5’4” in height with curly hair and wearing all black clothing in connection to the shooting. Anyone who sees someone matching the description is urged not to approach them or take action, but to instead call 911 immediately.