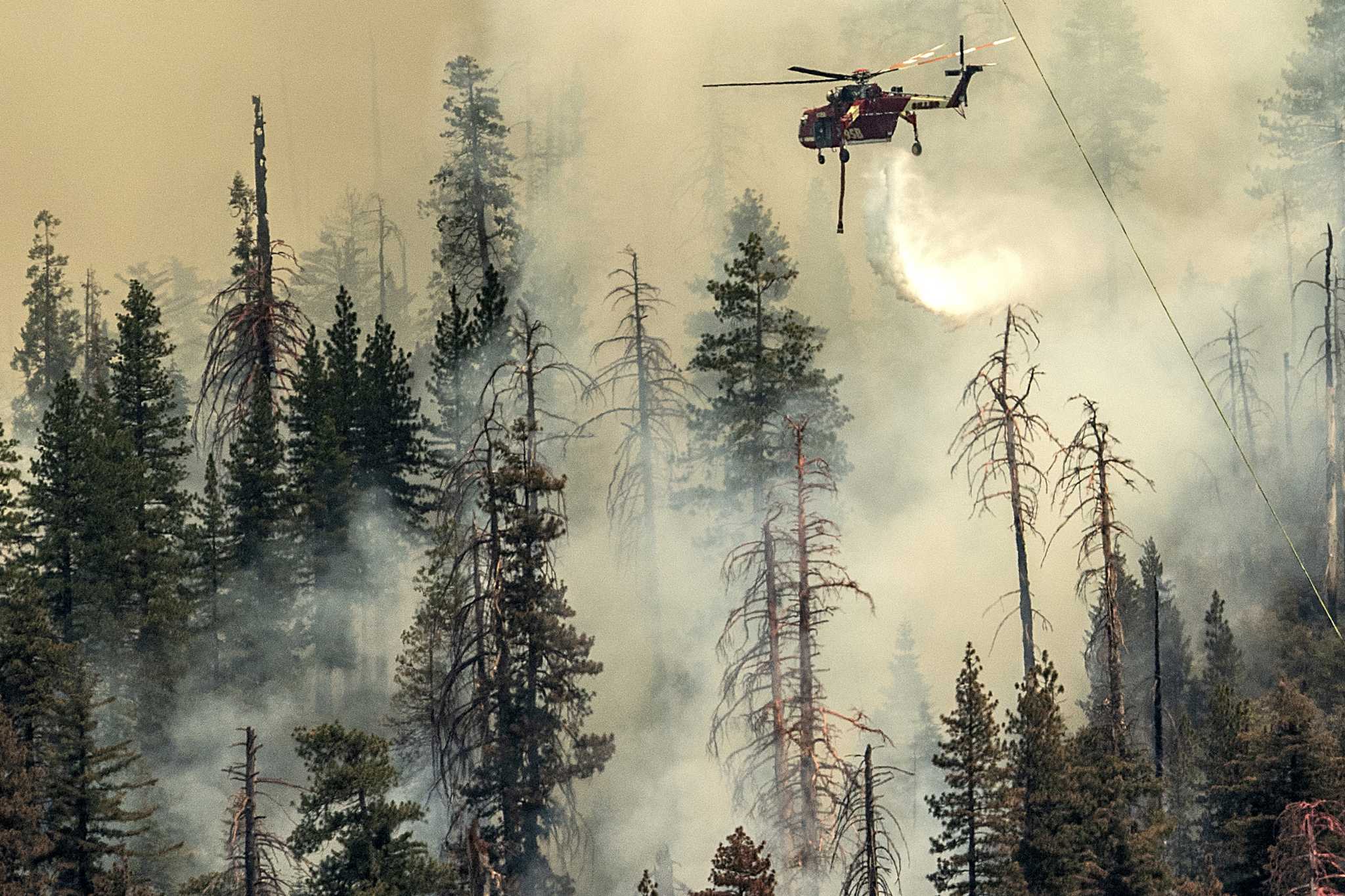 Wildfire activity inside the Washburn Fire burning in Yosemite National Park is reportedly so intense it’s lifting tree debris hundreds of feet into the air, causing at least one near-miss for firefighting aircraft.

Radio traffic from plane over the blaze Saturday documented the rare phenonemon: “Hey, just want to let you know, a branch went over the top of us,” a pilot radioed into dispatch. “A pretty good size, probably 50 feet above us coming down and fell right between tanker 103 and myself.”

“OK, copy. So like a repeat of yesterday,” the dispatcher replied.

“That’s exactly what I’m getting that,” the pilot said. “So if we keep seeing that, we might have to knock it off. I don’t want to take a chance of busting a window on an airplane or hurting an aircraft for this.”

#WashburnFire interesting little chat. Near miss with a tree branch and Air Attack and Tanker 103. As civilians, we just see planes dropping loads. But listen to this choreography that goes on behind the scenes of fire. pic.twitter.com/Dn2CcTZ7qV

Wildfires are capable of creating their own weather, sometimes referred to as a firestorm. As the fire burns hot and intense at the ground level, heat rises rapidly and creates a vacuum. Air rushes in to fill that vacuum, and the resulting updraft is powerful enough to carry debris, form a firenado and make its own lightning.

“This was just confirmed to me directly by an airborne eyewitness!” UCLA climate scientist Daniel Swain tweeted. “Large debris from sequoia trees (including at least one branch >2 ft long) have been lofted hundreds or more feet vertically by #WashburnFire in Yosemite.”

As of Sunday morning, the Washburn Fire is at 1,591 acres with no containment. Evacuation orders remain in effect for Wawona, the Mariposa Grove and Wawona Campground, but most of Yosemite National Park is still open. Officials are warned visitors to expect delays of to two hours at entrances in other parts of the park, as the southern entrance closed and road closures are in place. Visitors are likely to see “smoky conditions and poor air quality” as the fire spreads.

The wildfire started on Thursday afternoon near the Washburn Trail in the southern end of the park. You can see the latest incident reports from Yosemite National Park here. A map being updated by the National Park Service shows where the Washburn Fire is burning within the borders of Yosemite:

“The fire is burning in difficult terrain with continuous heavy fuels in and around the fire,” Yosemire Fire wrote in its latest incident report. “Significant tree mortality from 2013-2015 has left significant dead standing and dead fallen fuels. This also presents significant safety hazards to firefighters. Fire scars from past fires located approximately one to three miles from the current fire perimeter will assist firefighters in slowing the growth of the fire. Firefighters will continue going direct when safe and will scout and prepare indirect lines.”

Temperatures are high in the region this weekend, with a warming trend in the forecast; a high of 86 is expected today and 91 on Monday.

According to the park service, the fire started around 2 pm Thursday near the Washburn Trail. One of the most popular visitor attractions in Yosemite National Park, Mariposa Grove has more than 500 mature giant sequoias. Giant sequoias are the largest trees in the world, and the grove holds trees that may be thousands of years old. One of the best-known trees, the towering Grizzly Giant, is estimated to be 2,700 years old. Mariposa Grove was previously closed for three years, from 2015 to 2018, for a $40 million restoration project.

In 1864, President Abraham Lincoln signed the Yosemite Valley Grant Act into law, protecting the land, including Mariposa Grove, for the public and future generations. The bill would inspire what would become the National Park System.

The Red Cross announced at 5 pm on Saturday that it has closed the evacuation site at 5089 Cole Road in Mariposa, after “caring for 10 displaced residents and tourists.” The shelter is currently in standby status. About 700 people have evacuated from areas affected by the fire, the Fresno Bee reported. An evacuation map can be found here.

The cause of the fire is under investigation. You can check AlertWildfire’s live cameras to monitor the progress of the fire.

This is a carousel. Use Next and Previous buttons to navigate

This is a developing story and information will be added as it becomes available.