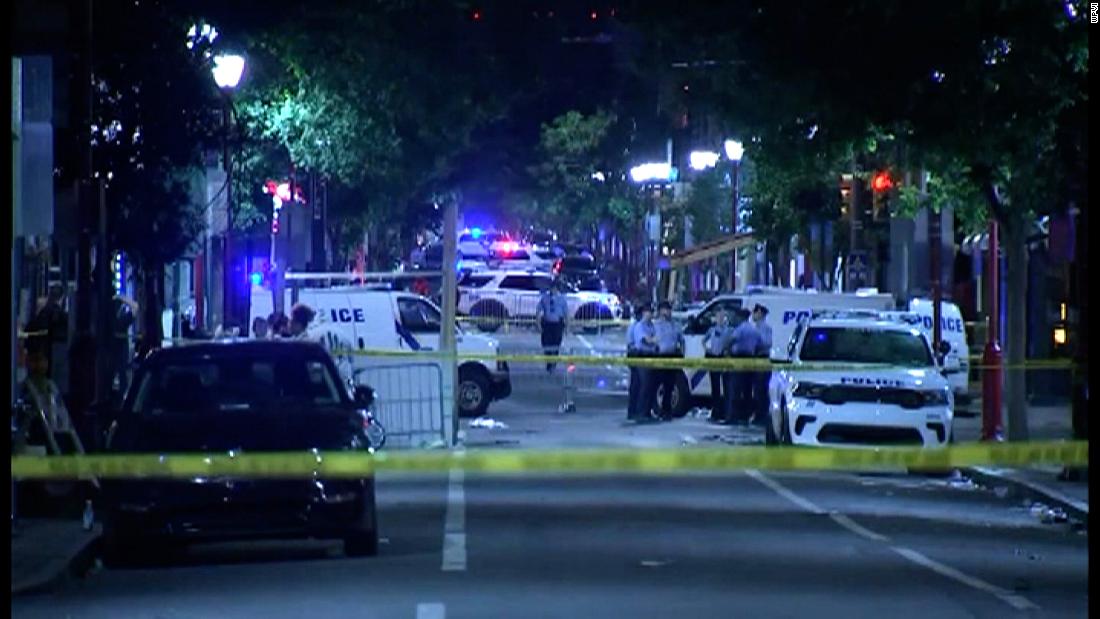 The officers stationed on South Street “observed several civilians suffering from gunshot wounds, lying on the sidewalk and in the street.” The officers then began rendering first aid to those who were injured, she added.

Outlaw said five guns were used by the shooters after a possible “physical altercation.” One gunman was likely to be shot and wounded but escaped police, she said; another suspected gunman, who may have been involved in the physical altercation, is likely among the three people killed.

The other two victims are believed to be innocent bystanders, Outlaw said.

Two handguns were recovered at the scene, including one with an extended magazine, according to Pace. No arrests have been made in connection with the shooting.

“At this point we don’t know whether or not the altercation that took place was between a group of individuals, or if this was tied to another group or affiliation,” Outlaw said.

One officer who saw a man firing a handgun into a large crowd drew his weapon and “fired several times in the direction of the unknown male, we believe striking him,” Outlaw said. “The unknown male dropped his handgun on the sidewalk, and ran southbound on 600 American Street. The male was then lost in the area.”

The three people killed were ages 22, 27 and 34. The 11 injured in the shooting are between 17 to 69 years old, and their conditions range from stable to critical, according to the commissioner.

Outlaw said the investigation is in its early stages and the incident was one of several shootings in the area Saturday evening. It’s not clear yet whether the shootings are connected, she said.

“Yesterday was a dark day for Philadelphia,” Outlaw said. “And while many of us were out enjoying the beautiful day in the city, a horrendous and unthinkable act happened in a very popular local and tourist hangout.”

Police are working with state and federal authorities on the investigation and the FBI is assisting with resources, the commissioner said. Police are offering a $20,000 reward for information that leads to an arrest and have urged any witnesses to come forward.

“Hundreds and hundreds of people were out there last night,” Outlaw said.

The identities of the two men and one woman killed have not been released.

The violence in Philadelphia marked the sixth mass shooting in the US just this weekend, according to the non-profit organization Gun Violence Archive.

“The surge in gun violence that we’ve seen across the nation — and here in Philadelphia — makes me not just heartbroken, but angry,” Philadelphia Mayor Jim Kenney said Sunday.

“Once again, we see lives senselessly lost and those injured in yet another horrendous, brazen and despicable act of gun violence.”

Hundreds of people were in the area

South Street is “known for being a corridor of entertainment” with multiple bars and restaurants, Pace said.

“There were hundreds of individuals just enjoying South Street, as they do every single weekend, when this shooting broke out.”

The motives for the shootings remain unclear.

There have been at least 239 mass shootings so far this year, according to the Gun Violence Archive. CNN and the archive defines mass shooting as one in which at least four people are shot, excluding the shooter.

The mayor said he’s fed up with senseless gun violence and called for stronger laws to help prevent violent people from getting guns.

“We cannot accept continued violence as a way of life in our country. Until we address the availability and ease of access to firearms, we will always be fighting an uphill battle,” said Kenney.

“I will continue to fight to protect our communities and urge others to advocate for stronger laws that keep guns out of the hands of violent individuals.”

The Philadelphia shooting follows back-to-back high-profile shootings, including those at a supermarket in Buffalo, New York; an elementary school in Uvalde, Texas; and a hospital in Tulsa, Oklahoma.

Early Sunday in Chattanooga, Tennessee, three people were killed and at least 14 others were injured in a shooting at a nightclub just before 2:45 am, according to local police.

Correction: A previous photo incorrectly identified bullet holes in a Philadelphia South Street storefront window as from the incident on June 4. The photo has been replaced.