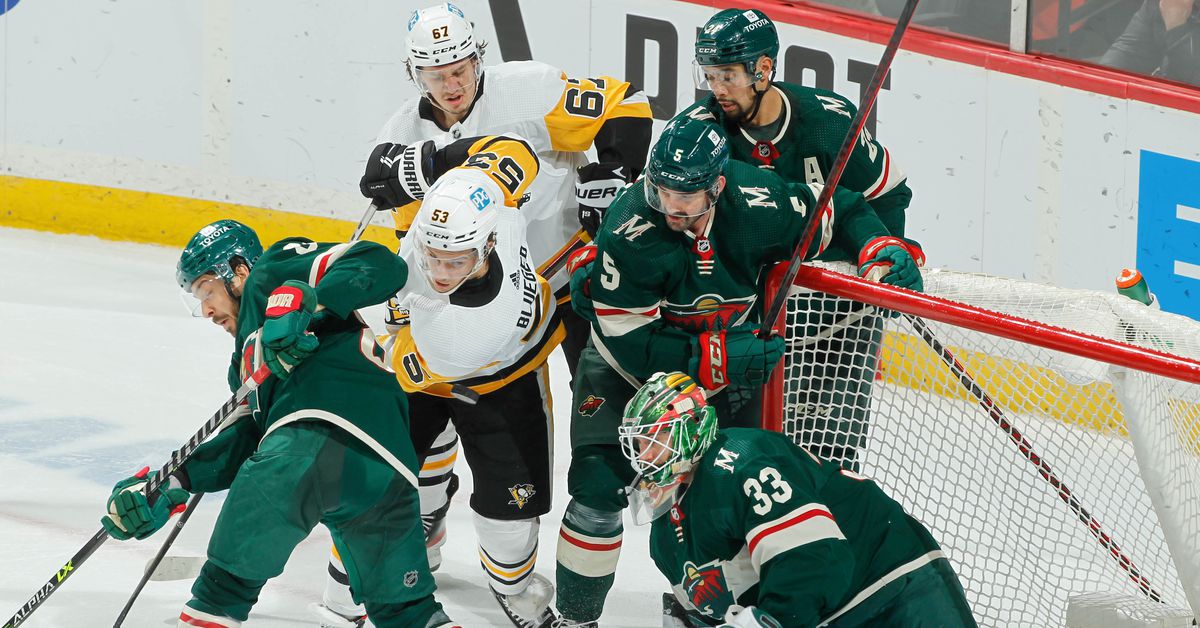 The night started with the Wild welcoming the return of Jason Zucker on Thursday night for the first time as a visitor, as the Penguins simultaneously were welcoming Zucker back to the lineup following a long injury absence. Unfortunately there was also another injury exit for Jason Zucker to follow after a scary looking leg injury that happened in the second period.

Before that unfortunate part, Pittsburgh would jump out to an early lead at the charmed 66 second mark of the game. New acquisition Rickard Rakell racked up his first goal of two goals on the night, tipping in a John Marino shot.

Fun fact: Jason Zucker has been back less than two minutes and he already has an assist.

Rickard Rakell tallies his second goal as a member of the Penguins. pic.twitter.com/UVrpMKJii8

Beforehand, there was a bit of a ref show, with the zebras inserting themselves and setting an awfully ticky tack level for penalties. It sent the Pens’ to the box three times in the first period, swung the other way with three Wild penalties in the second.

Matt Dumba would get the Wild on the board on one of their power plays, just barely getting the puck over the line in a scramble before Kris Letang could bail out his goalie.

The Pens would match on a power play of their own early in the second period to retake the lead. Kris Letang gets career assist #500 when he shoots the puck and Cam Talbot stops it. But the rebound kicks out quickly to Jake Guentzel, who just as quickly returns to send past Talbot. 2-1 Pittsburgh.

Pittsburgh stretches it to a 3-1 lead on the sequence that caused Zucker’s injury. Sidney Crosby jumps on the ice with Evgeni Malkin’s linemates because Malkin got rocked by a big, clean hit from Dumba that took some wind out of his sails. Crosby collected the puck and hit up the ice for a 2-on-1 with Rakell. Jonas Brodin is a great defensive defenseman but he looks silly on this one spiraled across the ice and unable to stop Crosby’s pass. Rakell lifts the puck over Talbot and it’s a 3-1 game.

The Wild think they have gotten one back, but Pittsburgh’s eagle eyed video coaches have seen it’s slightly offsides on the rush entering the zone and a challenge is instituted. Goal is taken away, rather quickly.

The hockey deities must not have approved, because Minnesota scores on the following shift. It’s former Penguin Freddy Gaudreau finding a soft spot in the slot and firing the puck past Casey DeSmith to bring the Wild back to 3-2, for reals this time.

Minnesota would tie the game early in the third. Pretty slick play by Ryan Hartman to bank the puck off the back of the net to himself and then center it for Kirill Kaprizov. Teddy Blueger can’t quite get there in time, and yep, that’s going to be a goal more often than not. 3-3 game with 18:58 to go.

The third ends with no further scoring to necessitate overtime. Evgeni Malkin would finish the game off on a third effort, finally banging the puck past Talbot to end the game and give Pittsburgh the win.

Gritty effort for the Pens to find a way to pickup the win against the league’s hottest team, in their barn and break a long winning streak. The bad news is that the Pens will probably be feeling this one for a while, depending on Zucker’s status moving forward.