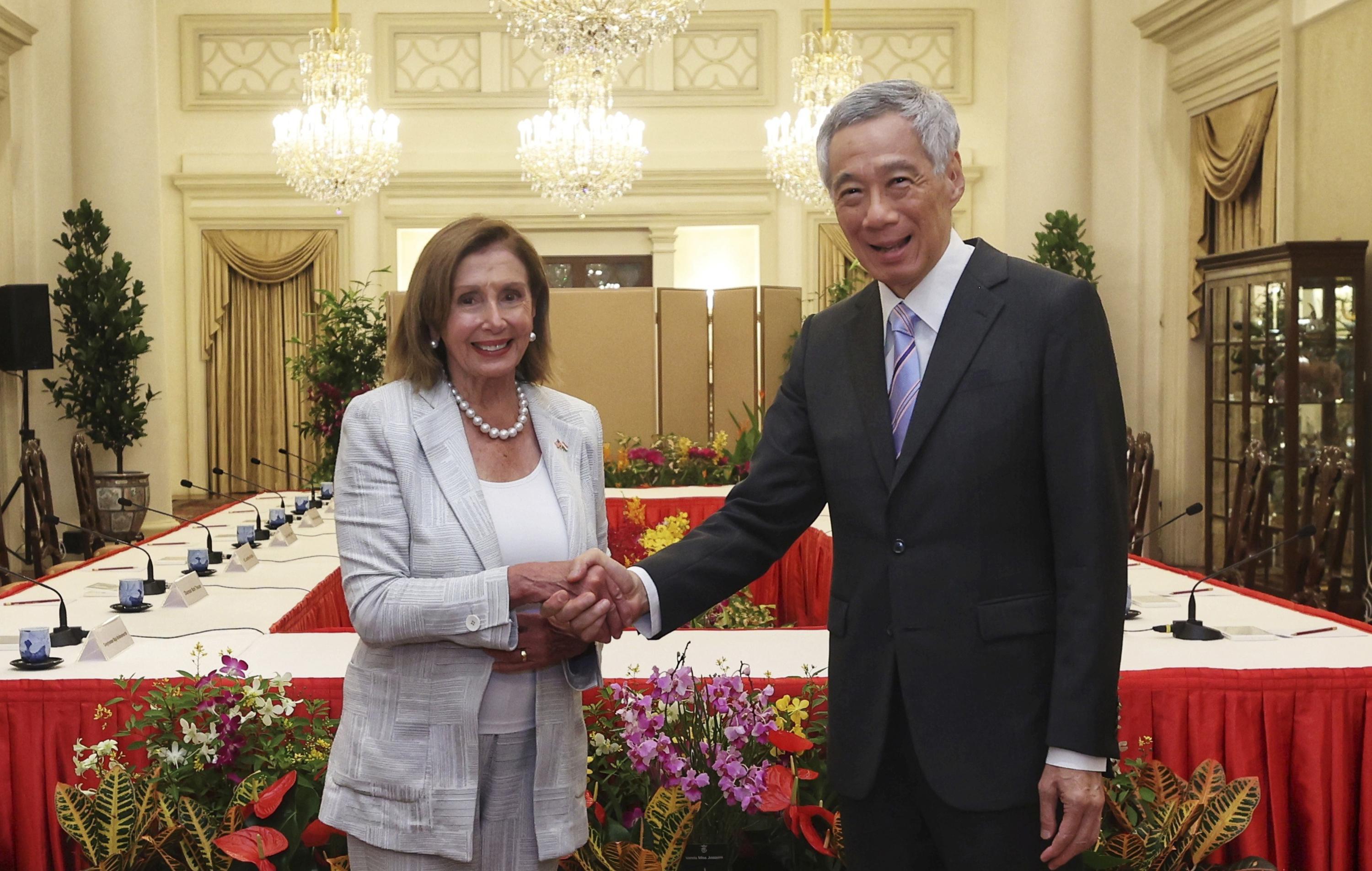 KUALA LUMPUR, Malaysia (AP) — US House Speaker Nancy Pelosi held talks with officials in Singapore on Monday at the start of her Asian tour, the questions swirled over a possible stop in Taiwan that has fueled tension with Beijing.

Lee welcomed a US commitment to strong engagement with the region, and two sides discussing ways to deepen US economic engagement through initiatives such as the Indo-Pacific Economic Framework, the ministry said in a statement.

Lee and Pelosi also discussed the war in Ukraine, tensions surrounding Taiwan and mainland China, and climate change, it said. Lee “highlighted the importance of stable US-China relations for regional peace and security,” it added, in an apparent allusion to reports that Pelosi may visit Taiwan.

In a statement over the weekend, Pelosi said she will visit Singapore, Malaysia, South Korea and Japan to discuss trade, the COVID-19 pandemic, climate change, security and “democratic governance.”

She didn’t confirm news reports that she might visit Taiwan, which is claimed by Beijing as its own territory. Chinese President Xi Jinping warned against meddling in Beijing’s dealings with the island in a phone call last week with US President Joe Biden.

In Beijing, Chinese Foreign Ministry spokesperson Zhao Lijian reiterated the earlier warnings on Monday, saying “there will be serious consequences if she insists on making the visit.”

He did not spell out any specific consequences. “We are fully prepared for any eventuality,” he said. “The People’s Liberation Army will never sit by idly. China will take strong and resolute measures to safeguard its sovereignty and territorial integrity.”

China has been steadily ratcheting up diplomatic and military pressure on Taiwan. Threats of retaliation over a visit by Pelosi have driven concerns of a new crisis in the Taiwan Strait, which separates the two sides, that could roil global markets and supply chains.

Pelosi was to attend the cocktail reception later Monday with the American Chamber of Commerce in Singapore. There is no media access to her visit, which has been kept under tight wraps.

She is scheduled to be in Malaysia on Tuesday. A Parliament official, who was not authorized to speak to the media and declined to be identified by name, said Pelosi will call on Malaysian lower house speaker Azhar Azizan Harun. No further details are immediately available.

On Thursday, Pelosi is to meet with South Korean National Assembly Speaker Kim Jin Pyo in Seoul for talks on security in the Indo-Pacific region, economic cooperation and the climate crisis, Kim’s office said in a statement.

It declined to provide further details about her itinerary, including when she is arriving in South Korea and how long she’ll stay.

Pelosi’s schedule for Wednesday remains unclear and there were no details on when she will head to Japan.

Beijing sees official American contact with Taiwan as encouragement to make the island’s decades-old de facto independence permanent, a step US leaders say they don’t support. Pelosi, head of one of three branches of the US government, would be the highest-ranking elected American official to visit Taiwan since then-Speaker Newt Gingrich in 1997.

The Biden administration has tried to assure Beijing there was no reason to “come to blows” and that if such a visit occurred, it would signal no change in US policy.

Taiwan and China split in 1949 after the Communists won a civil war on the mainland. Both sides say they are one country but disagree over which government is entitled to national leadership. They have no official relations but are linked by billions of dollars of trade and investment.

The United States switched diplomatic recognition from Taipei to Beijing in 1979, but maintains informal relations with the island. Washington is obligated by the Taiwan Relations Act, a federal law, to see that Taiwan has the means to defend itself.

Washington’s “One China policy” says it takes no position on the status of the two sides but wants their dispute resolved peacefully. Beijing promotes an alternative “One China principle” that says they are one country and the Communist Party is its leader.

John Kirby, a White House national security spokesman, told CNN that the US “shouldn’t be intimidated” by China’s rhetoric or threats to retaliate if Pelosi visits Taiwan.

“We want to make sure that when she travels overseas, she can do so safely and securely,” Kirby told CNN on Monday. “There’s no reason for the Chinese rhetoric. There’s no reason for any actions to be taken. It is not uncommon for congressional leaders to travel to Taiwan, it is very much in keeping with our policy and is consistent with our support to Taiwan under the Taiwan Relations Act.”

A visit to Taiwan would be a career capstone for Pelosi, who increasingly uses her position in Congress as a US emissary on the global stage. She has long challenged China on human rights and wanted to visit Taiwan earlier this year.