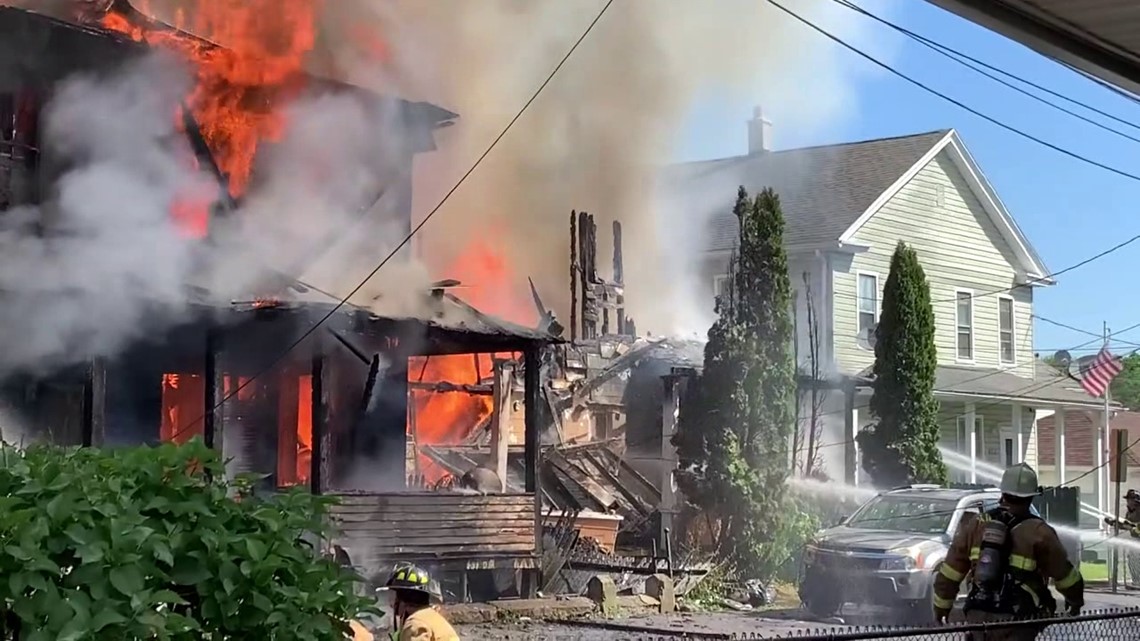 LUZERNE COUNTY, Pa. — One person is dead after firefighters across Luzerne County came together to put out what they say is one of the worst house fires they’ve seen in their careers.

Black smoke filled the air as flames tore through several homes on Palmer Street in Plymouth Sunday morning calling for a massive response from fire departments across Luzerne County, closing several streets in the borough.

“About 9:30 am this morning we were called for a working fire with a possible entrapment. Upon arrival of the first engine, we had heavy fire on a double block from the porch all the way to the second floor,” said Robert Palchanis , Plymouth Borough Assistant Fire Chief.

Four buildings were involved in the fire including eight homes, as they were all double-block homes. All but one are now considered uninhabitable.

“Two fully involved double blocks from the beginning. It started in the 401/403 house. We did have some damage to the side which is another double block and probably a total loss,” said Assistant Chief Palchanis.

Nearly a dozen are displaced now because of the fire. All but one resident was able to make it out safely.

“We did have a confirmed entrapment. due to the fire load, and the amount of fire, we were not able to make fire entry at the time. We strictly went defensive,” said Assistant Chief Palchanis.

The Luzerne County coroner confirms one person died in the fire, their identity if not being released at this time.

“Wearing all this gear, the humidity, the heat, it takes a toll on us which is why two guys went down,” explained Assistant Chief Palchanis.

However, the fire departments greatly appreciate how the local residents stepped up to help despite not having power for seven hours, “It helped us immensely with the manpower but unfortunately we did lose two houses due to it. So with all the outside help, it was greatly appreciated,” said Assistant Chief Palchanis.

The state police fire marshal is investigating the cause of the fire. An autopsy for the victim is scheduled for Monday morning.