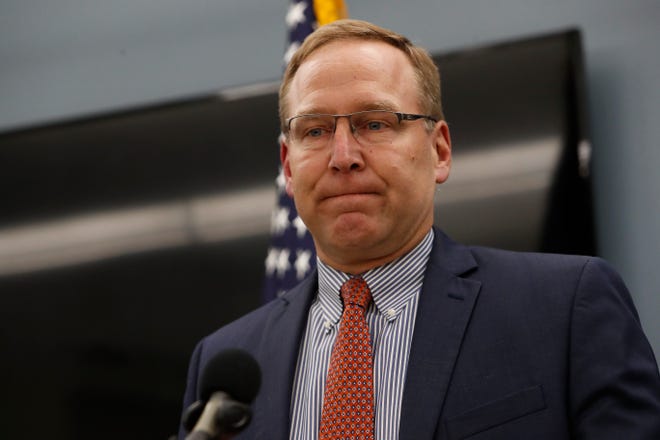 The order was issued in response to a request from Gov. Gretchen Whitmer after the Court of Appeals ruled earlier Monday that county prosecutors were not blocked from enforcing the state’s long-dormant abortion ban by a preliminary injunction issued in the Court of Claims.

In his order, Cunningham said the order was “necessary to prevent the immediate and irreparable injury that will occur if defendants are allowed to prosecute abortion providers under (the 1931 law) without a full resolution of the merits of the pending cases challenging the statute. “

The judge scheduled a Zoom hearing on the matter for Wednesday.

Cunningham’s order came shortly after Whitmer made the request in her lawsuit against 13 county prosecutors with abortion clinics in their counties.

Whitmer sought the injunction just came hours after the Court of Appeals ruled an injunction in a separate Planned Parenthood of Michigan case challenging Michigan’s abortion ban did not extend to county prosecutors, just state officials such as the attorney general.

Several county prosecutors have said they would enforce the law if brought a case that met the threshold set by the 1931 law. But Planned Parenthood, the plaintiff in that case, said prosecutors are barred from acting on Monday’s Court of Appeals decision during a 42-day appeal window.

“…healthcare providers in Michigan are presently forced to choose whether to continue offering healthcare services to women in this state or potentially face criminal prosecution, creating irreparable harm for women who need healthcare now,” Whitmer’s motion for a temporary restraining order said.

The Michigan Court of Appeals’ Monday ruling could allow county prosecutors to file criminal charges against doctors and health workers who provide abortion services under Michigan’s 1931 abortion ban. The 91-year-old law contains a narrow exception for abortion in cases when terminating a pregnancy is necessary to save the life of the mother.

Planned Parenthood of Michigan has the prosecutor the ruling doesn’t take effect for 42 days — the window for a potential appeal to the Michigan Supreme Court — and any who attempts to enforce the law before that appeal period is expired should be held in contempt of the court order.

“Planned Parenthood of Michigan will continue to provide abortion services in accordance with the law,” a statement from the group said. “PPMI patients can keep their appointments and our doors remain open.”

But David Kallman, a lawyer for the two prosecutors in the case, pushed back on the group’s claim that an appeal period stayed the effectiveness of the ruling. The wording of the order doesn’t just say prosecutors are free to enforce the law going forward; the order says county prosecutors were never blocked from enforcing the law in the first place, Kallman said.

While prosecutors differ county-by-county on whether they will enforce the 1931 law, hospitals and health care systems say they’re trying to keep up with the varying developments in Michigan courts and adjust their policies accordingly.

In their Monday order, the appeals court judges said the Michigan Catholic Conference, Right to Life of Michigan and the two prosecutors lack standing to request Court of Claims Judge Elizabeth Gleicher’s injunction in a suit filed by Planned Parenthood of Michigan be overturned and her case assumed by the higher court. Gleicher’s injunction has been in place since May, before the US Supreme Court overturned a half-century of abortion rights on June 24.

“The preliminary injunction does not apply to county prosecutors,” the three-judge panel wrote.

“That’s exactly what we wanted,” he said of Jarzynka and Becker. “They were both very pleased with the result.”

“Neither of them has a pending case in front of them right now. If a case is brought to them and the elements are there, they will proceed,” Kallman added.

Right to Life of Michigan and Michigan Catholic Conference, on the other hand, lack standing because “they have not suffered any injury as a result of it,” the Courts of Appeals judges ruled.

Becker in a Monday statement said he appreciated “the clarification” from the Court of Appeals.

“I cannot and will not ignore the validly passed law,” Becker said. “If a report is presented to this office, we will review it like we do any other report of possible criminal behavior.”

Likewise, Jarzynka said he was bound by the state’s “validly passed law on abortion.”

“If a police agency submits a police report for a possible violation of Michigan’s abortion statute, we will review it like we do for any other report for possible charging and it will depend on what evidence is submitted and can we prove a criminal charge beyond a reasonable doubt,” Jarzynka said.

Prosecutors in Cass, Charlevoix, Clinton, Hillsdale and Saginaw counties told The News on Monday they would also enforce the law if presented with findings meeting the criteria for a violation of the state’s abortion ban.

Implications of the ruling are being considered by health care systems with hospitals or clinics in counties where prosecutors have indicated they are willing to enforce the 1931 abortion ban.

“We are aware of the Michigan Court of Appeals’ decision. We’re reviewing the implications for our patients and providers,” Henry Ford Health, which has hospitals in Jackson and Macomb counties, said in a statement released Monday.

McLaren Health Care owns more than a dozen hospitals in Michigan including McLaren Macomb Hospital, as well as hospitals in Ohio and Indiana.

Ohio enacted a “heartbeat” law immediately following the US Supreme Court’s rollback of Roe v. Wade, and the Legislature there is considering a near-total ban. In Indiana, the GOP-controlled Senate passed a bill that would ban abortion at all stages with nearly no exceptions during a specially agreed session on Saturday.

“We are working with our patients and providers to stay aware of the changing laws while also ensuring the care provided is within those laws,” Klamerus added. “We will continue to closely monitor legal proceedings occurring nationally and within state jurisdictions where we operate in Michigan, Ohio and Indiana.”

The Monday order from Court of Appeals judges Stephen Borrello, Michael Kelly and Michael Gadola came after the groups requested the higher court exercise superintending control by taking jurisdiction of Gleicher’s case and vacating her injunction.

Gleicher issued her injunction in May in a suit brought by Planned Parenthood of Michigan against Attorney General Dana Nessel. She ruled Planned Parenthood was likely to succeed on the argument that there was a right to abortion in Michigan’s constitution that overrode the state abortion ban, a law that dates back to the 1840s.

The judge ordered Nessel, who declined to defend against the suit, to convey her order to county prosecutors.

But Jarzynka and Becker pushed back, arguing the injunction could not extend to them since they were county officials with their own authority independent from Nessel’s. Nessel has argued as much in the past as well.

“…under the totality of the circumstances, the core nature of a county prosecutor is that of a local, not a state official,” the panel wrote. “Because county prosecutors are local officials, jurisdiction of the Court of Claims does not extend to them.”

Kallman noted that, under the law, prosecutions of abortion-related crimes have a six-year statute of limitations. While some prosecutors might now be committing not to prosecute abortion, their successors could decide to do so.

Monday’s Appeals Court ruling came three days after Gleicher denied a motion from the GOP-led Michigan House and Senate to disqualify herself from the litigation because she has made donations to Planned Parenthood in the past.

Gleicher ruled Friday that recusing herself over “small contributions” to the abortion provider would be “simply unprecedented.”

At least seven Democratic county prosecutors said earlier this year they would not enforce the abortion ban within their jurisdictions. The prosecutors refusing to enforce include those representing Wayne, Oakland, Ingham, Washtenaw, Genesee, Marquette and Kalamazoo counties.

Other county prosecutors earlier this year said they hoped the Legislature would make amendments to the law since its last update was more than nine decades ago.

“It needs to be updated before they expect local prosecutors to take away people’s liberty based on that,” St. Clair County Prosecutor Mike Wendling said in May.

Apart from the filing seeking superintending control, the House and Senate have filed appeals in the Court of Appeals regarding Gleicher’s ruling. That appeal is still pending.

The same day Planned Parenthood of Michigan filed its case against the attorney general in April, Whitmer filed a separate suit against 13 county prosecutors in Oakland County Circuit Court seeking a similar ruling that found a right to abortion is already enshrined in the state constitution.

Whitmer also made several requests to the Michigan Supreme Court, asking the justices to rule on her case rather than allowing it to be decided and appealed in the lower courts first.

The state Supreme Court has not yet committed to taking up the case by bypassing lower courts, but the higher court did send several follow-up questions to Whitmer and has been allowing differing parties to weigh in via amicus briefs.

Whitmer’s filing for a temporary restraining order is one of the most significant filings in the Oakland County case in recent weeks. The Oakland County lawsuit has largely been the more sedate of the two suits while the Planned Parenthood preliminary injunction was believed to have blocked county prosecutors.

From the start, state officials had argued the Oakland County prosecutor would address the issue of county prosecutors more directly than the Planned Parenthood case. Nessel pointed out as much earlier this year.

“Planned Parenthood would be better off if they were focusing on the governor’s case and filing an amicus on behalf of the governor and her actions,” Nessel said in May.