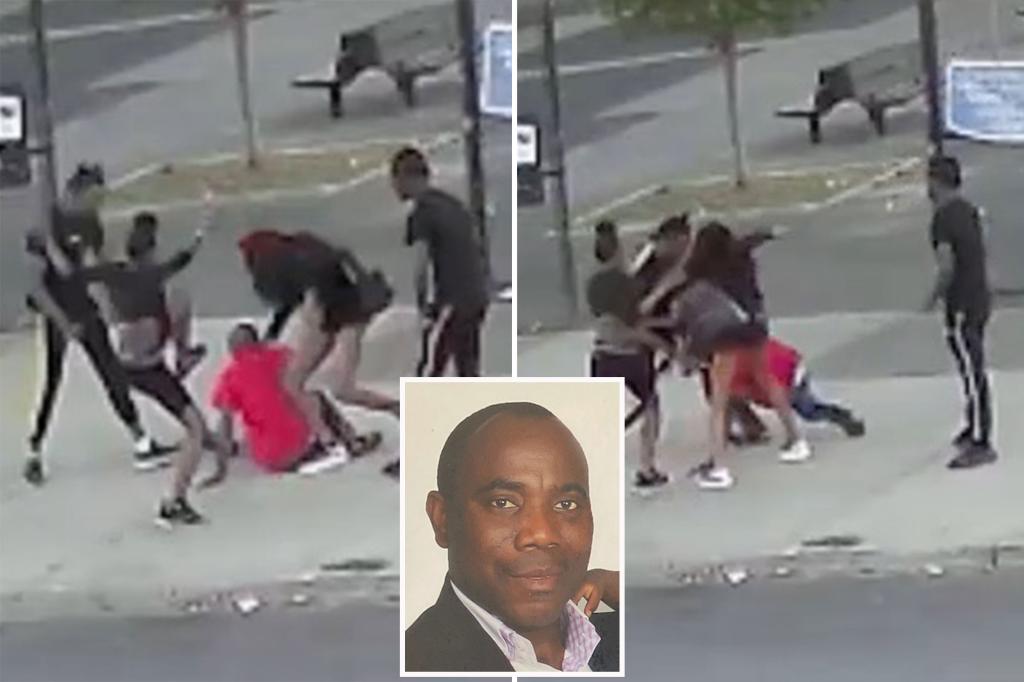 The NYPD released horrifying video of the brutal beatdown that killed a New York City taxi driver over the weekend as they identified one of the five suspects wanted for the senseless crime.

Austin Amos, 20, and four other passengers allegedly carried out the assault on Kutin Gyimah, 52, after they tried to rob the cabbie around 6:30 am Saturday in the Rockaways, police said.

Cops said Amos was last wearing clothing that matches that of the person who landed the final blow on Gyimah, sending him flying to the pavement outside Arverne Playground, the video released Wednesday shows.

Giymah, a married father of four from the Bronx, hit his head on the street and couldn’t be saved.

One other man, believed to be in his 20s, and three teenage girls are also wanted in the fatal attack, police said.

Giymah had chased the group down the street after they fled from the backseat of his cab at Beach 54th Street and Arverne Boulevard. He caught up to them and held one person down, sources have said, but the other returned and ganged up on him.

Footage of the assault shows the suspects punching Gyimah multiple times and kicking him as he falls to the pavement. As four of the five people begin to walk away, one of the men in the group walks towards Gyimah and socks him up high.

Gyimah attempts to put his hands up the shield himself from the attacker, but is instead knocked to the sidewalk where he hits his head and lays limp. The suspects walk away, leaving the cab driver lying there motionless.

He was pronounced dead at St. John’s Hospital, while the pack of would-be thieves fled.

There have been no arrests. The New York State Federation of Taxi Drivers is offering a $15,000 reward for information leading to an arrest.

His widow said her husband was a hard worker who never stopped working during the pandemic.

“He was a good, good man,” Abigail Barwuah said. “He was my backbone.”