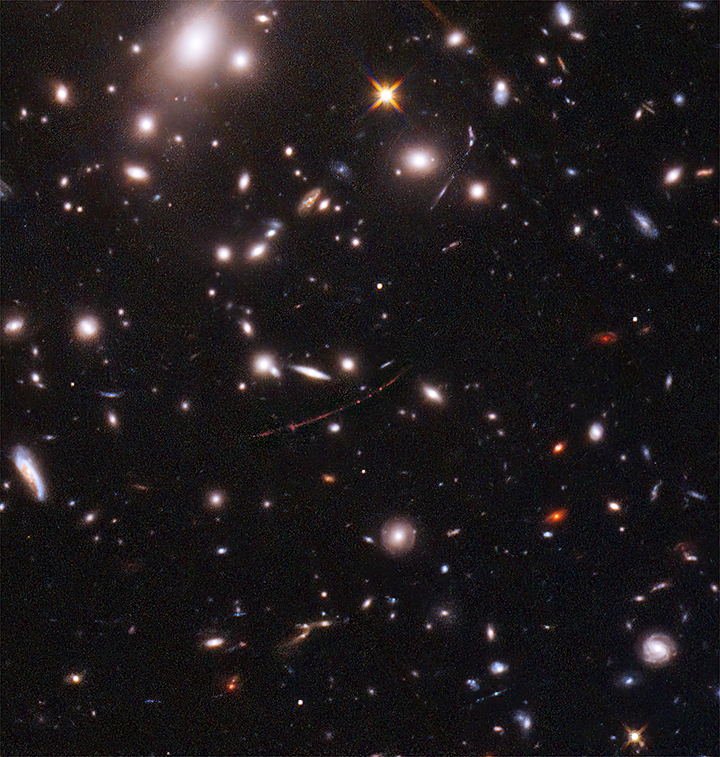 NASA’s Hubble Space Telescope has detected the light of the farthest individual star ever seen to date.

The agency said that the star existed within the first billion years after the universe’s birth in the Big Bang.

NASA said the previous single-star record holder was detected by the telescope in 2018. That star existed when the universe was about 4 billion years old, during the “redshift.”

“Redshift” refers to the light from distant objects traveling toward Earth that is stretched or “shifted” to longer, redder wavelengths as the universe expands.

This star is so far away that its light has taken 12.9 billion years to reach Earth, and looks as when the universe was at redshift 6.2 – or 7% of its current age.

“We almost didn’t believe it at first, it was so much farther than the previous most-distant, highest redshift star,” Brian Welch, Johns Hopkins University astronomer and lead author of the paper describing the discovery, said in a statement.

This detailed view highlights the star Earendel’s position along a ripple in space-time that magnifies it and makes it possible for the star to be detected over such a great distance—nearly 13 billion light-years. A cluster of stars that is mirrored on either side of the line of magnification is also highlighted.
(Credits: Science: NASA, ESA, Brian Welch (JHU), Dan Coe (STScI); Image processing: NASA, ESA, Alyssa Pagan (STScI))

The discovery was made from data collected during Hubble’s RELICS (Reionization Lensing Cluster Survey) program.

After studying the galaxy in detail, Welch determined that one feature is an extremely magnified star called Earendel, or “morning star” in Old English.

“Earendel existed so long ago that it may not have had all the same raw materials as the stars around us today,” Welch explained.

“Studying Earendel will be a window into an era of the universe that we are unfamiliar with, but that led to everything we do know. It’s like we’ve been reading a really interesting book, but we started with the second chapter, and now we will have a chance to see how it all got started,” he said.

Earendel is at least 50 times the mass of the sun and millions of times brighter. It is naturally magnified by galaxy cluster WHL0137-08.

It appears directly on or close to a ripple – or “caustic” – in the fabric of space, which provides maximum magnification and brightening.

The caustic causes Earendel to stand out, with Its brightness is magnified a thousandfold or more.

Astronomers expect it will remain highly magnified for years to come, and it will be observed by NASA’s James Webb Space Telescope.

Scientists are currently not able to determine if Earendel is a binary star and its composition will be of great interest because it formed before the universe was filled with the heavy elements produced by successive generations of massive stars.

If additional research finds that Earendel is only made up of primordial hydrogen and helium, it would be the first evidence for the legendary Population III stars: the very first stars born after the Big Bang.

“With Webb, we may see stars even farther than Earendel, which would be incredibly exciting,” Welch said. “We’ll go as far back as we can. I would love to see Webb break Earendel’s distance record.”

The smallest objects previously seen at such a great distance are clusters of stars.