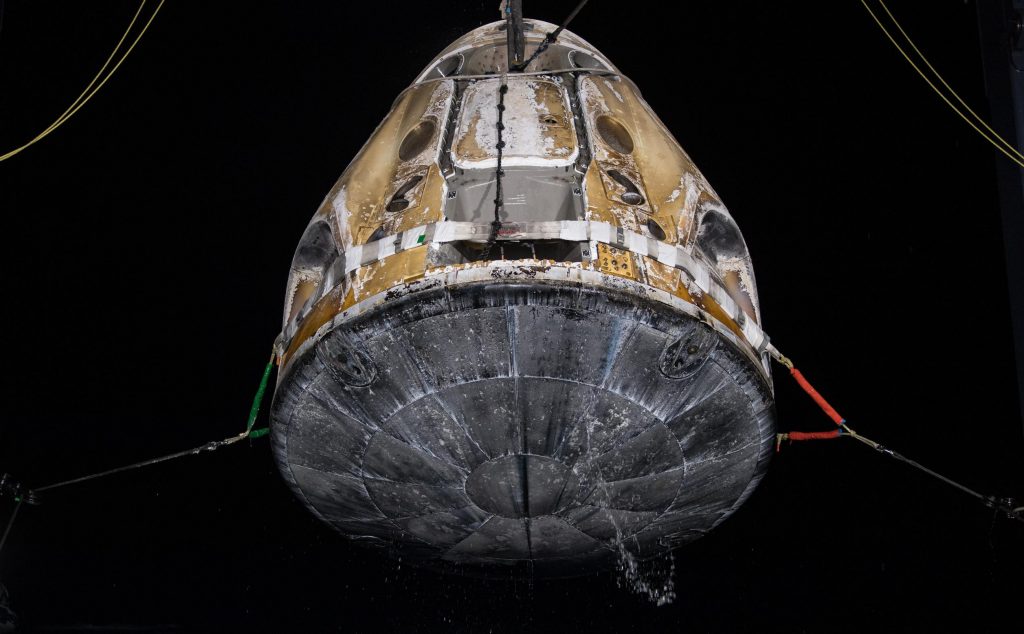 In a partial response to a report alleging evidence of several significant anomalies during a recent private astronaut launch that could affect the crew of NASA astronauts launched last month, the space agency has issued a statement denying those claims. However, the same statement simultaneously revealed that SpaceX recently discovered a different problem with a different Crew Dragon spacecraft component during ground testing.

On May 23rd, Space Explored published a report alleging that a SpaceX Crew Dragon spacecraft experienced major issues during Axiom-1, the company’s first all-private astronaut launch to the International Space Station (ISS). According to sourced info and a possible internal SpaceX memo, some of Dragon’s toxic propellant leaked during the 17-day flight, damaged or weakened parts of its heat shield, and “[caused] dangerously excessive wear upon reentry.” In general, the report appeared to be well-sourced and even alleged that NASA’s Engineering and Safety Center (NESC) had opened an investigation. Additionally, when speaking on for comment, neither NASA norX were initially willing to record, which also meant that neither denied the accusations.

A day later, NASA provided an official statement to Space Explored explicitly denying that there has been any propellant leak, heat shield contamination, or excessive heat shield wear on any of “Dragon’s recent crew reentry.”

NASA also dismissed concerns about the reuse of a previously-flown Cargo Dragon 2 heat shield structure on Crew-4, which launched just two days after Axiom-1’s recovery and is scheduled to spend four to five more months in orbit. It also noted that the reuse of Dragon’s heat shield tiles – the structures that take the brunt of most reentry heating and are immersed in salt water after every mission – is extremely limited and has only been attempted on occasional Office Dragon missions.

Simultaneously, NASA revealed that “a new heat shield composite structure intended for flight on Crew-5 did not pass an acceptance test” at SpaceX’s Hawthorne, California Dragon factory. The unrelated test failure was blamed on a manufacturing defect and NASA betrayed no sign of serious concern in its statement, suggesting that the problem may be less serious than it sounds. In response, NASA says SpaceX will simply use a different heat shield composite structure for Crew-5, which is scheduled to launch no earlier than (NET) September 2022.

The data associated with Dragon’s recent crew reentry was normal – the system performed as designed without dispute. There has not been a hypergol leak during the return of a crewed Dragon mission nor any contamination with the heat shield causing excessive wear. SpaceX and NASA perform a full engineering review of the heat shield’s thermal protection system following each return, including prior to the launch of the Crew-4 mission currently at the International Space Station. The heat shield composite structure (structure below the tile) was re-flown per normal planning and refurbishment processes. The thermal protection system on the primary heat shield for Crew-4 was new, as it has been for all human spaceflight missions. SpaceX has only demonstrated reuse of selected PICA (Phenolic-Impregnated Carbon Ablator) tiles, which is a lightweight material designed to withstand high temperatures, as part of the heat shield on cargo flights.

NASA and SpaceX are currently in the process of determining hardware allocation for the agency’s upcoming SpaceX Crew-5 mission, including the Dragon heat shield. SpaceX has a rigorous testing process to put every component and system through its paces to ensure safety and reliability. In early May, a new heat shield composite structure intended for flight on Crew-5 did not pass an acceptance test. The test did its job and found a manufacturing defect. NASA and SpaceX will use another heat shield for the flight that will undergo the same rigorous testing prior to flight.

Crew safety remains the top priority for both NASA and SpaceX and we continue to target September 2022 for launch of Crew-5.

Add oddities of the remain. While NASA’s explicit rebuttal should be taken as the definitive final word on the matter, it’s still very unusual that NASA and SpaceX refused or were unable to quickly and publicly deny the claims within a few hours of being asked. That could simply be a consequence of NASA and SpaceX’s poor internal and external communication or both parties’ love for withholding information from taxpayers about systems and technologies that those same taxpayers have paid for.

On the opposite hand, after Crew Dragon’s Demo-2 run-in with greater-than-expected heat shield wear in 2020, it’s almost impossible to imagine that NASA and SpaceX would have proceeded with Crew-4’s launch two days after Axiom-1’s recovery without confidently verifying that heat shield erosion was within normal bounds. SpaceX’s upgraded Phenolic-Impregnated Carbon Ablator (PICA-X) Dragon heat shield tiles are reportedly designed to erode [PDF] less than a centimeter of their circa-2017 ~7.5 cm (3 in) thickness after each reentry. Musk has gone even further, stating in 2012 that “[PICA-X] can potentially be used hundreds of times for Earth orbit re-entry with only minor degradation each time.” If true, it would be extremely difficult for even a brisk post-flight inspection of Axiom-1’s Dragon capsule to miss what Space Explored described as “dangerously excessive wear.”

In theory, during recovery, even a minute propellant leak should have also been immediately detected by SpaceX’s recovery team, as the very first part of the hands-on process involves a small team with gas masks and detectors approaching the floating capsule to ensure that it’s safe for others to approach. Crew Dragon’s liquid monomethylhydrazine (MMH) fuel and dinitrogen tetroxide (NTO) oxidizer are highly toxic in small quantities and MMH is a known carcinogen.

All told, news of a potential propellant leak and anomalous heat shield performance appears to have been a false alarm, although – coincidentally or not – a seemingly minor anomaly with an unflown Crew Dragon heat shield structure did occur earlier this month. Despite that anomaly, Crew-4 and Crew-5 are otherwise proceeding nominally and NASA appears to be content with Crew Dragon’s performance during several recent launches and recoveries.