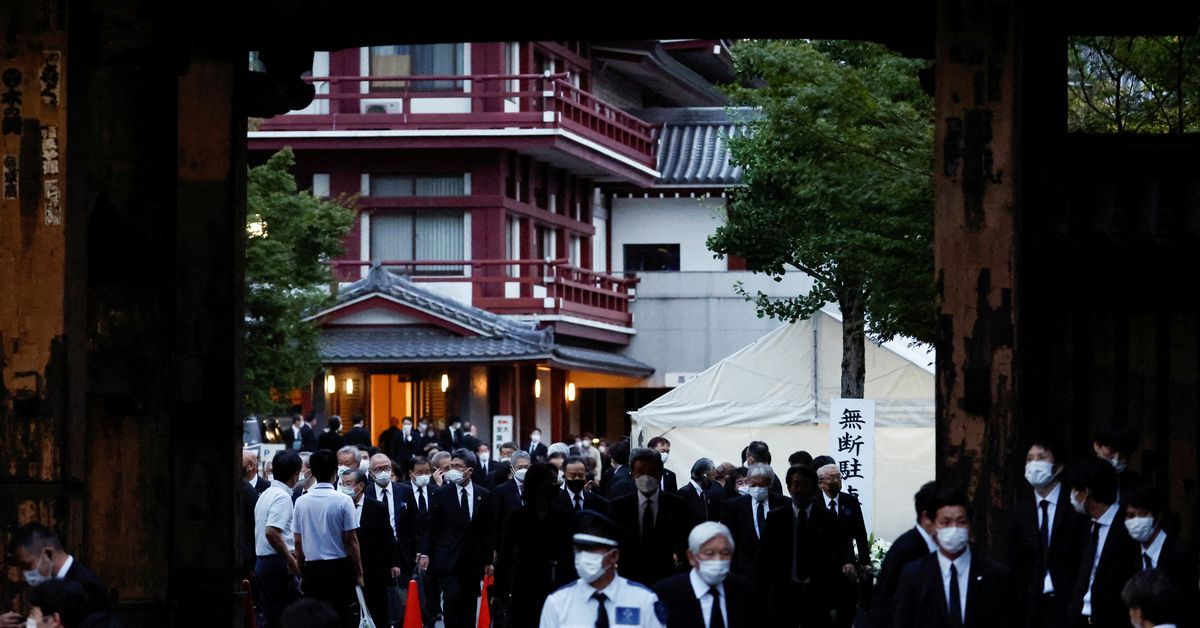 TOKYO/NARA, July 11 (Reuters) – Mourners streamed into a temple in Tokyo to pay their respects to Japan’s slain former premier Shinzo Abe on Monday, as his assassination overshadowed an election win for the ruling party he had dominated.

Current Prime Minister Fumio Kishida, who has the chance to cement his own power following Sunday’s election gains, and US Treasury Secretary Janet Yellen were among the hundreds at Abe’s wake, three days after he was shot at an election rally.

A private funeral for Abe, who resigned in 2020 and was Japan’s longest-serving premier, is scheduled for Tuesday.

“There is a profound sense of sorrow at his loss,” Yellen told reporters outside the temple, where she placed incense in Abe’s honor and greeted his family.

“Prime Minister Abe was a visionary leader and he strengthened Japan…I know that his legacy will live on,” she added.

Abe’s shooting shocked a nation where political violence and gun crime is rare.

The suspected killer, arrested at the scene and identified by police as 41-year-old Tetsuya Yamagami, believed Abe had promoted a religious group to which his mother made a “huge donation”, Kyodo news agency has said, citing investigators.

The Unification Church, a controversial group known for its mass weddings and devoted following, said on Monday the suspect’s mother was one of its members. read more

Neither Abe nor Yamagami were members of the church, said Tomihiro Tanaka, president of its Japan branch, adding that it would cooperate with police if asked to do so. read more

Reuters was not immediately able to contact Yamagami’s mother and could not determine whether she belonged to any other religious organisations.

In elections held on Sunday, the Liberal Democratic Party (LDP) and its ruling coalition partner extended their majority in the upper house of parliament. With a majority already in place in the lower house, what would have been a celebratory mood at LDP headquarters in usual circumstances turned sombre. read more

A moment of silence for Abe was offered in his memory, and Kishida’s face grim as he pinned rosettes remained next to winning candidates’ names on a board in a symbol of their victory.

Officials and mourners attend the vigil for late former Japanese Prime Minister Shinzo Abe, who was shot while campaigning for a parliamentary election, at Zojoji Temple, in Tokyo, Japan July 11, 2022. REUTERS/Issei Kato

Abe’s death has drawn condolences from leaders around the world, from Britain’s Queen Elizabeth to Chinese Premier Xi Jinping.

US Secretary of State Antony Blinken met with Kishida during a brief stopover on Monday to offer messages of support on behalf of President Joe Biden.

Vice President William Lai became Taiwan’s most senior official to visit Japan in five decades as he made a private trip to Tokyo to pay his respects. read more

At the wake, a line of black sedan cars, including several with diplomatic plates, dropped off dignitaries and family at Tokyo’s Zojoji temple, where the former premier’s body lay.

Dressed in black, some of those gathered mopped their brows as they queued beneath the steps leading to the temple in the sultry evening air.

A part of the temple was also open to members of the public who crowded in to lay flowers. “I feel so sad that a prime minister who dedicated himself for Japan died this way,” said Naoya Okamoto, a 28-year old who works in construction.

“He was the prime minister who demonstrated to the world a strong Japan once again.”

Abe remained influential in the LDP party even after he stepped down in 2020 citing ill health.

The LDP and its junior partner Komeito won 76 of the 125 seats contested in the chamber, up from 69 previously. The LDP alone won 63 seats, up from 55, to win a majority of the contested seats, though it fell short of a simple majority on its own.

With no elections set for another three years, Kishida, an Abe protects, now has an unusually long breathing space to attempt to implement his own agenda. That includes expanding defense spending and reviewing Japan’s pacifist constitution—his long-held dream of Abe’s. read more

Abe led the largest faction within the LDP, and analysts said his death could lead to potential turmoil within the party that might challenge Kishida’s control.

Kishida told a news conference that he would take up the difficult problems that Abe was not able to resolve, such as revising the constitution, adding that he hoped there could be discussions on the topic during the next session of parliament.

“We gained strength from voters for stable government of this nation,” Kishida told a news conference.