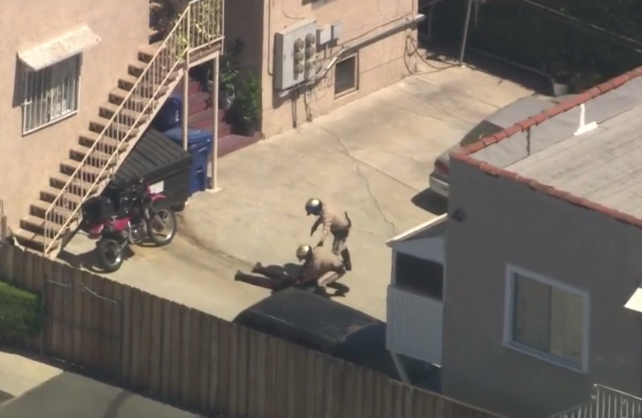 A motorcycle driver was taken into custody in Silver Lake after a pursuit through Los Angeles County Monday morning.

The chase started on the southbound 605 Freeway at Carson, CHP said. The motorcycle rider then headed southbound on the 405 Freeway and eventually made his way to the Echo Park area.

Video from Sky5 showed a CHP motorcycle officer following closely behind the suspect in Elysian Park near Dodger Stadium. A law enforcement helicopter was also hovering above the motorcycle as the rider circled the Echo Park area.

At some point, the motorcyclist appeared to wave at someone and then stand up on his bike as the chase continued.

Around 10:40 am, the motorcycle rider was seen going off-road on a dirt path near the park and then driving onto a grass patch.

At one point, the suspect could be seen nearly striking the officer’s motorcycle and then speeding off.

About ten minutes later, the pursuit ended in Silver Lake, where officers took the suspect into custody outside an apartment building.