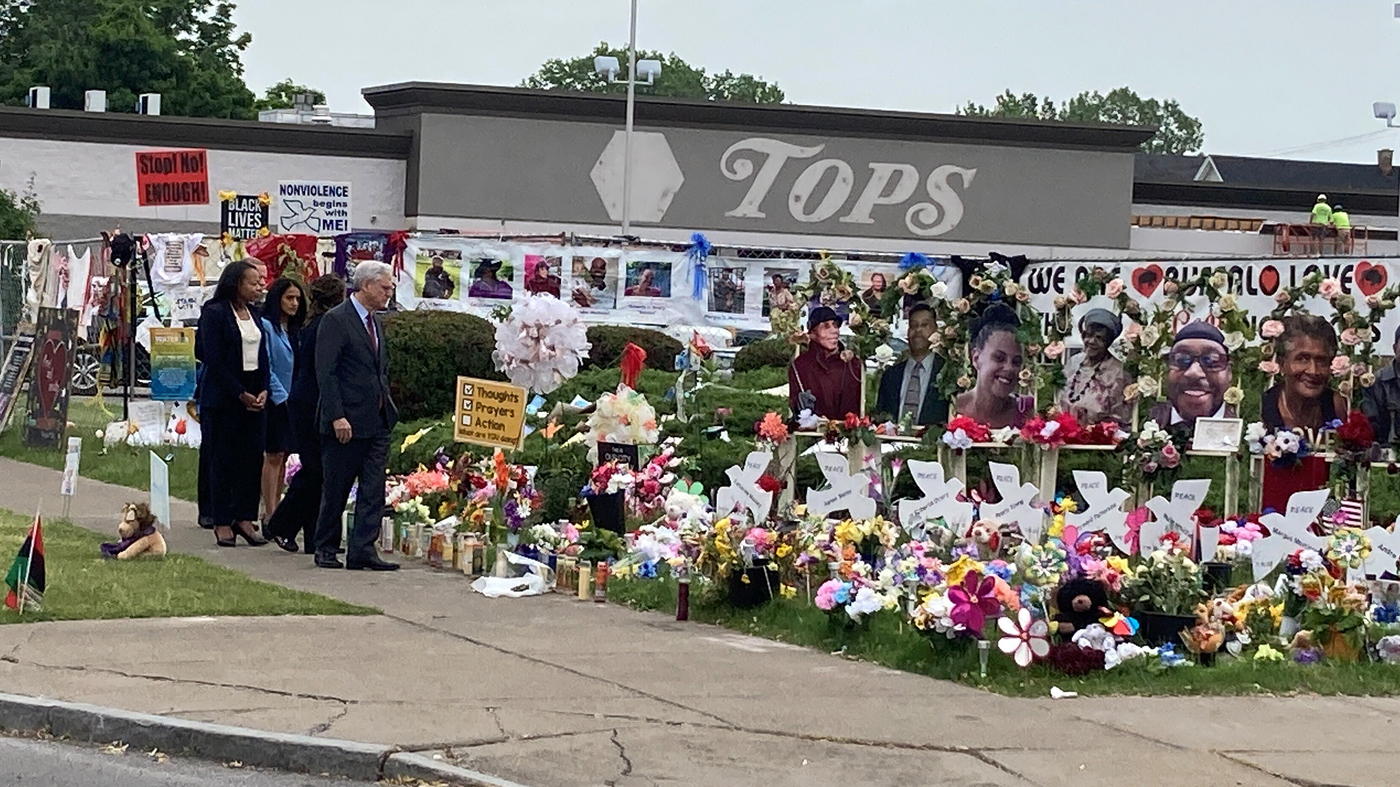 Attorney General Merrick Garland. visits the Tops Friendly Market grocery store in Buffalo, NY, on Wednesday, June 15, 2022, the site of a May mass shooting in which 10 Black people were killed.

Attorney General Merrick Garland. visits the Tops Friendly Market grocery store in Buffalo, NY, on Wednesday, June 15, 2022, the site of a May mass shooting in which 10 Black people were killed.

BUFFALO, NY — The white man who killed 10 Black people at a Buffalo supermarket made his first appearance in federal court on hate crime charges Thursday, and the judge urged prosecutors to quickly decide whether to pursue the death penalty given the “substantial” cost of those cases.

In a brief proceeding, presiding Magistrate Judge H. Kenneth Schroeder said Payton Gendron was eligible to be represented by public defenders based on his financial situation. Fielding a series of questions from the judge mostly with “yes” or “no” responses, Gendron said he had not been employed in a year, had $16 dollars in a bank account, had no car and two shares of Disney stock.

Gendron has been held without bail since his arrest shortly after the May 14 attack at a Tops Friendly Supermarket, which also left three people wounded.

Gendron wore an orange jump suit, shackles and a black mask covering a scruffy beard. He leaned forward slightly in his chair with his head down when the judge read the charges.

No plea was entered during the proceeding.

“It’s hard being here. It’s hard being in a courtroom with a terrorist,” said Zeneta Everhart, one of about two dozen relatives of victims who were in the courtroom. “Seeing the man who tried to kill my son sitting there, sharing the same space with him, is hard.”

Everhart’s 21-year-old son, Zaire Goodman, a Tops employee, was shot in the neck as he helped a customer in the parking lot but survived.

She called being in court “part of my healing process.”

Gendron’s parents were not in the courtroom.

Attorney General Merrick Garland, who met with the victims’ families in Buffalo on Wednesday, has not ruled out seeking the death penalty against Gendron.

In calling for prosecutors to make a quick decision on the death penalty, Schroeder noted such cases typically require expert testimony from psychiatrists and medical examiners.

Federal prosecutor Joseph Tripi said the next step in the process involves an indictment. At that point, it will be the attorney general’s “sole decision” whether to seek the death penalty.

“I’m a Christian person, I don’t wish death on anyone,” a niece of 62-year-old victim Geraldine Talley said after the hearing, “but this right here I have to work with it, because I would rather see him dead.”

The niece, Tamika Harper, vowed to be at every court appearance “for my aunt and the other nine victims.”

“I’m angry, very, very angry,” said Harper, who wore pins on her top with the victims’ pictures. “He has not shown a lick of remorse.”

The federal hate crimes case is based partly on documents in which Gendron detailed his plans for the attack, including the semi-automatic rifle he would use, clothing and body armor he would wear and the portable camera that would allow him to stream the massacre live on the internet.

The writings included “statements that his motivation for the attack was to prevent Black people from replacing white people and eliminating the white race, and to inspire others to commit similar racially-motivated attacks,” according to the complaint.

Gendron was already facing a mandatory life sentence without parole if convicted on previously filed state charges, including hate-motivated domestic terrorism and murder. He has pleaded not guilty.

His lawyer in the state case declined to comment on the federal charges.

Gendron drove more than 200 miles (320 kilometers) from his home in Conklin to the predominantly Black part of Buffalo. There, authorities say, he fired approximately 60 shots at shoppers and workers.

The complaint details his path through the store’s aisles in search of victims as customers and employees ran to take cover in a stock room, conference room, freezer and dairy cooler.

Gendron surrendered to police as he exited the supermarket.