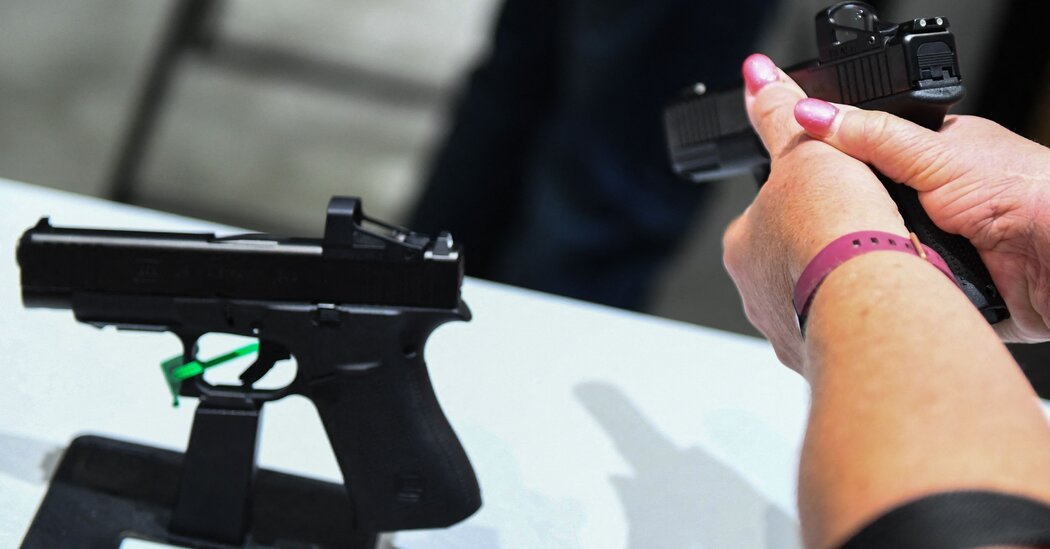 A Florida woman was charged with manslaughter on Monday after her 2-year-old boy found a gun in their home and accidentally shot his father in the back, killing him, the authorities said.

The father, Reggie Mabry, 26, had been playing a video game in their home in Orlando, Fla., last month when one of his three children managed to grab a Glock 19 and fired, according to an arrest report from the Orange County Sheriff’s Office.

Mr. Mabry and his wife, Marie Ayala, 28, were convicted felons and were not allowed by law to own guns, Sheriff John Mina of Orange County said at a news conference on Monday. They were on probation for child neglect and narcotics charges, he said.

Ms. Ayala was charged with manslaughter, culpable negligence and possession of a firearm by a felon, the authorities said. She could face up to 15 years in prison if convicted of manslaughter.

“The gun was not properly stored,” Sheriff Mina said. “In fact, it was easily accessible even to a 2-year-old, and the result is a tragedy.”

It was unclear exactly how the child was able to get the gun, the authorities said.

The charges came at a time when gun control measures are being proposed at the federal level and across the country in the wake of mass shootings, and as gun safety looms in the minds of Americans worn by violence. The accidental killing of Mr. Mabry also underscores the unintended violence that can result from easy access to guns in America, supporters of gun control say.

Last year, 163 people in the US were unintentionally shot and killed by children, according to data from Everytown for Gun Safety, a gun-control group. So far this year, there have been 46 such deaths, according to the organization.

“This is a uniquely American crisis where children are able to easily access unsecured loaded firearms and hurt themselves or others,” Shannon Watts, the founder of Moms Demand Action, said by phone on Monday.

These types of shootings, she added, are rooted in “negligence by gun owners.”

On May 26, when the authorities in Orlando responded to a report of a shooting at a home on a cul-de-sac, investigators initially believed they were dealing with a death by suicide, the arrest report states.

But then Ms. Ayala told them that it was their toddler who had fired the weapon, Sheriff Mina said. The family had heard the “loud pop,” prompting Ms. Ayala to get up from the bed and find her husband bleeding on the floor, the report states. She disarmed the gun and began chest compressions on Mr. Mabry, according to the report.

Then, as her husband was taken to a hospital, she asked her 5-year-old child how the 2-year-old had managed to “get” the gun, but the child could not explain how he had gotten the gun and replied that his younger sibling had just “shot papi,” the arrest report states.

“She couldn’t explain how the gun fell out of the bag, with a high capacity magazine inserted in it, all while being clipped and zipped,” the report states.

Ms. Ayala later acknowledged to the authorities that “any child in the room could have figured out how to get the gun out of the bag,” the report states.

“Gun owners that do not properly secure their firearms are just one split second away from one of these tragedies happening in their homes,” Sheriff Mina said.

In Congress, gun control proposals are being considered at the urging of President Biden, who has acknowledged the political realities that could make him just another president to fail to get action on guns.

One of the bills before the House of Representatives would impose penalties on people who fail to secure a gun. It would apply only to households where a minor “is likely to gain access” or where a person prohibited from owning a gun lives.

James Alan Fox, professor of criminology at Northeastern University, said that while legislation could help, he doubts it would significantly reduce these types of deaths.

“If a child gets hold of a gun, they’re going to kill themselves or you or another family member,” he said. “And if that isn’t deterrent enough, then whatever the prosecutor does is not going to make a difference.”

During the pandemic, unintentional shooting deaths by increased children because “more kids were at home with unsecured guns,” Ms. Watts said. Everytown for Gun Safety estimates that in 2022, 4.6 million children live in a home with at least one gun that is not securely stored.

Sheriff Mina said the tragedy in Orlando was “100 percent preventable,” and had resulted in three children effectively losing both parents.

“Their father is dead. Their mother is in jail,” he said. “And a young child has to live their life knowing that he shot his father dele.”