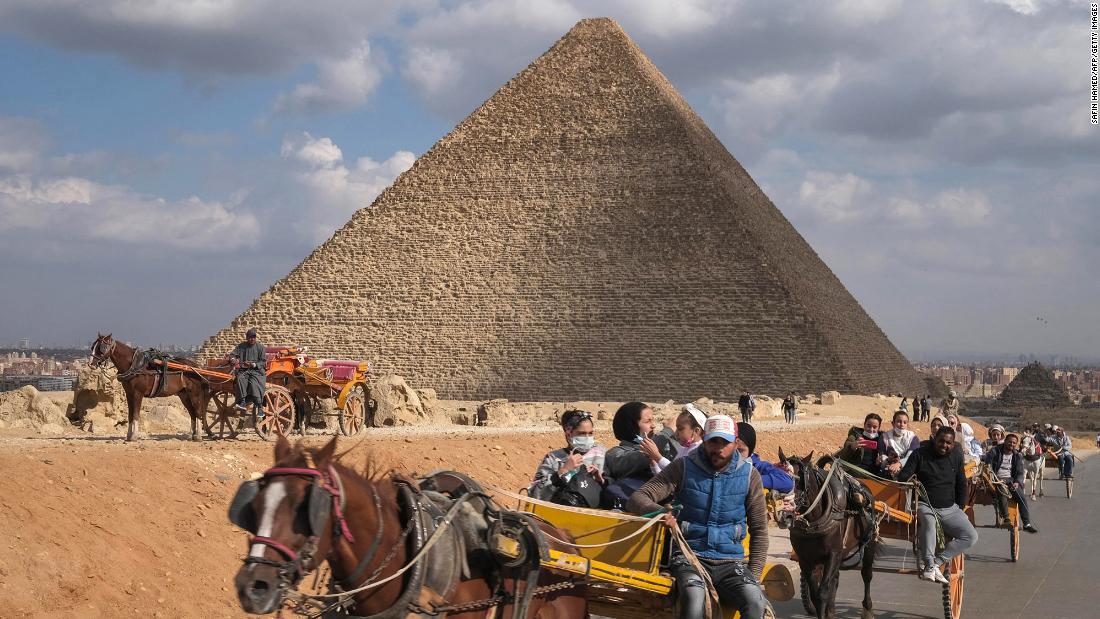 Abu Dhabi, UAE and Antalya, Turkey (CNN) — As Russia’s war rages in Ukraine, its impact on the Middle East is beginning to stretch beyond the food shortages that already had some policymakers worried.
Home to some of the world’s oldest civilizations and glitziest cities, the Middle East is one of its top tourist destinations. Cities like Dubai, Cairo and Istanbul are regularly listed among the top ten global tourism hotspots.
But as the war chaos in energy and food markets as well as rampant inflation across the globe, it is also hitting the tourism industries of some countries more than others. According to Euromonitor International, global inbound tourism will be impacted by $6.9 billion in 2022 due to a collapse of Russian and Ukrainian tourism. Some Middle Eastern nations may face the brunt of it.

Egypt, Turkey and more recently the UAE are three of the most popular destinations for Ukrainian and Russian tourists. The tourism sectors in Egypt and Turkey are already noting the effects, as analysts predict painful losses further down the road.

Before the pandemic, Ukrainian trips to Egypt grew by 49% in 2019 compared to the previous year, according to a 2020 Colliers International report, making the second-largest Ukrainian source market for the North African country after Germany. After Cairo summarized flights in July of 2021 following the easing of Covid-19 related restrictions, Ukrainians were the first tourists to return, said deputy tourism minister Ghada Shalaby.

Egypt’s tourism ministry is now trying to attract visitors from other countries.

“It is a big hit … but we are trying to survive,” Shalaby told CNN, adding that Egypt is finding ways to maintain Russian visitors while launching campaigns aimed at Western Europe and Arab countries for the coming season.

Analysts are however skeptical about Egypt’s ability to sufficiently fill the gap.

“A dramatic replacement of tourists from those two countries is probably unlikely,” said Timothy Kaldas, a policy fellow at the Tahrir Institute of Middle East Policy, adding that a number of pre-Ukraine-war problems have already felt shocks to Egypt’s budget.

“They already have a constellation of challenges that this war is just making worse,” he added.

Turkey was hoping to lift the economy back on its feet this year with a recovering tourism industry but the Ukraine crisis and mounting sanctions on Russia are threatening to tear through the $34.5 billion that were expected this year in tourism revenues.

In the seaside resorts of Antalya on the Turkish Riviera, workers in the tourism sector are worried about the receding numbers.

“Russia is the most important market for us, and Ukraine is also coming in as third or fourth,” said Ulkay Atmaca, president of the Professional Hotel Managers Association in Turkey.

Some are hoping for a resolution to the conflict by the summer season, just in time to salvage the industry, but others are far less optimistic.

“We are expecting a 60% to 65% loss in volume,” Nihal Duruk, Sales and Marketing Manager for Premier Palace Hotel in Antalya, told CNN. “Even if a solution is found as of today, we have lost 50% of our expectations for the coming season of 2022,” she added.

More than 2 million Ukrainian tourists arrived in Turkey in 2021, according to data from the tourism ministry, while another 4.7 million came from Russia.

Bahattin Yucel, a former Turkish economy minister, sees the coming mounting as the economic crisis triggered by Western sanctions on Russia is expected to affect the Turkish citizen.

“Both [the] war and the economic crisis in Russia will affect us,” said Yucel.

Down the eastern end of the Arabian Peninsula, Russia became Dubai’s second-largest source market in 2021, according to data by the Arabian Travel Market (ATM).

After the UAE began granting Russian travelers a free 30-day visa on arrival in 2018, tourist numbers surged. The number of Russians traveling to Dubai and Abu Dhabi grew by more than 60% in the first eight months of that year, reported by the UAE state-owned newspaper The National.

Before the Ukraine war, the ATM forecast the Russian market to surpass $1 billion for the UAE within the next four years. It declined to comment on whether those projections would be impacted by the conflict.

But a war that could spell doom for some Middle Eastern sectors may be a boon for others. Wealthy Russians seeking a financial haven are pouring money into real estate in Turkey and the UAE, Reuters reported. Both Turkey and the United Arab Emirates offer residency incentives for property buyers.

The hotel sectors, however, don’t see a quick recovery.

“No matter how quickly this problem is solved, we will have to suffer the consequences of this crisis for at least three to four years,” said Duruk, the hotelier in Turkey’s Antalia.

A Turkish prosecutor asked a court on Thursday to halt the trial in absentia of 26 Saudi suspects over the killing of journalist Jamal Khashoggi in 2018 at the Saudi consulate in Istanbul and transfer the case to Saudi authorities.

UAE distances itself from anti-Iran discourse after Israel summit

The UAE distanced itself from “discourse of confrontation and polarization” vis-a-vis “our neighbor Iran,” Anwar Gargash, adviser to the UAE president, tweeted Wednesday. He said it was part of an approach to building bridges and promoting stability, of which “Iran is a core part.”

Tunisian President Kais Saied late on Wednesday issued a decree dissolving parliament, which has been suspended since last year, after it defied him by holding an online session and voting to repeal decrees he used to assume near total power. Saied accused MPs of a failed coup and a conspiracy against state security and ordered investigations into them. Saied ruled out early elections on Thursday.

The six-month long Expo 2020 Dubai came to a close on March 31, ending the largest global gathering of ideas, culture and talent since the Covid-19 pandemic. However, its legacy lives on in the 140 startups selected to showcase their work by Expo Live.

Watch CNN’s Becky Anderson speak to some of the innovators involved.

As Expo 2020 Dubai comes to a close, CNN’s Becky Anderson reports on its possible legacy and speaks to some of the innovators involved.

Food inspectors have quietly been sampling their way through the delicacies that some of Dubai’s 20,000 restaurants have to offer.

Unbeknownst to chefs, these are Michelin inspectors, putting together a Michelin Guide for Dubai, the first place in the Middle East to feature in the popular guidebooks that rate establishments on their excellence.

The Michelin Guide currently covers 35 destinations across the world. Dubai will be its latest addition. Inspectors focus on five criteria to rate eateries: quality of the ingredients, mastery of cooking, harmony of flavors, personality of the chef through the cuisine and consistency both over time and across the entire menu.

The announcement to include Dubai was a cause of great celebration for restaurateurs including the founder of The MAINE New England Brasserie, Joey Ghazal, who runs three restaurants in Dubai and one in London.

“The introduction of Michelin into Dubai is going to change the dining landscape,” he says, pointing to increased property rental, an uptick in hotel bookings as well as attraction and retention of better culinary talent.

The Lebanese-Canadian restaurateur says the guide can help establish Dubai as a serious culinary contender. “Look at it through the lens of regional cuisines… Regionally, we have an opportunity to make our food standout, whether it’s Levantine, pan-Arab or Persian.”

The Libyan Antiquities Authority holds a ceremony on March 31 for the repatriation of the artifacts returned by the US Department of Homeland Security, including the marble antiquity of “The Veiled Head of a Lady” and other looted artifacts at the Royal Palace in Tripoli, Libya .

Libyan authorities on Thursday said they received nine ancient artifacts that were returned by the United States after being smuggled out of the North African country, including the marble “Veiled Head of a Lady,” ancient urns and pottery. Libya has a wealth of archaeological treasures and sites, many of which were looted after the 2011 NATO-backed uprising and the chaos that followed.