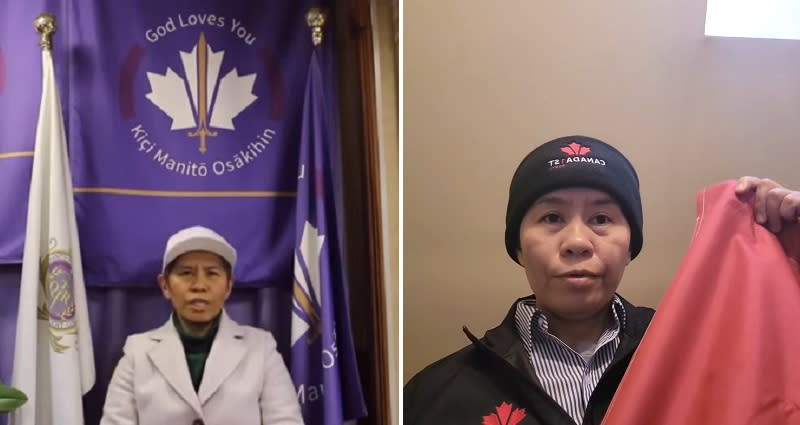 Canadian officials are raising concerns over the rise of a QAnon-linked movement in Canada led by a Filipino immigrant who has dubbed herself the “Queen of Canada.”

Romana Didulo made headlines after leading dozens of her followers to the Peterborough Police Station on Water Street, Ontario City, on Aug. 13where she ordered them to arrest officers at the establishment.

Didulo eventually fled the scene with her closest followers to her RV, leaving those behind to get arrested. She then distanced herself from the protesters and stated she was in Peterborough as “an observer, NOT participant” following the incident.

Peterborough Police arrested six people connected to the incident. The sixth arrest occurred on Aug. 25 when a 67-year-old woman was charged with assaulting a peace officer with a weapon.

The recording of Didulo’s livestream from her RV began circulating on social media. In the video, Didulo claims that she is going to speak to their “allied countries” and ask for help. Soon after, the people inside the RV claim that they see an aircraft – which Didulo describes as a triangular military craft operated – above the police station.

More from NextShark: Watch: Hong Kong residents bid farewell to Jumbo Floating Restaurant as it is towed to secret location

The self-proclaimed “Queen of Canada” was born in the Philippines and lived there until she immigrated to Vancouver on July 25, 1990, at 15 years old, according to the Web site of her political party, Canada 1st.

Her father, Romualdo Didulo Jr., was a lawyer and engineer and died when she was 10 years old. After her mother, Ana Didulo died a year later, she was raised by her eldest aunt, Winnie Freda Didulo Delfin, a school principal.

Didulo, the youngest of two children, allegedly led a privileged life that she described as being the “modern equivalent of the Royal Family.”

Her website also notes that her grandmother played a pivotal role in blocking Imperial Japanese soldiers from invading their regional stronghold by successfully mounting strategic defense and offense during WWII.

Didulo set up an engineering recruiting and consulting firm and a healthcare consultancy in 2007. In 2021, Didulo formed Canada 1st. One of the promises she made under the political party was to end the “enslavement” of Canadians and to withdraw the country from international alliances.

Although Didulo’s party initially received little attention after it was formed, things began to change once she tailored her speeches to align with the narratives pushed by the far-right conspiracy theory movement QAnon in May.

Didulo’s popularity rose after several QAnon influencers “confirmed” her sovereign power in Canada. She now has more than 70,000 followers on the messaging app Telegram.

Didulo has made some controversial claims in the past few months, including one she posted on her Telegram channel in which she claimed that Queen Elizabeth II was executed for crimes against humanity last year.

At the height of the COVID-19 pandemic in Canada, Didulo told her supporters to allegedly issue pseudo-legal “cease-and-desist” letters, demanding businesses and hospitals to stop their health and safety measures against the coronavirus.

At one point in November last year, Didulo ordered the “Kingdom of Canada Military” to “shoot to kill” health workers vaccinating anyone below the age of 19 and told other supporters to get rid of the vaccines or, as she called them, “ bioweapons.”

Didulo said military tribunals would be held for the healthcare workers who would “receive not one, but two bullets on your forehead for each child that you have harmed as a result of injecting this experimental vaccine.”

As the “Queen of Canada,” Didulo also released a series of decrees to her followers that had real-life consequences.

Some of the decrees she released claimed that bill payments were unnecessary, such as “Decree 23,” which stated that water bills were illegal, and “Decree 24,” which said that her followers’ electricity bills in Canada were free.

One of her followers urged others to follow the “royal decrees,” telling them that she had already stopped “paying hydro, weather, natural gas, property taxes, line of credit, and my credit cards.”

Some of her followers reported having their water and electricity cut off after following her orders, while some faced thousands of dollars’ worth of utility bills.

During a speech she gave on April 6, Didulo allegedly claimed I’m a shapeshifter. She also purportedly claimed that “Celestial brothers and sisters visited the kingdom of Canada” the night before the speech.