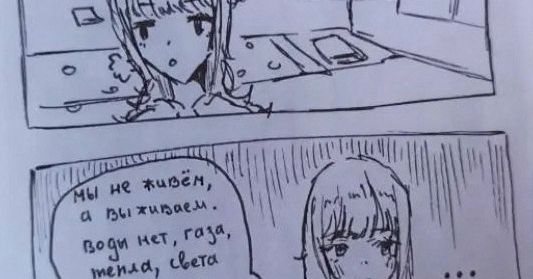 KRAKOW, Poland, April 1 (Reuters) – When a missile hit one of the residential buildings in the besieged city of Mariupol, Ukraine, in early March, 14-year-old Karina Ivashchenko took out a pen and a notebook and started to draw .

Living under bombardment after Russia invaded Ukraine on Feb. 24, Ivashchenko said that drawing and writing not only helped distract her from the war outside her but soon became her coping mechanism.

“I drew my fears. I was afraid of the war. I was afraid when they shot in the streets. We were sitting in the basement, all the walls were shaking,” Ivashchenko told Reuters in an interview.

Together with their neighbours, Ivashchenko and her family took shelter in the basement of their apartment for almost two weeks. They have since escaped to Poland.

Amidst the noise of air raid sirens, approaching planes, and shelling Ivashchenko found refuge through her art.

In her drawings, Ivashchenko portrayed herself as a cartoon character, expressing her feelings, thoughts, and experiences. Some of her illustrations from her tell of the sounds she heard, while others depict scenes of everyday life in Ukraine.

An undated handout picture shows comic illustrations drawn by Karina Ivashchenko, 14, as a way to channel her fear and overcome war trauma, amid Russia’s invasion of the country, in Mariupol, Ukraine obtained by Reuters on March 31, 2022. The story reads: “It seems to me that I have calmed down. I like drawing. We do not live but do survive. There is no water, no gas, no heat, no electricity. I want to live normal life.” Oleg Ivashchenko/Handout via REUTERS

In the time the Ivashchenko family were sheltering in the basement they had no electricity, heating or water supply.

“When I came out of the basement into the street, all the houses were on fire. Black smoke everywhere. All houses, all glass – it was simply gone. It was very scary. I have never seen anything like it. It was hell ,” Ivashchenko said.

Nearly 5,000 people, including about 210 children, have been killed in the southern Ukrainian city of Mariupol since Russian forces laid siege to it, a spokesperson for the mayor said on Monday. Reuters has been unable to verify these figures.

Ivashchenko, her mother, grandmother, and grandfather were among those who managed to escape Mariupol and reach safety in the Polish city of Krakow. Ivashchenko’s father, however, had to stay behind.

For the first time in a while, the feeling of safety has returned and there is “no need to draw anymore,” said Ivashchenko.