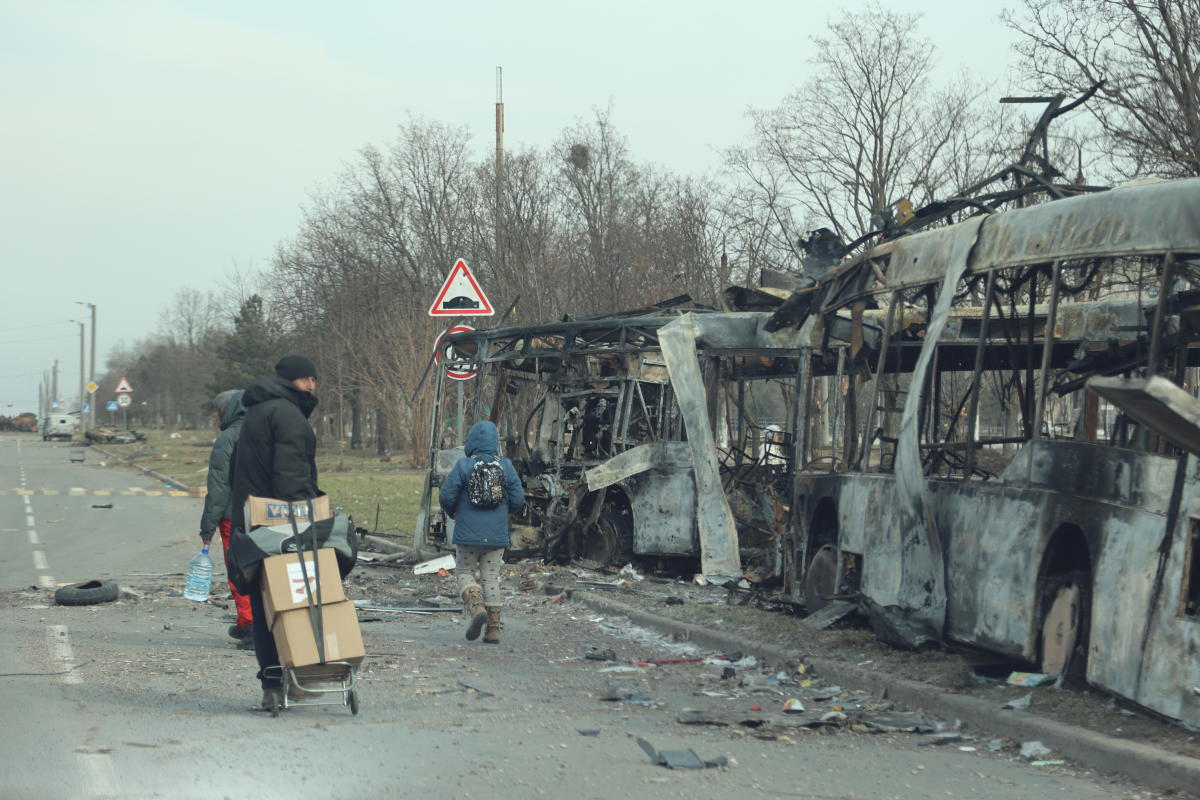 Hopes for the establishment of a humanitarian corridor in and out of the besieged southern Ukrainian city of Mariupol were dashed again Friday the Russian troops continued their military assault.

“We were indeed hoping the safe passage could be provided today,” Diana Santana, spokesperson for the International Committee of the Red Cross (ICRC), told Yahoo News. “Unfortunately, it’s not happening today, but we are still hopeful.”

A team of ICRC workers had been on their way to Mariupol early Friday to try to facilitate the safe passage of civilians and aid, but were forced to return to Zaporizhzhia, a Ukrainian city 140 miles north of Mariupol, after “arrangements and conditions made it impossible to proceed,” according to a press release from the ICRC. The team will try again Saturday.

“For the operation to succeed, it is critical that the parties respect the agreements and provide the necessary conditions and security guarantees,” the release said in part.

“The humanitarian corridor/evacuation did not work,” Toby Fricker, chief of communications for UNICEF South Africa, who is currently in Ukraine, told Yahoo News in an email. “We hope to do what we can. However, to get to Mariupol is a drive through very contested areas, so it’s very challenging.”

To cities outside Mariupol, but nearby, UNICEF reported some success in delivering supplies to those in need.

“Where we do have safe access, we are able to deliver critical supplies,” Joe English, another UNICEF staffer, added. “Just yesterday, UNICEF was among the UN agencies and humanitarian partners that were able to deliver supplies to thousands of people in the encircled city of Sumy, including children and hospital patients, where shelling and fighting have destroyed homes, hospitals and schools, cut off power and water, and prevented commercial deliveries of food and other goods.”

In the past, Russia has blamed Ukraine for the failure to establish a safe corridor, or passageway, out of Mariupol, while Ukrainian officials have repeatedly accused Russian troops of compromising aid missions near the city by blocking humanitarian convoys, often by using deadly force.

Petro Andryushchenko, an aid to the mayor of Mariupol, said Thursday that Russian troops had prevented even entering the smallest amounts of aid from the city.

“The city remains closed to entry and very dangerous to exit with personal transport,” Andryushchenko said on the Telegram messaging app.

Mariupol, a strategic port city that was home to more than 400,000 people just three weeks ago, has been almost completely shut off from the outside world by advancing Russian forces. You have of thousands of Ukrainians are estimated to remain trapped inside Mariupol in “inhumane conditions,” Ukrainian President Volodymyr Zelensky said last week.

“There is nothing left there,” Zelensky said of Mariupol while addressing the Italian Parliament on Tuesday by video. “Only bad.”

Most residents remain confined to bomb shelters and the bases of buildings throughout the city, clinging to the hope that they will eventually be evacuated.

If captured, Mariupol, which was once Ukraine’s 10th largest city, would give Russia strategic control of Ukraine’s southern coast.

As of Friday, more than 4.1 million Ukrainians had fled the country, with the majority — upward of 2.3 million — finding refugee in Poland, according to the UN refugee agency.