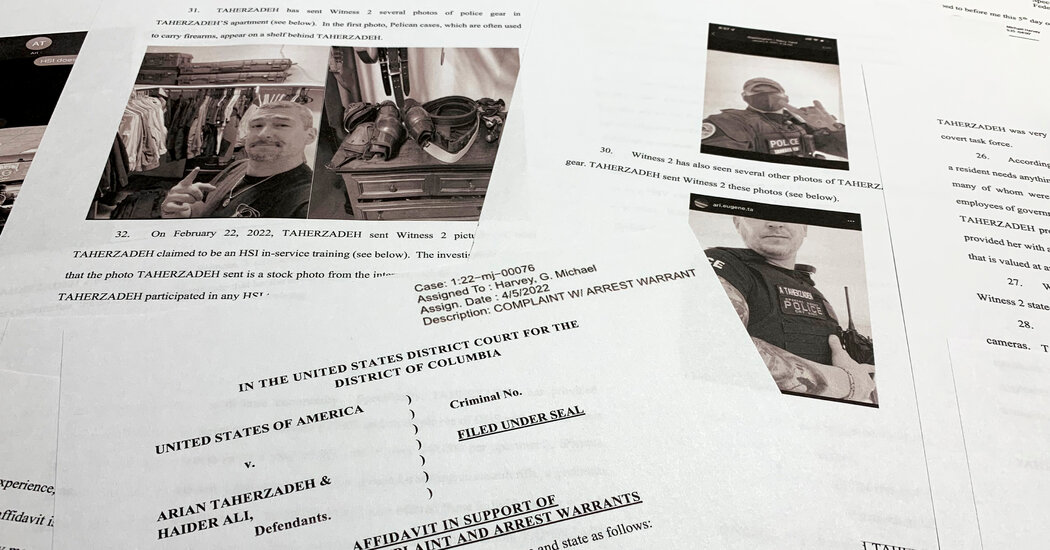 One of two men accused of du masquerading as federal agents in a multiyear scheme has pleaded guilty to federal charges, admitting that he Secret Service agents and others in Washington to secure leases to apartments that he never paid for and promote his bogus security company, the Justice Department said on Monday.

The man, Arian Taherzadeh, 40, of Washington, pleaded guilty on July 20 in US District Court in the District of Columbia to one count of federal conspiracy, one count of unlawful possession of a large-capacity ammunition device and one count of voyeurism, the Justice Department said. The latter charge is related to his unauthorized recording of women having sex in his apartment dele, federal prosecutors said.

The sentencing date has not been set. The Justice Department said that Mr. Taherzadeh has agreed to cooperate with the government’s investigation. He faces up to five years in prison and a $250,000 fine on the conspiracy charge.

The guilty plea came nearly four months after Mr. Taherzadeh and another Washington man, Haider Ali, 35, were charged with impersonating United States officers in a case that appeared to expose shortcomings within the Secret Service, the agency charged with protecting the president and the president’s family. Four members of the agency, which did not immediately respond to an email seeking comment on Monday, have been placed on administrative leave while the case is investigated.

From December 2018 to April 2022, Mr. Taherzadeh “falsely assumed and intended to be officers or employees” of several government agencies, including the Department of Homeland Security, federal prosecutors said.

He recruited people to his security company, United States Special Police, under the guise that it was a “covert federal law enforcement task force,” prosecutors said. He then defrauded three apartment complex owners in Washington by saying he needed their units for supposed operations, prosecutors said.

While the apartments lost more than $800,000 in unpaid rent combined, Mr. Taherzadeh ingratiated himself with at least three Secret Service officers — buying them gifts, such as a drone, a doomsday survival pack and, more luxuriously, several rent-free apartments including a penthouse for a year, prosecutors said. He had also offered to buy a $2,000 assault rifle for an agent assigned to Jill Biden’s protective detail, according to an affidavit.

It is unclear exactly how the men financed their impersonation scheme. Court records state that Mr. Ali had helped fund United States Special Police and other general expenses by paying with large amounts of cash that he carried. But prosecutors did not specify how Mr. Ali had obtained his money from him.

Mr. Ali told witnesses that he had connections to the Inter-Services Intelligence in Pakistan — a claim that the Pakistani Embassy denied and described in April as “totally fallacious.” Mr. Ali also held several visas that had been issued by Pakistan and Iran, prosecutors said.

Mr. Ali had also made other eccentric claims about his background, prosecutors said: That he had participated in the capture of Joaquín Guzmán Loera, the drug lord known as El Chapo; that his family was Middle-Eastern royalty; and that he was a Calvin Klein model.

Mr. Taherzadeh similarly made up his back story to agents, prosecutors said, telling them that he had been an Army Ranger, a special agent with the Department of Homeland Security, a US air marshal and an undercover officer who had once killed someone in a shootout.

When apartment complex workers confronted Mr. Taherzadeh, Mr. Ali and an unidentified person about their failure to pay rent, the men would blame it on issues with a fictitious management at United States Special Police and a slow-moving federal bureaucracy, prosecutors said. In his unpaid apartment from him, Mr. Taherzadeh installed surveillance cameras to record women having sex and kept an unlicensed gun that was fully loaded with large-capacity ammunition, prosecutors said.

In one apartment named The Crossing, Mr. Taherzadeh and Mr. Ali used their personas as law enforcement officials to obtain parking spots for themselves and Secret Service members, prosecutors said.

One apartment, The Sonnet, eventually evicted Mr. Taherzadeh for not paying rent.

The recruitment efforts of Mr. Taherzadeh and Mr. Ali for United States Special Police largely hinged on their portrayal as federal officers, prosecutors said. In one instance, Mr. Taherzadeh instructed to recruit to conduct weapons-handling drills. In another, he showed a separate recruit a fake Homeland Security investigative file labeled “confidential.”

And much of their impersonation scheme, prosecutors said, was rooted in attention to details: They had a machine to create and program “personal identification verification” cards; a black SUV with police lights in it; scores of guns; law enforcement tactical gear; clothing with police badges; the fingerprinting kit; and equipment used to breach doors. The authorities also found about 30 hard drives, hard drive copying equipment and other surveillance gear.

The investigation into Mr. Taherzadeh and Mr. Ali began after a letter carrier with the United States Postal Service was assaulted in March at an apartment complex where the men had been living. The US postal inspector went to the complex to interview witnesses, including the two men.

The men told the inspector that they were investigators with the US Special Police Investigation Unit, according to the affidavit. They said they were part of an undercover investigation into gang-related activity as well as an inquiry into the Jan. 6, 2021, attack on the US Capitol.

The inspector reported the information to the Homeland Security Office of the Inspector General, which referred the case to the FBI