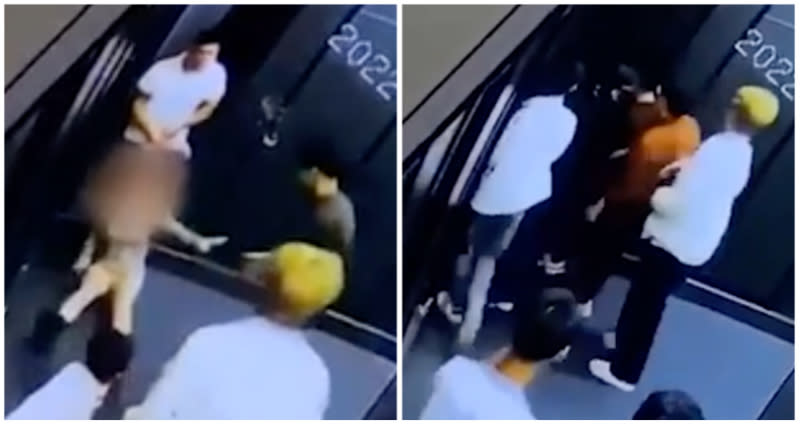 A man who was captured on surveillance camera forcibly dragging a woman into a toilet stall at a bar in Henan province, China, has been arrested.

The 27-year-old man, surnamed Li, was recorded trying to restrain a woman and prevent her from leaving a stall at a bathroom at the Max Club in Zhongmu County on July 16.

As seen in the video, the woman manages to escape his grasp; however, Li grabs her hair dela and tries to drag her back in dela as she grabs onto another man outside the stall. They are both pulled to the ground as Li forces her into the stall and slams the door.

Another woman dressed in a black shirt tries to kick the door open before a group of men join her, allowing the victim to escape.

More from NextShark: Elderly Asian woman shoved to the ground in unprovoked attack in Oakland Chinatown

Police took the man and the victim into custody after the incident. However, they reportedly let them leave after learning they were in a relationship.

After the surveillance footage of the incident went viral on social media in China, police began investigating the incident.

Li was reportedly arrested and is being held on suspicion of indecent assault for attempting to urinate in front of the woman.

More from NextShark: Man killed, 3 others injured by police over stolen Pokémon cards and pizza in Florida

The incident has sparked outrage on social media, reigniting discussions and concerns over violence against women in China. Netizens have criticized the assailant, stating he should not have been excused for her behavior even if they were in a relationship. The men who witnessed the attack were also criticized for not acting sooner.

Gender-based violence in China has been in the public spotlight since a video of women diners being brutally attacked by men in Tangshan went viral last month. Another video of a man ambushing his ex-wife and daughter in China on July 6 also went viral. Netizens have been calling for more action toward gender equality and harsher sentences for assailants.

Jeremy Lin treats himself to pizza after recovering from COVID-19