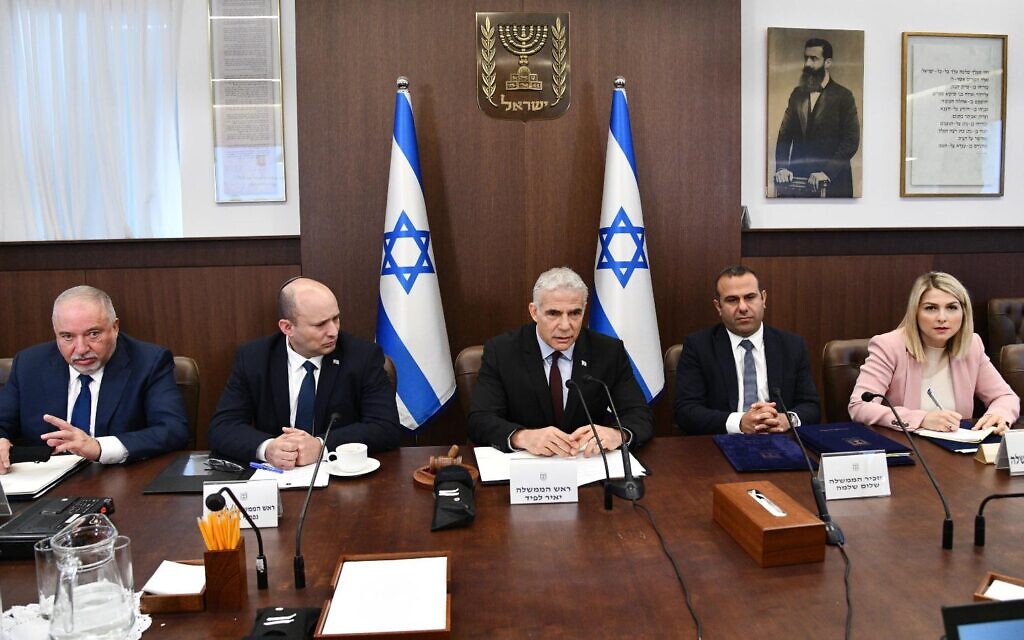 Yair Lapid, leading his first cabinet meeting as prime minister on Sunday, told ministers that he expected them to prioritize stability in the coming months, despite feeling the pull of campaigning as the country hurtles toward its fifth election in under four years.

“Our goal – that of this entire [cabinet] table – in the coming will be to govern the months if elections were not being held. The citizens of Israel are entitled to a continuously functioning government. This is what I expect from my fellow ministers,” he said.

Lapid’s remarks came just three days into his prime ministerial tenure, after trading seats with now-Alternate Prime Minister Naftali Bennet as part of a power-sharing agreement that was triggered when Israel’s 24th Knesset voted to disband itself on Thursday morning, forcing fresh elections.

The prime minister, who is leading a caretaker government until a new one is sworn in after the November 1 election, listed hospital budget holdups, an ongoing educational system workforce dispute, and security threats among the issues that will have to be addressed during his tenure .

“The education crisis cannot wait. Funding for hospitals cannot be postponed. The Iranians, Hamas and Hezbollah will not wait. We need to counter them persistently in every arena, and this is exactly what we are doing,” Lapid said.

The Hezbollah terror group in Lebanon appeared to pose the most immediate threat, after Israel on Saturday shot down three Lebanese UAVs that crossed into its economic waters en route to surveil the Karish natural gas field. Lebanon disputes its maritime border with Israel, and American-mediated negotiations are ongoing to resolve the issue. 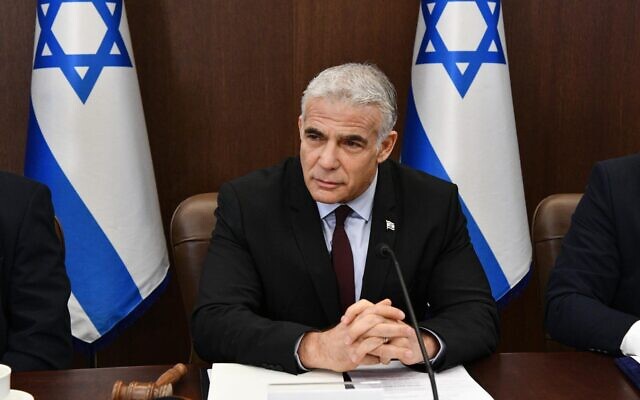 “Hezbollah is continuing on the path of terrorism and is hurting Lebanon’s ability to reach an agreement on a maritime border,” Lapid said, adding that “Israel will continue to defend itself, its citizens and its assets.”

Lapid, a former TV anchor, was notably inexperienced in defense matters when he entered politics about a decade ago. The last prime minister with a paltry military career, Kadima’s Ehud Olmert, was similarly tested by Hezbollah shortly after taking office in 2006. A deadly July 12 cross-border kidnapping raid by the terror group quickly snowballed into the Second Lebanon War.

Although Bennett formally left the Prime Minister’s Office, he still retains control over Iran policy, but his position in the new cabinet is not yet clear. A cabinet shakeup has yet to be announced, though some reshuffling may occur. 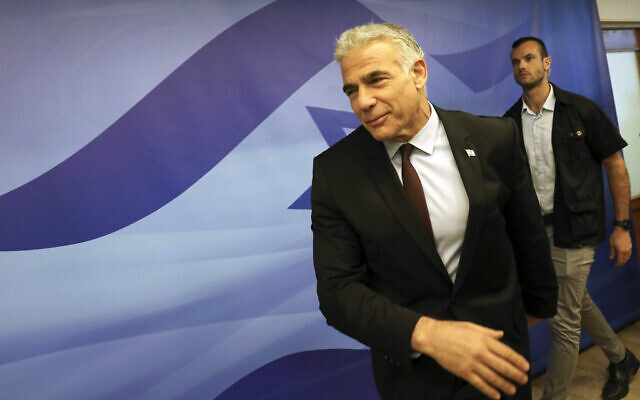 Lapid was set to hold a series of one-on-one meetings with cabinet ministers, starting with Defense Minister Benny Gantz and Health Minister Nitzan Horowitz on Sunday.

Since the first signs of an impending coalition collapsed in mid-June, Gantz has tried to move up the timeline to appoint a new chief of staff for the Israel Defense Forces. The current one, Lt. Gen. Aviv Kohavi, is slated to end his four-year term in January 2023.

There is an open legal debate as to whether Gantz, now that the Knesset disbanded and the government is in caretaker status, can appoint a new chief of staff or if he must make an effort to encourage Kohavi to extend his tenure in the role.