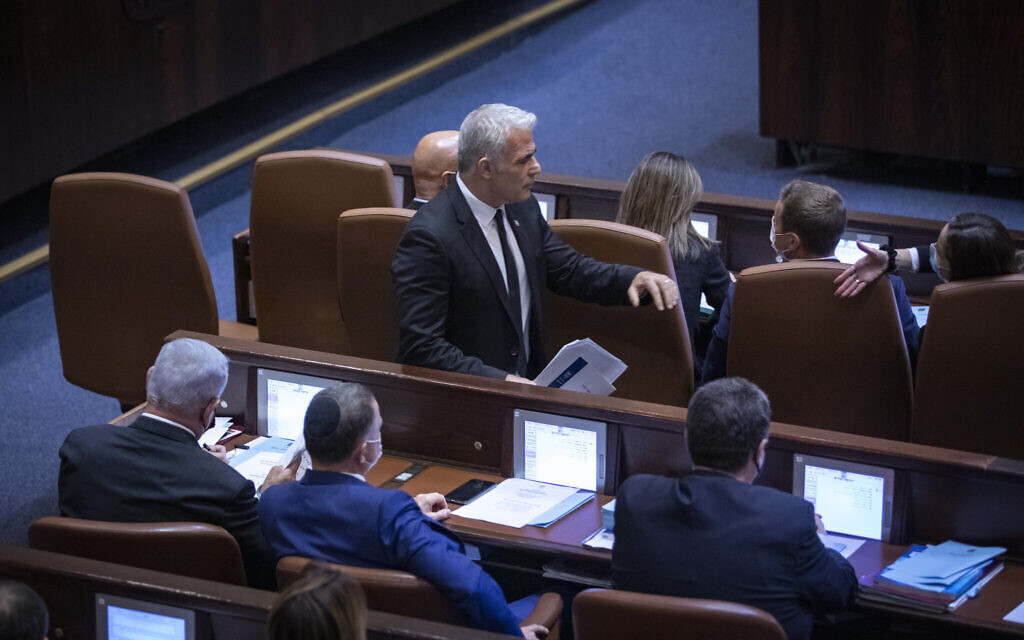 Prime Minister Yair Lapid formally invited opposition chief Benjamin Netanyahu on Sunday to a routine security briefing, as the two continued to quarrel about the issue.

“In accordance with Knesset Law, I would like to invite you as soon as possible to a status update meeting on the national affairs on the agenda,” Lapid wrote in a letter to Netanyahu dated July 3.

The letter came two days after Lapid invited Netanyahu to a security briefing alongside the prime minister’s military secretary, Avi Gil, during a phone call with the opposition leader.

Lapid’s spokesperson said Friday that the premier invited Netanyahu to “come, as is accepted, for a security briefing in [Lapid’s] office with the military secretary.” But according to Netanyahu’s spokesperson, the opposition head responded that he wanted to get the legally mandated security updates from Lapid’s military secretary, but without Lapid being present, “in order to prevent the security briefing from turning into a political tool ahead of elections.”

Netanyahu’s apparent concern is not to be seen, and possibly photographed, being briefed by the prime minister he is seeking to defeat in the November 1 elections, Israel’s fifth national vote since 2019, following the collapse of the eight-party coalition led by Yamina leader Naphtali Bennett.

Bennett now serves as alternate prime minister, a role previously held by Lapid as part of their power-sharing agreement.

While the opposition leader is required by law to receive security updates from the prime minister, Netanyahu refused to comply with the procedure over the past year, as he properly defended against Bennett’s premier.

Instead, he received updates from Bennett’s military secretary, also Avi Gil, managing to avoid being photographed while receiving a briefing from his political rival.

Netanyahu’s Friday call to Lapid was the first publicly disclosed conversation between the two since the latter took over as PM hours earlier, tasked with stewarding the country through the elections and until the establishment of a new government.

A spokesperson for the Likud leader said Netanyahu told Lapid he wished him “four months of security quiet,” ahead of the November 1 elections. Netanyahu, who was PM from 2009 to 2021, is attempting to return to power after a year of leading the opposition.

Lapid officially became prime minister at midnight between Thursday and Friday, taking office as the 14th premier in Israel’s history.

Lapid’s statements after the conversation described Netanyahu’s call as congratulatory, though such language was not used according to his rival.

In Lapid’s first speech as premier on Saturday evening, he thanked his predecessor Bennett for the “orderly transition of power” and praised his leadership over the past 12 months.

“I want to start by thanking the 13th Prime Minister of the State of Israel, Naftali Bennett. For your decency, for your friendship and for leading the government this past year to economic and security achievements not seen here for years,” he said, adding “a special thank you for allowing the citizens of Israel to see this week an orderly transition between people who keep agreements and believe in one another.”

It was a jab at Netanyahu, who broke a 2020 power rotation agreement with Defense Minister Benny Gantz and who last year only held a brief, 30-minute transition meeting with incoming prime minister Bennett.