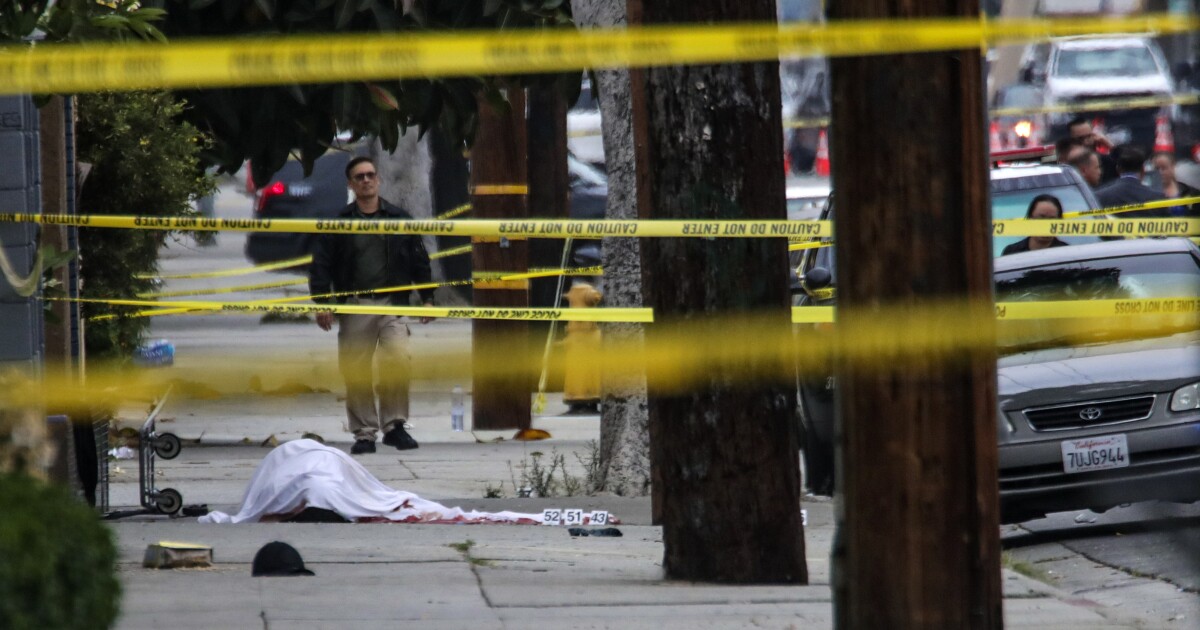 The man who shot and killed two El Monte police officers Tuesday could have faced significantly more time in prison when he was last charged with a crime. But one of Dist. Atty. George Gascón’s most heavily criticized policies probably resulted in a lower sentence, according to documents reviewed by The Times.

Justin Flores, 35, who also died in Tuesday’s confrontation, was charged with being a felon in possession of a firearm and methamphetamine when he was arrested by Los Angeles County sheriff’s deputies in 2020.

Flores had been convicted of burglary in 2011. Burglaries are strike offenses, which make suspects charged with later crimes eligible for harsher sentences. Flores’ earlier conviction means he had one strike against him when he was charged in 2020.

But the prosecutor assigned to the case, Deputy Dist. Atty. Larry Holcomb, said he had to revoke the strike allegation after Gascón took office, according to a disposition report reviewed by The Times. That’s because the new DA had issued a “special directive” that barred prosecutors from filing strike allegations on his first day in office.

Flores pleaded no contest to being a felon in possession of a firearm in 2021, and prosecutors agreed to drop all other charges, records show.

Though the gun conviction alone could have sent him to prison for up to three years, by pleading no contest, Flores was instead sentenced to two years’ probation and 20 days in jail.

There is no guarantee Flores would have still been in jail Tuesday, when he shot and killed El Monte Police Cpl. Michael Paredes and Officer Joseph Santana as they responded to a reported stabbing at the Siesta Inn.

But the removal of the strike allegation certainly cost prosecutors leverage when negotiating a plea, according to criminal experts.

“If you are going to implement a blanket policy, you are always in danger of having a Willie Horton moment,” she said, “where that decision applied to one case results in a horrible outcome.”

Horton was convicted of first-degree murder in Massachusetts and sentenced to life in prison without parole. He escaped while on a weekend furlough program in 1986, then brutally raped a woman and assaulted her boyfriend.

The Horton case was used in an infamous attack ad against then-Massachusetts Gov. Michael Dukakis, who was running for president in 1988 against George HW Bush.

Gascón has moved away from such blanket policies in recent months. Prosecutors can now request approval from a committee to either try juveniles as adults or pursue special allegations in murder cases, tactics Gascón had initially outlawed when he took office.

At least two such cases are now being reviewed by committees.

Though some have said Gascón backpedaled due to external criticism and the growing threat of a recall, he has insisted he began considering exceptions to some of his policies months ago.

Dmitry Gorin, a former deputy district attorney and defense lawyer, said “the dismissal of a prior strike offense by the DA’s office against a gang member with a criminal record charged with drug sales, and possession of loaded gun, is unusual. The typical pre-Gascón offer would be in the range of 32 months in state prison.”

Two law enforcement sources also told The Times that the disposition report, which confirmed that prosecutors revoked the strike against Flores, was placed on “lockdown” Wednesday. Anyone who wanted to review the document had to seek the permission of high-ranking district attorney’s office staff, according to the sources, who spoke on condition of anonymity for fear of retaliation.

In an e-mail to The Times, district attorney’s office spokesman Ricardo Santiago said “experienced managers” had reviewed the case and determined the offer given to Flores was consistent with those offered by previous administrations. Santiago also said the prosecutors assigned to the case could have challenged Gascón’s policy if they believed Flores’ case was extraordinary.

“The sentencing directive is presumptive. We empower DDAs to rebut that presumption if they believe extraordinary circumstances exist,” Santiago wrote. “Special Directive 20-08 states that ‘if the charged offense is probation eligible, probation shall be the presumptive offer absent extraordinary circumstances warranting a prison commitment.’ No such request was made in this case.”

But Deputy Dist. Atty. Martin Bean, who supervised the case and signed off in a disposition, said in an email to The Times that “Special Directive 20-08, which was issued at the moment the District Attorney was sworn in, all strike priors to be required dismissed. No exceptions were permitted by the directive.”

Santiago also confirmed the disposition report was placed on lockdown, a necessary precaution taken as the office has faced “an unprecedented number of leaks” the prosecutors have staged an open revolt against Gascón.

“Not only is this conduct unethical, in many cases it is illegal,” Santiago said of the leaks.

“We have an ethical and legal obligation to prevent leaks when possible. In high-profile cases we do this as a precautionary measure, and the fact that an unknown person attempted to review confidential information and received that message speaks to the necessity of the procedure.”

Disposition reports are not public documents.

Flores’ prior strike stemmed from a 2011 break-in at his grandparents’ home. He stole a television and was high at the time, according to a different law enforcement source, who said most of Flores’ criminal record consisted of nonviolent misdemeanors driven by his drug addiction issues. That source spoke on condition of anonymity because they were not authorized to speak to the press.

Flores’ criminal history has been a repeated source of scrutiny this week. The LA County Probation Department has also come under criticism after The Times reported that Flores’ girlfriend accused him of assault last week.

That allegation should have triggered a probation violation and resulted in Flores, but Flores was never arrested by probation officers, previously told The Times. A Probation Department spokeswoman said the matter was under investigation, and she declined to comment further.

Paredes and Santana were responding to a report of a stabbing Tuesday night and got into a shootout with Flores.

Both men were wounded so badly that officers shot them in police cruisers to a hospital, where they died a short time later.

Three officers opened fire in the gun battle, and Flores was pronounced dead at the scene.