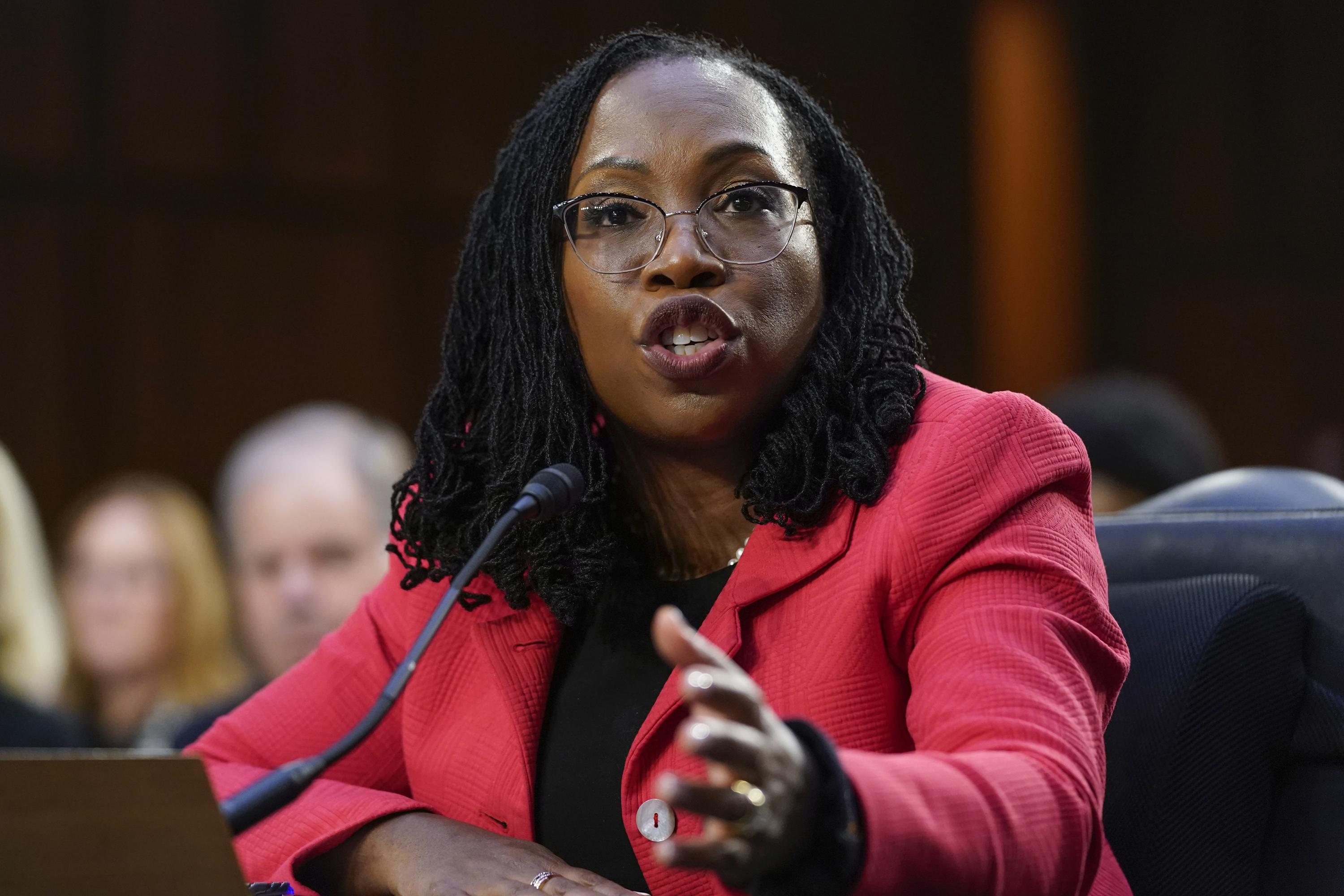 WASHINGTON (AP) — Supreme Court nominee Ketanji Brown Jackson forcefully defended her record as a judge Tuesday, pushing back against Republican assertions that she was soft on crime and declaring she would rule as an “independent jurist” if confirmed as the first Black woman on the high court.

In a marathon hearing stretching into the night, Republicans aggressively questioned Jackson on the sentences she has handed down to sex offenders in her nine years as a federal judge, her advocacy on behalf of terror suspects at Guantanamo Bay, her thoughts on critical race theory and even her religious views. At one point, Sen. Ted Cruz of Texas read from children’s books that he said are taught at her teenage daughter’s school.

Several GOP senators grilled her on her child pornography sentences, arguing they were lighter than federal guidelines recommend. She said she based the sentences on many factors, not just the guidelines, and said some of the cases had given her nightmares.

Could her rulings have endangered children? “As a mother and a judge,” she said, “nothing could be further from the truth.”

In what Judiciary Committee Chairman Dick Durbin, D-Ill., described as “a trial by ordeal,” Jackson attempted to answer GOP concerns and also highlight the empathetic style on the bench that she has frequently described. The committee’s Republicans, several of whom have their eyes on the presidency, tried to brand her — and Democrats in general — as soft on crime, an emerging theme in GOP midterm election campaigns.

Jackson told the committee that her brother and two uncles served as police officers, and that “crime and the effect on the community, and the need for law enforcement — those are not abstract concepts or political slogans to me.”

Tuesday’s hearing was the first of two days of questioning after Jackson and the 22 members of the panel gave opening statements on Monday. On Thursday, the committee will hear from legal experts before an eventual vote to move her nomination to the Senate floor.

President Joe Biden chose Jackson in February, fulfilling a campaign pledge to nominate a Black woman to the Supreme Court for the first time in American history. She would take the seat of Justice Stephen Breyer, who announced in January that he would retire after 28 years on the court. Jackson would be the third Black justice, after Thurgood Marshall and Clarence Thomas, and the sixth woman.

Barring unexpected developments, Democrats who control the Senate by the slimmest of margins hope to wrap up Jackson’s confirmation before Easter, though Breyer is not leaving until the current session ends this summer.

She said the potential to be the first Black woman on the court is “extremely meaningful” and that she had received many letters from young girls. Jackson, who grew up in Miami, noted that she had not had to attend racially segregated public schools as her own parents did, “and the fact that we had come that far was to me a testament to the hope and the promise of this country .”

Responding to Republicans who have questioned whether she is too liberal in her judicial philosophy, Jackson said she tries to “understand what the people who created this law intended.” She said she relies on the words of statutes but also looks to history and practice when the meaning may not be clear.

Democrats have been full of praise for Biden’s Supreme Court nominee, noting that she would not only be the first Black woman but also the first public defender on the court, and first with experience representing indigent criminal defendants since Justice Marshall.

Republicans praised that experience, too, but also questioned it, focusing in particular on work she did roughly 15 years ago representing Guantanamo Bay detainees. Jackson said public defenders don’t pick their clients and are “standing up for the constitutional value of representation.” She said she continued to represent one client in private practice because her firm happened to be assigned her case.

Picking up on a started thread by Missouri Sen. Josh Hawley and amplified by the Republican National Committee in fundraising emails, Cruz questioned Jackson on her sentences for child pornographers, at one point bringing out a large poster board and circling sentences he said he found egregious.

Jackson defended her decisions by saying she takes into account not only sentencing guidelines but also the stories of the victims, the nature of the offenses and the defendants’ histories.

“A judge is not playing a numbers game,” she said. “A judge is looking at all of these different factors.”

The White House has rejected the criticism as “toxic and weakly presented misinformation.” And sentencing expert Douglas Berman, an Ohio State law professor, wrote on his blog that while Jackson’s record shows she is skeptical of the range of prison terms recommended for child pornography cases, “so too were prosecutors in the majority of her cases and so too are district judges nationwide.”

Cruz, Hawley and Arkansas Sen. Tom Cotton are potential 2024 presidential candidates, and their rounds of questioning were some of the most combative, hitting on issues that are popular with the GOP base. Cruz asked her about critical race theory, a premise that centers on the idea that racism is systemic in the nation’s institutions. Jackson said the idea does not come up in her work as a judge, and it “would n’t be something I would rely on” if confirmed.

The Texas senator also questioned her about her daughter’s private school in Washington, where she sits on the board, bringing up a book called “Antiracist Baby” he said was taught to younger children at the school.

“Do you agree with this book that is being taught for kids that babies are racist?” Cross asked.

Visibly annoyed, Jackson took a long pause. She said no children should be made to feel they are racists, victims or oppressors. “I don’t believe in any of that,” she said.

Cotton asked whether there should be more police or fewer, a question she declined to answer, and questioned her on drug sentencing.

Jackson also bristled at questions from South Carolina Sen. Lindsey Graham, who voted for her confirmation her an appeals court judge last year but has openly expressed her frustration after President Joe Biden picked her over a South Carolina judge. Graham asked her about her dela religion, and how often she goes to church, angrily noting what he said was unfair criticism of Justice Amy Coney Barrett’s Catholicism ahead of her 2020 confirmation.

Jackson — who thanked God in her opening statement and said that faith “sustains me at this moment” — responded that she is a Protestant. But she said she is reluctant to talk about her faith in her in detail because “I want to be mindful of the need for the public to have confidence in my ability to separate out my personal views.”

Asked about abortion, Jackson readily agreed with comments that conservative Justices Barrett and Brett Kavanaugh made when they were up for confirmation. “Roe and Casey are the settled law of the Supreme Court concerning the right to terminate a woman’s pregnancy. They have established a framework that the court has reaffirmed,” Jackson said.

Jackson’s answers bypassed a key point: The court right now is weighing whether to overrule those cases that affirm a nationwide right to abortion.

The White House said Tuesday that Biden had watched part of the hearings and was proud of Jackson’s “grace and dignity.”