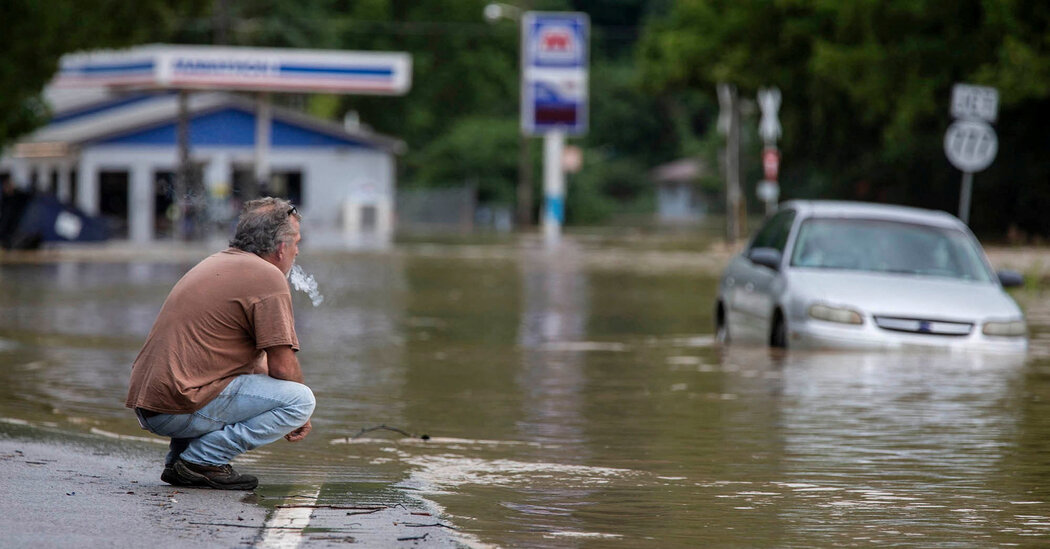 Floods can arise all year round, in every region of the world. But discerning the relationship between any given flood and climate change is no small feat, experts say, made difficult by limited historical records, particularly for the most extreme floods, which occur infrequently.

It can be tempting to attribute all floods and other extreme events to the forces of warming planet. But weather is not climate, even though weather can be affected by climate. For example, scientists are confident that climate change makes unusually hot days more common. They’re not as sure that climate change is making tornadoes more severe.

Floods fall somewhere along the confidence spectrum between heat waves (“yes, clearly”) and tornadoes (“we don’t know yet”), said Daniel Swain, a climate scientist at the University of California, Los Angeles. “I’d say, ‘yes, probably, but…’”

Flooding, like other disasters, involves a number of competing factors that may affect its frequency and intensity in opposing ways. Climate change, which is worsening extreme rainfall in many storms, is an increasingly important part of the mix.

Several main ingredients contribute to flood development: precipitation, snowmelt, topography and how wet the soil is. Depending on the type of the flood, some factors may matter more than others.

Flooding can also happen in areas with no nearby bodies of water. Flash floods, in particular, can develop anywhere that experiences intense rainfall over a short period of time.

How floods are measured

Many metrics are used to measure floods, including stage height (the height of the water in a river relative to a specific point) and flow rate (how much water passes by a specific location over a particular time period).

To describe the severity of a flood, though, experts will often use the more simple term “a 100-year flood,” to describe a flood that has a 1 percent chance of striking in any given year, considered an extreme and rare occurrence. The term is just a description of likelihood, though, not a promise. A region can have two 100-year floods within a few years.

Have floods increased in past decades?

Not exactly. Climate change has undoubtedly intensified heavy precipitation events, but, unexpectedly, there has been no corresponding increase in flood events.

When it comes to river floods, climate change is likely to exacerbate the frequency and intensity of the extreme flood events, but decreasing the number of moderate floods, researchers found in a 2021 study published in Nature.

As the climate warms, higher rates of evaporation cause soils to dry out more rapidly. For those moderate and more commonplace floods, the initial conditions of soil moisture is important, since drier soils may be able to absorb most of the rainfall.

With larger flood events, that initial soil moisture matters less “because there’s so much water that the soil wouldn’t be able to absorb all of it, anyway,” said Manuela Brunner, a hydrologist at the University of Freiburg in Germany and the lead author of the 2021 study. Any additional water added past the point where the soil is fully saturated will run off and contribute to flood development, Dr. Brunner said.

Looking to the future

Scientists are confident some types of flooding will increase in the “business as usual” scenario where humans continue warming the planet with greenhouse gas emissions at the current rate.

First, coastal flooding will continue to increase the sea levels rise. Melting glaciers and ice sheets add volume to the ocean, and the water itself expands as it warms.

Second, flash flooding will continue to increase as there are more extreme precipitation events. Warmer temperatures increase evaporation, putting more moisture into the atmosphere that then gets released as rain or snowfall.

Researchers also expect that, as the climate warms, flash floods will get “flashier,” meaning that the timing of the floods will get shorter while the magnitude gets higher. Flashier floods can be more dangerous and destructive.

Flash floods may also increasingly follow catastrophic wildfires in a deadly cascade of climate disasters. That’s because wildfires destroy forests and other vegetation, which in turn weakens the soil and makes it less permeable.

If heavy rains occur on land damaged by a fire, the water “does not get absorbed by the land surface as effectively as it once did,” said Andrew Hoell, a meteorologist at the National Oceanic and Atmospheric Administration’s Physical Sciences Lab.

Though it may be counterintuitive to see the two extremes, too much fire and too much water, in the same region, the sight will most likely become more common, particularly in the American West.

In a recent paper published in Nature, researchers found that in the future, flash floods may be more common father north, in Northern Rockies and Northern Plains states.

This poses a risk for flood mitigation efforts, local governments may not be aware of the future flash flood risk, said Zhi Li, lead author of the 2022 study.

The pattern is driven by more rapidly melting snow, and snow that melts earlier in the year, Dr. I read. Regions at higher latitudes may experience more “rain-on-snow” floods like those that surged through Yellowstone in June.