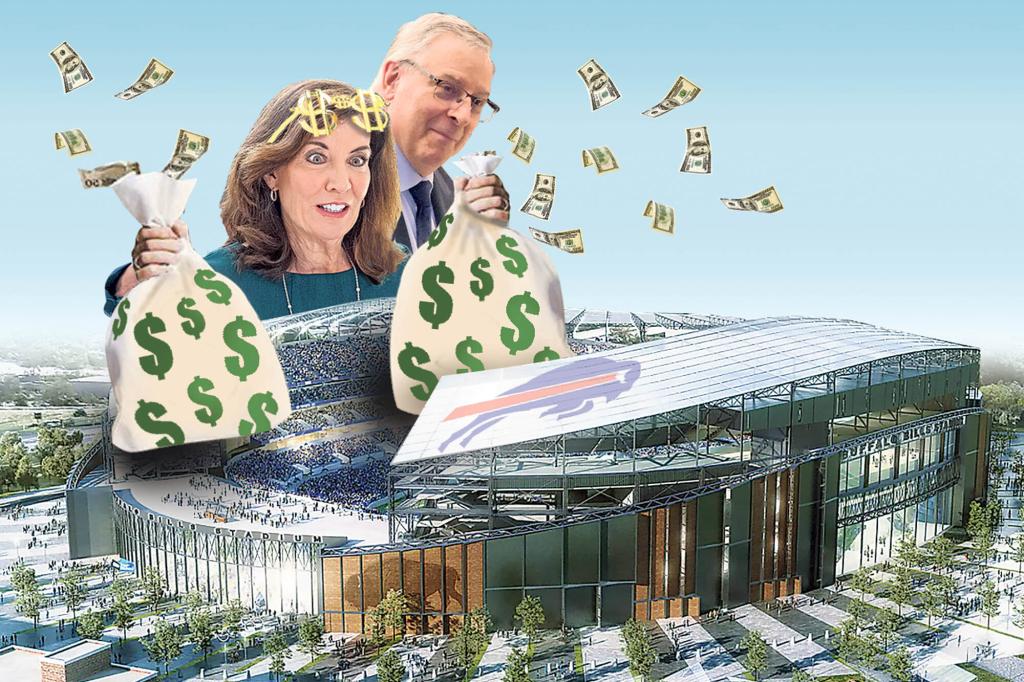 This week, Gov. Hochul announced the eye-popping sweetener from taxpayers, which will amount to the most public money ever spent on building a US stadium. The New York State Assembly will consider in the next few weeks whether to approve the $600 million from the state as part of the 2022 budget. Erie County is providing the other $250 million.

Meanwhile, insiders point out that New York is taking on the massive tab despite the fact that in November, the city of St. Louis won a $790 million settlement in a suit against the NFL and Rams owner Stan Kroenke for moving the franchise to Los Angeles without first engaging in “good-faith” negotiations to stay put.

A year after the NFL granted Kroenke the right to move the Rams to Los Angeles, officials for St. Louis, St. Louis County and the government entity that owns the stadium sued the NFL and Kroenke, citing league relocation guidelines it claimed suitable require “to work diligently and in good faith to obtain and maintain teams stadium facilities in their home territories.”

Cities including Oakland, Calif. in the past have sued the NFL for moving teams over antitrust issues but not the NFL’s own relocation policy.

The windfall for St. Louis — which had sued for $1 billion in 2017 and whose case had been slated to go to trial in January — has sparked an intense debate on whether Kroenke should foot the entire bill himself or other NFL team owners should also pony up. NFL Commissioner Roger Goodell has created an ad-hoc committee of owners to hash it out.

Whoever ends up paying, it’s clear that the NFL wouldn’t be enthusiastic about another such case, notes Mark Rosentraub, a sports management professor at the University of Michigan who has done extensive research on public funding for sports facilities.

“That settlement told me the NFL didn’t want to go to court,” Rosentraub said. “That is evidence if Buffalo put forth a real proposal it would be hard for the Bills to move since we know you can challenge the NFL. It is not a hypothetical.”

In particular, NFL teams — the Buffalo Bills included — face the awkward fact that they are effectively granted monopolies by local governments in their respective markets. In exchange, it can become complicated for a franchise to pick up and move to another market, Rosentraub said.

“We disagree with this flawed legal analysis, and the conclusion that Buffalo should be more like St. Louis — a city with no football team,” a spokesperson for Gov. Hochul told The Post in a statement.

Privately, sources close to the situation say Hochul’s team never spoke to the St. Louis legal team to inform their negotiations with the Bills’ billionaire owner Terry Pegula. Hochul’s team claimed it was aware of the Kroenke case, but felt that it was a different situation because Kroenke allegedly misrepresented his intentions from him to St. Louis, according to the sources.

Nevertheless, Gov. Hochul’s largesse to the Bills has baffled bystanders including Michael Agguire, a California-based attorney who on Jan. 25 sued the NFL and the Los Angeles Chargers in San Diego Superior Court for moving the team in 2017 to LA from San Diego.

“It is kind of surprising if Governor Hochul didn’t reach out to the St. Louis lawyers and speak about her options,” Agguire told The Post. “The St. Louis result basically means cities now have a Magna Carta that protects them from unreasonable demands from the NFL monopoly. St. Louis opened up a whole new corridor of cases.”

Responding to the suggestion that the Bills would have a hard time moving, Pegula Sports Entertainment spokesman told The Post: “Relocation could have been a very real possibility if the governor had not worked so hard to get everyone to the table.”

The governor’s spokesperson added that “The Buffalo Bills franchise is a proven economic driver for the Buffalo region and the state,” noting that it generates $27 million annually in direct income, sales and use taxes for New York State, Erie County and Buffalo.

The governor’s office predicts that those revenues will total $1.6 billion over a 30-year lease period and bring more than $385 million to the Buffalo area each year.