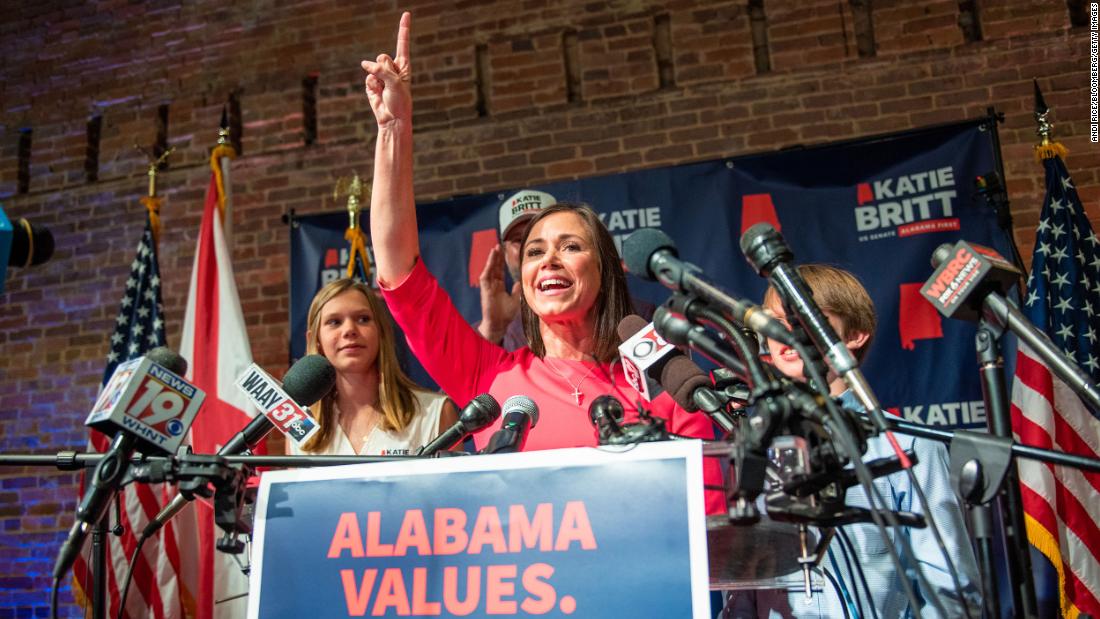 Alabama is one of several states across the South to hold elections Tuesday. Primaries in Virginia and runoff elections in Georgia will determine the general election matchups for a handful of the nation’s most competitive congressional races in November’s midterm elections. And Democrats in Washington, DC, will decide whether to nominate the city mayor for a third term.

Britt, a former chief of staff to Shelby who went on to lead the Business Council of Alabama, and Brooks, a six-term congressman and member of the hard-line House Freedom Caucus, finished in the top two of the state’s May primary to advance to the runoff, with Britt taking 45% to Brooks’ 29%.
Trump had initially supported Brooks in the Senate race but rescinded that endorsement in March, citing the congressman’s remarks in an August 2021 rally with Trump that Republicans needed to move past the 2020 election — an implicit break from Trump’s widespread voter fraud.
Less than two weeks before the runoff, Trump endorsed Britt, saying in a statement that Brooks “foolishly started listening to the wrong consultants and not to the people.” The decision, however, disappointed many of the former President’s top supporters.

Brooks has argued enough that he has a long history of supporting Trump’s policies, and Tuesday’s runoff will reveal if that will be enough to insulate him against the former President’s criticism.

Republican Glenn Youngkin’s victory in Virginia’s governor’s race last year offered an early glimpse into just how much the political tide had turned against the Democrats heading into the midterm elections.
This year, the GOP is attempting to build on its gains in three races for Democratic-held House seats: Rep. Elaine Luria’s Virginia Beach-based 2nd District, as well as Rep. Abigail Spanberger’s 7th District and Rep. Jennifer Wexton’s 10th District, both in northern Virginia.

The state GOP allows Republican officials in each congressional district to decide how to choose their nominees. The 2nd and 7th Districts will hold primaries Tuesday, while the 10th District GOP chose retired Navy Capt. Hung Cao as its nominee in a ranked-choice, firehouse primary in May.

In the 2nd District, Navy veteran and state Sen. Jen Kiggans has establishment support from the Congressional Leadership Fund, which is aligned with House GOP leader Kevin McCarthy, and from New York Rep. Elise Stefanik’s leadership PAC, as well as the campaign arm of the National Rifle Association. Navy veteran Jarome Bell is backed by far-right figures and groups, including former Trump national security adviser Michael Flynn, Arizona Rep. Paul Gosar and Turning Point Action, the group affiliated with activist Charlie Kirk. In a tweet last year, Bell called for the execution of those involved with 2020 election fraud, even though there is no evidence of widespread fraud. Air Force veteran Tommy Altman is backed by North Carolina Rep. Madison Cawthorn, a member of the House Freedom Caucus who lost his primary earlier this year.
In the 7th District, the GOP race is wide open, with a field that includes state Sen. Bryce Reeves and Yesli Vega, a Prince William County supervisor and an auxiliary sheriff’s deputy who is supported by Texas Sen. Ted Cruz and Virginia “Ginni” Thomas, the conservative activist and wife of US Supreme Court Justice Clarence Thomas.

Trump’s biggest failure in a Republican primary to date came in Georgia, where candidates he supported failed to oust Gov. Brian Kemp and Secretary of State Brad Raffensperger, whom Trump had been targeting for more than a year.

He gets another chance to gauge his influence on Georgia races Tuesday in runoffs for two House seats.

In the Atlanta-area 6th District, Jake Evans, the Trump-endorsed former chairman of the State Ethics Commission, faces Marine veteran and emergency room doctor Rich McCormick, who is making his second bid for Congress. In the 10th District, which stretches east from Atlanta to the South Carolina border, the GOP runoff features Trump’s pick, former Democratic state Rep. Vernon Jones, against businessman Mike Collins, who is the son of the late US Rep. Mac Collins and recently earned Kemp’s endorsement. Jones originally ran for governor, before switching to the House race with Trump’s encouragement.

Will the Stacey Abrams slate succeed in Georgia Democratic runoffs?

An endorsement from Stacey Abrams is one of the most sought-after in Democratic politics across the country and especially in Georgia, where she’ll square off in November with Kemp for a second time.

Abrams has endorsed in three primary runoffs for statewide Democratic offices Tuesday as she seeks to help shape the party’s ticket this fall.

State Rep. Bee Nguyen, the daughter of Vietnamese immigrants, is Abrams’ pick for secretary of state over former state Rep. Dee Dawkins-Haigler, who is Black and has said she believes support for Nguyen is the result of party leaders’ efforts to diversify the Democratic ticket and appeal to more White voters in November. Dawkins-Haigler has the support of the three candidates who failed to make the runoff. The winner will take on Republican incumbent Brad Raffensperger and Libertarian Ted Metz, a former gubernatorial candidate, in November.
In the lieutenant governor race, Abrams is backing lawyer Charlie Bailey. He is running against Kwanza Hall, who briefly served as a US congressman after winning the special election in 2020 to replace the late Rep. John Lewis. The nominee will face Republican state Sen. Burt Jones, who has been endorsed by Trump.

National Republicans have rallied around Jeremy Hunt, a 28-year-old graduate of the US Military Academy at West Point and a Black candidate in Georgia’s plurality Black and rural 2nd District, in the race to take on longtime Democratic Rep. Sanford Bishop.

Hunt, who finished first in the May primary with 37% of the vote, faces Chris West, a 38-year-old attorney and former Georgia Air National Guard officer who is White. West is supported by some of the Republicans they faced in the primary. He has cast Hunt, a Fox commentator who recently moved to Columbus while taking Yale Law School classes online, as an outsider to the district.

Former South Carolina Gov. Nikki Haley has campaigned with Hunt, and the National Republican Congressional Committee listed him as an “On the Radar” candidate on its program for promising recruits. He is among a number of Black Republican candidates — which also includes Wesley Hunt in Texas, John James in Michigan and Jennifer-Ruth Green in Indiana — attempting to win seats and diversify the party’s congressional membership this year.

Bishop has represented the Southwest Georgia district since 1993. Its large Black population and Bishop’s status as a more conservative “Blue Dog” Democrat have made it one of the only rural Southern seats the party still holds. Bishop’t hasn’t faced a truly competitive general election since 2010.

But Georgia’s redistricting process made the seat slightly more competitive, and Republicans hope that with economic and historical factors at their back, the election wave would carry them to victory in the district where former Democratic President Jimmy Carter resides.

Bowser and Robert White are widely seen as the top contenders in the race. White has pledged to expand the district’s government and guarantee a job to anyone who wants one. But with little public polling, it’s not clear that DC residents are eager to deny Bowser’s bid to become the first mayor to win three consecutive terms since Marion Barry in 1986. (Barry served four nonconsecutive terms in all.)