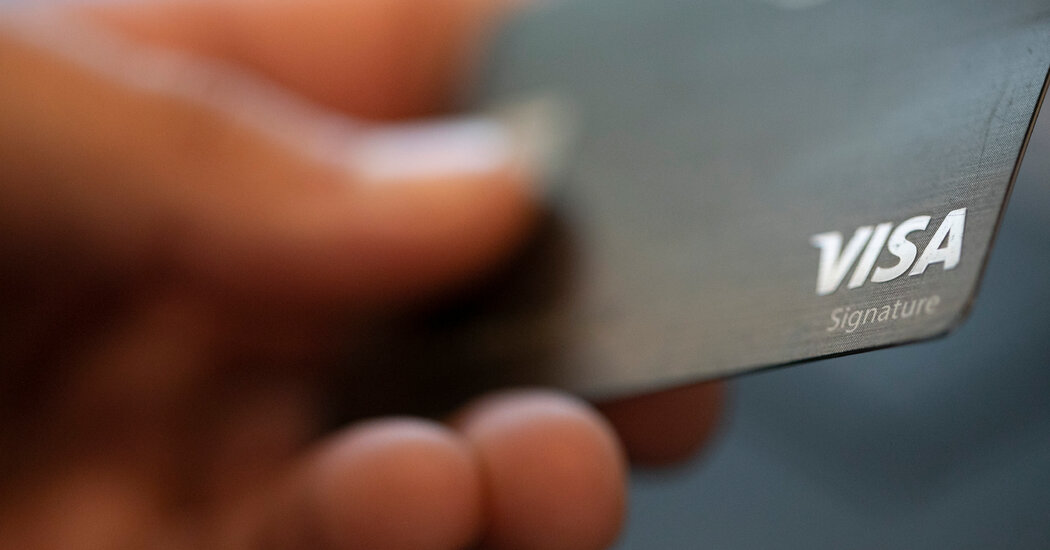 The decision’s unusually strong language raises alarms for payment processors. This early-stage win signals that companies may not be able to easily distance themselves from accusations of misdeeds by their clients.

Aims to argue that the case could upend finance. In its motion to dismiss, Visa said that a decision against the company would upend the financial and payment industries, making it impossible for Visa to do its job processing transactions for millions of law-abiding businesses and consumers. A company spokesman told DealBook in a statement that it condemns “sex trafficking, sexual exploitation, and child sexual abuse materials as repugnant to our values ​​and purpose as a company.” The Visa spokesman said the company does not tolerate the use of its network for illegal activity and continues to believe it is an improper defendant, calling the ruling “disappointing,” and saying it “mischaracterizes Visa’s role.”

The judge, though, wrote that Visa’s argument was “reminiscent of the ‘too big to fail’ refrain from the financial industry in the 2008 financial crisis,” and said asking Visa to not let its services be used to facilitate illegal activity was not a tall order.

Lina Khan, the FTC chair, overruled her staff to sue Meta, Bloomberg Law reports. The agency filed an injunction last week to block the company’s takeover of the maker of the virtual reality fitness app Within. The move by Khan reflects her more aggressive approach to competition law and Big Tech.

More than 70 current and former Deutsche Bank employees are under investigation in a tax scheme. An internal inquiry at the bank reportedly found that its staff broke rules to help clients evade taxes. Deutsche Bank shared the results of its investigation, which it launched in 2015, with prosecutors, the Financial Times reported.

House Speaker Nancy Pelosi begins a tour of Asia that may include a stop in Taiwan. China has increasingly issued sharp warnings in recent days that a visit to the self-governing island would provoke a response, perhaps a military one. The Biden administration did not try to stop Pelosi, concluding that the potential risks of trying to halt the visit were greater than the risk of allowing Pelosi to proceed.

Late Friday evening, Disney filed an antitrust lawsuit against Visa and Mastercard that is an offshoot of a 2005 lawsuit against the credit card companies over interchange fees, which they charge merchants for every transaction and pay to the bank that issued the card. Many companies that rely heavily on credit card purchases, like retailers, argue that the card companies’ hold on the market allows them to effectively price-fix those fees. And they say the end result is higher prices for customers.

The litigation stems from a roughly $6 billion settlement in 2012. The initial settlement included an agreement by Visa and Mastercard to reduce the charge to process transactions for eight months. But lawmakers, including Senator J. Durbin of Illinois, argued that the concessions the credit card companies offered were insufficient. Certain large retailers, like Walmart, opted out of the settlement, hoping to get better terms themselves, as Amazon did earlier this year. That means the lawsuit could be Disney’s way of pushing for money, better terms with the credit card companies or both.

Disney claims that Visa and Mastercard used corporate maneuvering to shroud their hold on the industry. When Visa and Mastercard were private companies, they were backed by thousands of financial institutions, including such big banks as JPMorgan Chase, that were recipients of interchange fees. When the payment processors went public, in 2006 and 2008, it created a perception of separation between them and the banks, which some analysts said was aimed at mitigating regulatory scrutiny. “If it’s a single company, they hoped they would not be viewed as a cartel of banks,” Harry First, a law professor specializing in antitrust at NYU, told DealBook. “A single company can set its own price and do what it wants.” (The strategy is similar to one that the NFL used unsuccessfully in arguments before the Supreme Court years ago.)

While the corporate structure changed, Disney argues in the suit, the credit card companies’ behavior did not. Disney says that the beneficial fees that Visa and Mastercard offered the banks remain, and that the two companies dominate the industry, driving up costs. “The debit card market is dominated by Visa and Mastercard,” the suit notes. “Combined, Visa and Mastercard comprised about 75 percent of all debit purchase volume in 2004 and comprise over 80 percent today.” Fees continue to be a focus of legislative action, as well. Senator Durbin and a colleague plan to propose a new bill to target them.

“We do not expect in the near litigating this and a resolution could be announced near term,” a spokesman for Mastercard told DealBook. Visa declined to comment on the record.

“It is surprising to me on some level that we saw all that arises from buying activity and we weren’t collectively able to see that it was going to end at some point.”

— JD Daunt, chief commercial officer at Liquidity Services, on the boom times for liquidators retailers rush to get rid of goods that were in high demand just a year ago.

The initial public offering is one of the business world’s most fabled and fraught transactions. In “Going Public,” which was published last week, Dakin Campbell, Insider’s chief finance correspondent, details how the venture capitalist Bill Gurley led an effort in 2019 to make fairer IPOs (in his opinion) for start-ups and average investors. The effort challenged big banks’ control over the process, giving rise to different sorts of transactions, including direct listings and special purpose acquisition companies.

Three years later, some of the companies that went public in these non-traditional ways have seen their shares fall, causing big losses for investors. Other deals have been outright frauds. DealBook spoke with Campbell about this Silicon Valley-inspired IPO “revolution” and its aftermath.

Who benefited from the changes to IPOs pushed by Silicon Valley power brokers that you describe in the book?

Is this good for the economy?

Over the last 20-plus years there has been a dramatic reduction in the number of companies listed on US stock exchanges. It’s fallen by half, according to some figures. If companies have more options to access the public markets, they will be more inclined to do so. And that would be a good thing for the state of corporate innovation, the larger economy and citizens who invest in public stocks to build wealth.

But many of these deals didn’t build wealth. SPACs have been some the market’s biggest losers.

I’m sure many individual investors unfortunately did lose money. Institutional investors did as well. Broadly, that’s not a story about the process, in my view, as much as it’s a story about the business cycle. Fraud is a different matter entirely. The SEC has taken a firm hand in regulating the SPAC market and I think we can agree that’s a good thing.

best of the rest

We’d like your feedback! Please email thoughts and suggestions to dealbook@nytimes.com.