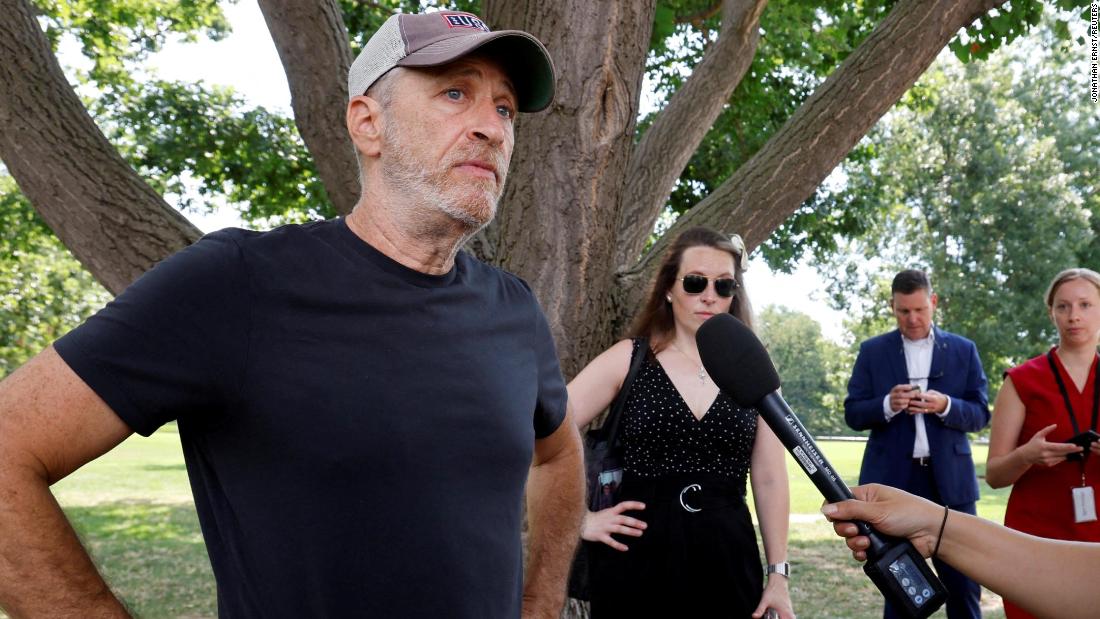 “And if this is America First, then America is f**ked,” he said.

Stewart, speaking with CNN’s Jake Tapper on “The Lead,” said later of lawmakers, “I’m used to lies. I’m used to hypocrisy. I’m used to their cowardice. I’m not used to the cruelty, the casual cruelty … a bill they had fought for, for more than a decade.”

Senate Minority Leader Mitch McConnell, Stewart said earlier during the news conference, lied to veterans by saying “we’ll get it done” and then voting against the bill. Stewart also criticized Pennsylvania Sen. Pat Toomey, a Republican retiring at the end of his term.

“Pat Toomey didn’t lose his job. He’s walking away,” Stewart said. “He God knows what kind of pot of gold he’s stepping into to lobby this government to shit on more people. I’m used to all of it, but I’m not used to the cruelty.”

Stewart apologized for his foul language, but then outlined what the senators were voting against, with a veteran saying the bill “gives them health care, gives them benefits, lets them live from become an addict, keeps veterans from committing suicide.”

“What just makes the gut punch that much more devastating is that these people all came down here so that they could finally tell the men and –” Stewart said off camera ahead of the news conference, pausing mid-sentence and tearing up. “Their constituents are dying. And they’re gonna get it done after recess? You don’t — tell their cancer to take a recess, tell their cancer to stay home and go visit their families.”

Stewart told Tapper of a veteran who “attempted to take his own life based on his desperation with this system and this process of being denied care.”

“And these guys, they act like, ‘Oh, don’t worry. Maybe we’ll get to it now, maybe we’ll get to it in the lame duck session.’ Some of these folks won’t be around,” Stewart continued. “They live scan to scan. So they can intend to be on Senate time, but these other folks are on human time. And that time is precious.”

The goal, Stewart said, is for congressional lawmakers to stay on Capitol Hill until the bill has passed.

Toomey declined to comment on Stewart’s earlier criticism, saying, “That’s not worth responding to.” He denied the “absurd” that objections to the bill were spurred by Democrats reaching a separate deal on a reconciliation bill.

When asked for a response to Stewart’s comments, a spokesperson for McConnell pointed to his floor remarks from Thursday morning. McConnell said he supports the “substance of the bill” but added “even on legislation this major and this costly, the Democratic Leader tried to block the Senate from any semblance of a fair amendment process.”

“This is total bullshit,” Democratic Sen. Kristen Gillibrand of New York said. “This is the worst form of overt politicization I’ve literally ever seen. This is total BS. We have the votes.”

Gillibrand she will ask for second consent says Thursday if she can get floor time, “and as many times as I need to get this back on the floor

“We had strong bipartisan support for this bill. And at the 11th hour, Senator Toomey decides that he wants to rewrite the bill,” she said. “How he convinced 25 of his colleagues to change their vote, I have no idea. What the hell? How does this happen? How do you change your mind right when you’re about to make a law that’s gonna save lives? It makes no sense. It’s an outrage and there has to be accountability.”

Susan Zeier, the mother-in-law of the late Sgt. 1st Class Heath Robinson, for whom the bill is named, called out Republican senators who voted against the bill Wednesday night.

“Sen. Rob Portman was Heath’s senator,” Zeier said. “They voted against my family. They voted for all of us to suffer.”

“They don’t give a shit about veterans. And like someone said before, every single one has pictures with veterans on their Facebook pages on their website, was through that they don’t support veterans. If you voted against this bill, you do not support veterans,” she said. “I’m done. And the next time I come back here, it better be to sign the damn bill at the White House.”

A spokesperson for Portman told CNN the Ohio Republican plans to vote for final passage of the bill, just as he did during the original vote in June, but that he voted against the procedural motion on Wednesday as a way of registering his displeasure at the way Democratic leadership had handled the amendment process.

Pelosi said the move by Republicans to abruptly change course last night is “very hard to explain. It has an immorality to it that 80% of the Republicans would say no.”

“We all share the dismay and all of this,” Pelosi said. “We are not going to stop until we get the job done. I don’t know what we can do to convince the Republicans to do the right thing.”

The legislation had been negotiated between Senate Veterans Affairs Chairman Jon Tester, a Montana Democrat, and the top Republican on the committee, Sen. Jerry Moran of Kansas. Following the failed vote, GOP Sen. John Cornyn of Texas said that Republicans supported the bill, but there was an agreement for two amendment votes, and that Senate Majority Leader Chuck Schumer “reneged on that,” prompting the revolt on the floor.

“The leadership of the Democratic Party double crossed Senator Tester, Senator Moran, made an agreement that there would be two amendments, Senator Schumer agreed to the same thing. And then they reneged on that,” Cornyn said.

Cornyn said Republicans hope to lower the mandatory spending in the final package, now that the bill is in limbo.

“This bill will ultimately pass, but it will be more fiscally responsible,” he said.

“My view was that this needs to pass. I want it to pass. I want to do everything I can to see that it passes sooner than later. And I was willing to wait to try to correct the problems that I see with the legislation,” Moran said earlier on Thursday. “And not all of my colleagues agree with that strategy.”

Stewart rejected Republican assurances that the bill will eventually be approved.

This story has been updated with additional developments Thursday.

CORRECTION: This story has been updated to reflect the correct spelling of Susan Zeier.