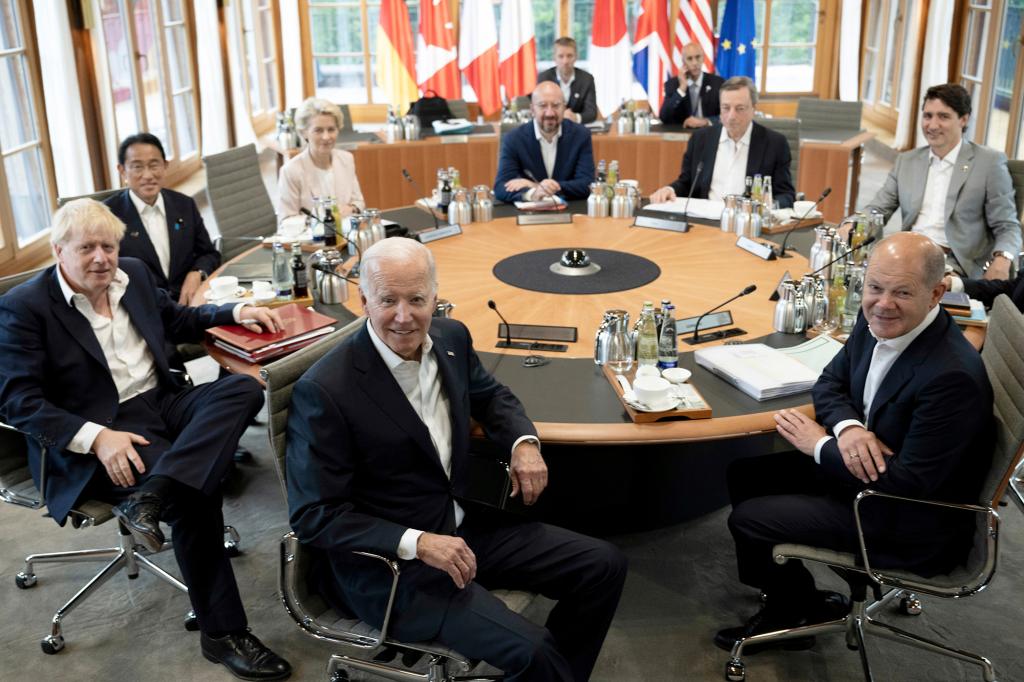 This week’s G-7 meeting in Germany brings to mind the apocryphal Mark Twain quip that “history doesn’t repeat itself — but it rhymes.” Or swap out if you like Santayana’s familiar (and authentic) axiom: “Those who cannot remember the past are condemned to repeat it.”

This G-7 has to be judged the worst G-7 meeting since the one in Japan in 1979 that also took place amidst a global energy crisis and rising inflation. The other factor these two summits, 43 years apart, have in common: an out-to-lunch American president.

Both the 1979 meeting and this week’s meeting attempted to create an oil buyer’s cartel to limit oil imports but with opposite targets in mind. In 1979, the G-7 wanted to limit imports from the Middle East (the attempt failed immediately). Today the G-7 wants to limit imports from Russia (through the indirect means of a “price cap” that amounts to the same thing as a quota) while begging the Middle East, and especially the dominant producer Saudi Arabia, to increase oil exports to the West.

As in 1979, when the other G-7 leaders were harsh toward Jimmy Carter at the summit, this week France’s Emmanuel Macron tried gently to talk sense into Joe Biden, who seems to be trying to emulate all of Carter’s policy mistakes. On the eve of President Biden’s trip to Saudi Arabia to grovel for more oil production, Macron advised Biden that the Saudis and other top Persian Gulf producers are close to current maximum capacity and as such aren’t able to bail out Biden even if they wanted to.

National Security Adviser Jake Sullivan intervened to spare Biden what was about to become a public embarrassment, since the subtext of Macron’s advice was that the United States needs to get its act together, starting with looking to our own oil resources for relief.

France, it should be noted, is serious about energy, unlike its neighbor Germany, which faces the real risk of running out of natural gas next winter. Unlike Biden, France’s government doesn’t make demagogic attacks on its giant oil companies and recently announced its intention to build a new generation of nuclear power plants.

While Biden is no doubt sincere in his wish that the G-7 unite tougher sanctions and boycotts of Russian energy, he appears oblivious to the fact that Europe is looking for a face-saving way to ease existing sanctions that threatens behind to harm their own more than Russia’s economies.

Another parallel between Biden’s position and the dismal Carter years: Saudi Arabia has good reason to be deeply unhappy with the United States both times. In 1979, Saudi Arabia was enraged that the United States sat back — even encouraged — the fall of the shah in Iran, thus handing over Iran to radical Islamists who had destabilized the Middle East ever since.

The Saudis resent Biden calling them moral monsters one day and coming begging for more oil at a lower price the next day, while reopening the futile negotiations with Iran that will have only one outcome — a nuclear-armed Iran.

The Saudis always set their oil policy with Saudi self-interest in mind and will do so again now, though they may enjoy the spectacle of another foolish American president bowing and scraping before them. They might even long for the good old days of Jimmy Carter, as sometimes it seems to be Biden’s project to make Carter look good by comparison.

Steven F. Hayward is a resident scholar at the Institute of Governmental Studies at UC Berkeley and author of a new biography, “M. Stanton Evans: Conservative Wit, Apostle of Freedom.”