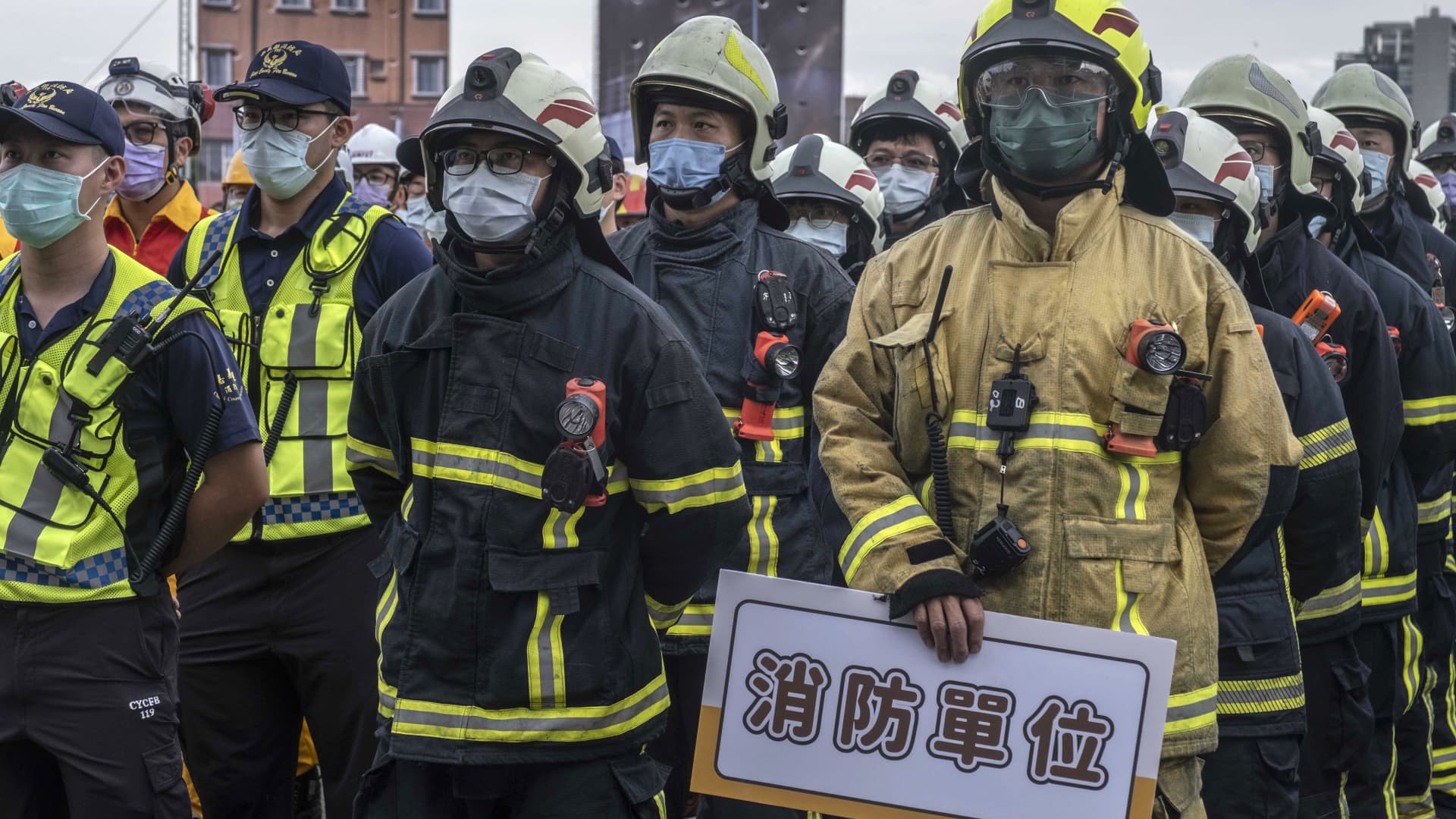 The Ukraine war and increasing Chinese aggression in the region have raised the stakes for Japan as a close neighbor to Taiwan. Taiwanese rescue workers here take part in an exercise simulating a missile attack by the Chinese People’s Liberation Army in Chiayi, Taiwan, on Thursday.

Japan is looking to step up its military capability and boost its defense spending under the leadership of Prime Minister Fumio Kishida.

After spending 75 years with its arms tied behind its back by a pacifist constitution, the rebirth of Japan’s Self Defense Force as a serious deterrent is prompted by the Ukraine war and growing Chinese aggression toward Taiwan — a self-governing island close which China claims as its own.

“I am determined to fundamentally reinforce Japan’s defense capabilities within the next five years and secure the substantial increase of Japan’s defense budget needed to effect it,” Kishida said at the Shangri-La Dialogue in Singapore last week.

Japan “will not rule out any options, including so-called ‘counterstrike capabilities,’ and will realistically consider what is necessary to protect the lives and livelihoods of our people,” the prime minister told the security summit, where defense ministers and top military officials from the US, China, Southeast Asia and Europe gathered.

The threat of China is brought close to home because of Taiwan’s proximity to Japan, a key aide to Kishida told CNBC on the sidelines of the Shangri-La security summit last week.

Taiwan is only about 67 miles away from the Japanese island of Yonaguni Jima, which is about the distance between London and Dover, said Koichiro Matsumoto, deputy cabinet secretary in the Japanese prime minister’s office.

“Since we are so close to Taiwan, the security of the Taiwan Strait is our concern as well,” Matsumoto said, adding that there is growing military disparity between China and Taiwan.

“We have to bear in mind that the overall military balance between China and Taiwan is tilting … in favor of the Chinese mainland PRC, and the gap seems to be growing year by year,” he said, referring to the People Republic of China by its acronym.

China’s Ministry of Foreign Affairs did not respond to CNBC’s request for comment.

Japan’s defense modernization is an example of how China’s behavior is causing the region to change in ways that are not necessarily in Beijing’s interest.

Reiterating Kishida’s pledge that Japan would strengthen its defense capabilities in the next five years, Matsumoto declined to say if defense spending would amount to 2% of Japan’s GDP as local media have reported.

Japan is already a member of the Quad, which includes Australia, India and the US — a strategic grouping considered by some as a counter to China’s growing influence.

Post-war Japan enjoys a high level of trust across the region and provides significant assistance to it, said senior advisor and Japan chair at the Center for Strategic and International Studies, Christopher Johnstone.

“Japan’s defense modernization is an example of how China’s behavior is causing the region to change in ways that are not necessarily in Beijing’s interest,” Johnstone told CNBC emailed response.

Under Article 9 of Japan’s post-war constitution, the country pledged to “forever renounce war” after it was defeated in World War Two. As such, its defense force is not allowed to wage war except to defend the country.

Japan’s pacifism was forged by the deep scar of the first and only nuclear bombing in the world, when the US dropped two atomic bombs on Hiroshima and Nagasaki in 1945.

It was formalized under a constitution written by the victors of WWII. But the Ukraine war and growing Chinese assertiveness have caused serious uneasiness in Japan.

The Japanese people have also been steadily moving away from pacifism in the aftermath of the Ukraine war, according to public opinion surveys and observers.

North Korea has reportedly fired long-range ballistic missiles over Japan and is suspected to be preparing to test its seventh nuclear device.

The Japanese government would be “irresponsible” if it didn’t seek to counter the rise in regional military threats from the two countries, he added.

The pariah state has conducted 31 missile tests so far this year and six nuclear tests since 2006, said research institute Wilson Center, citing the US ambassador to the United Nations Linda Thomas Greenfield.

Its last nuclear test was carried out in 2017.

Russia’s invasion of Ukraine has raised the specter of World War Two in Asia, according to a senior fellow for Asia-Pacific studies at the New York-based Council on Foreign Relations Sheila A. Smith.

“The increasing activities of the [People’s Liberation Army] testing Taiwan’s defenses were already worrisome, but Ukraine’s plight has shocked the Japanese people,” Smith said, referring to the , China’s military.

Japan has disputes with China over the Senkaku island chain in the East China Sea. The islands, which have been administered by Japan for over a century were first claimed by China in the 1970s as the Diaoyu. Tensions over the competing claims have escalated since 2012.

“Ukraine today may be East Asia tomorrow,” the Japanese prime minister said at the Shangri-La Dialogue.