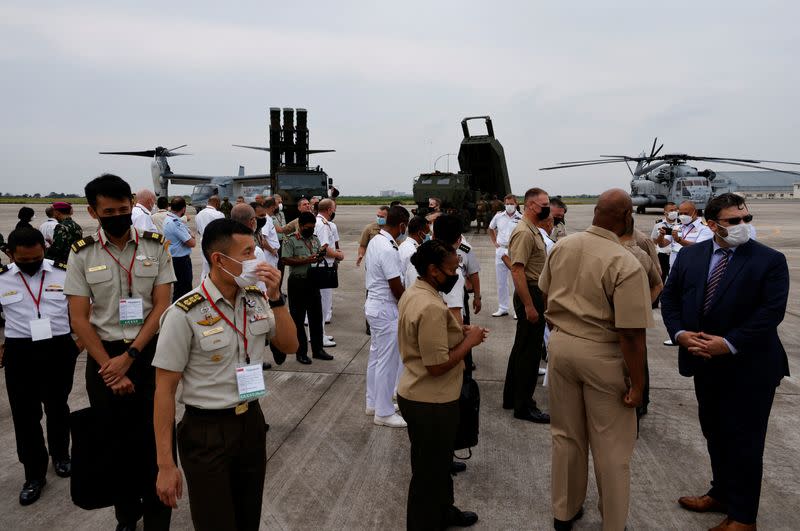 By Tim Kelly and Irene Wang

TOKYO (Reuters) – Military commanders from Japan, the United States, South Korea, the Philippines and fourteen other countries met in Tokyo this week for a gathering that Washington hopes will help forge cooperation between nations that can help it contain China.

The Pacific Amphibious Leaders Symposium (PALS) was started by the United States in Hawaii in 2015 as it began shifting away from a policy of engaging with China to one that tries to hem in Beijing’s influence. That included a military pivot by Washington to Asia and a push for deeper ties with like-minded nations in the region.

“There is no nation that can do it all by themselves, everyone has a piece to offer,” Lieutenant General Steven Rudder, Commander of US Marine Corps Forces Pacific, said in a closing address.

The four-day event, which on Thursday, is first hosted by Japan, and comes as Tokyo looks to take on a bigger regional security role to counter China, North Korea and Russia. Japan has criticized its neighbors for ignoring international norms and since Moscow’s attack on Ukraine has become alarmed about the prospect of Beijing using force to bring Taiwan under its control.

“PALS 2022 disseminates a powerful message that we do not allow unilateral changes to the status quo by force,” General Yoshihide Yoshida, Chief of Staff of Japan’s Ground Self Defense Force, said alongside Rudder.

China says its recent military exercises around Taiwan, which it considers as a part of its territory, are meant to defend its sovereignty.

Speaking in Singapore at the Shangri-La Dialogue on Saturday, Japanese Minister of Defense Nobuo Kishi described his country as being on a front line surrounded by rule-breaking nuclear-armed actors.

Around 70 PALS participants visited a naval base and army camp near Tokyo on Thursday to observe drills and inspect military equipment, including hovercraft and Osprey aircraft carrying troops. US Forces in Japan also displayed a High Mobility Rocket System (HIMARS) similar to ones the Pentagon is supplying Ukraine to help it fight off Russian invasion forces that Moscow says are there on a “special operation.”

Participants included military commanders from Southeast Asia, such as Thailand and Indonesia, that dispute parts of China’s territorial claims to most of the strategic South China.

Britain and France, which have sent naval patrols to Asia in recent years, and Pacific island nations including Fiji and the Maldives also felt representatives.