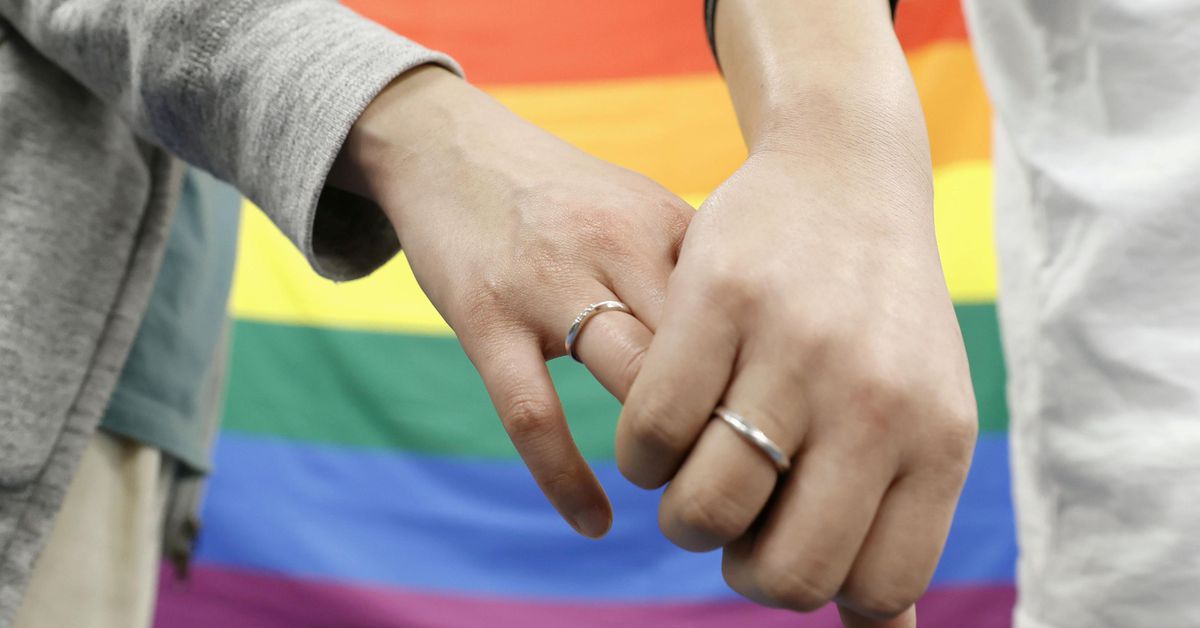 Plaintiffs hold hands each other after a district court ruled on the legality of same-sex marriages outside Sapporo district court in Sapporo, Hokkaido, northern Japan March 17, 2021, in this photo taken by Kyodo.

TOKYO, June 20 (Reuters) – A Japanese court on Monday ruled the country’s ban on same-sex marriage was not unconstitutional, dealing a setback to LGBTQ rights activists in the only Group of Seven nation that does not allow people of the same gender to marry

Three same-sex couples – two male, one female – had filed the case in the Osaka district court, only the second to be heard on the issue in Japan. In addition to rejecting their claim that being unable to marry was unconstitutional, the court threw out their demands for 1 million yen ($7,400) in damages for each couple.

The ruling dashes activists’ hopes of raising pressure on the government to address the issue after a Sapporo court in March 2021 ruled in favor of a claim that not allowing same-sex marriage was unconstitutional.

“After the Sapporo ruling, we were hoping for the same ruling or something even better.”

Japan’s constitution defines marriage as being based on “the mutual consent of both sexes”. But the introduction of partnership rights for same-sex couples in Tokyo last week, along with rising support in polls, had increased activists’ and lawyers’ hopes for the Osaka case.

Japanese law is considered relatively liberal in some areas by Asian standards, but across the continent only Taiwan has legalized same-sex marriage.

Under current rules in Japan, members of same-sex couples are not allowed to legally marry, cannot inherit each other’s assets – such as the house they may have shared – and also have no parental rights over each other’s children.

Although certificates issued by them some municipalities help same-sex couples to rent a place together have hospital visitation rights, they do not give the full legal rights enjoyed by heterosexual couples.

While Prime Minister Kishida has said the issue needs to be considered carefully, his Liberal Democratic Party (LDP) ruling has disclosed no plans to review the matter or propose legislation, though some senior LDP do favor reform.

An upcoming case in Tokyo means public debate on the issue will continue, particularly in the capital, where an opinion poll by the local government late last year found roughly 70% were in favor of the same-sex marriage.

Legalizing same-sex marriage would have far-reaching implications both socially and economically, activists say, by making it easier for companies to attract and retain talented workers, and even help lure foreign firms to the world’s-biggest economy.

“If Japan wants to once again take a leading position in Asia, it has a really good opportunity right now,” said Masa Yanagisawa, head of prime services at Goldman Sachs and a board member of activist group Marriage for all Japan, speaking prior to the Osaka verdict.

“International firms are reviewing their Asian strategy and LGBTQ inclusivity is becoming a topic…. International businesses don’t want to invest in a location that isn’t LGBTQ-friendly.”