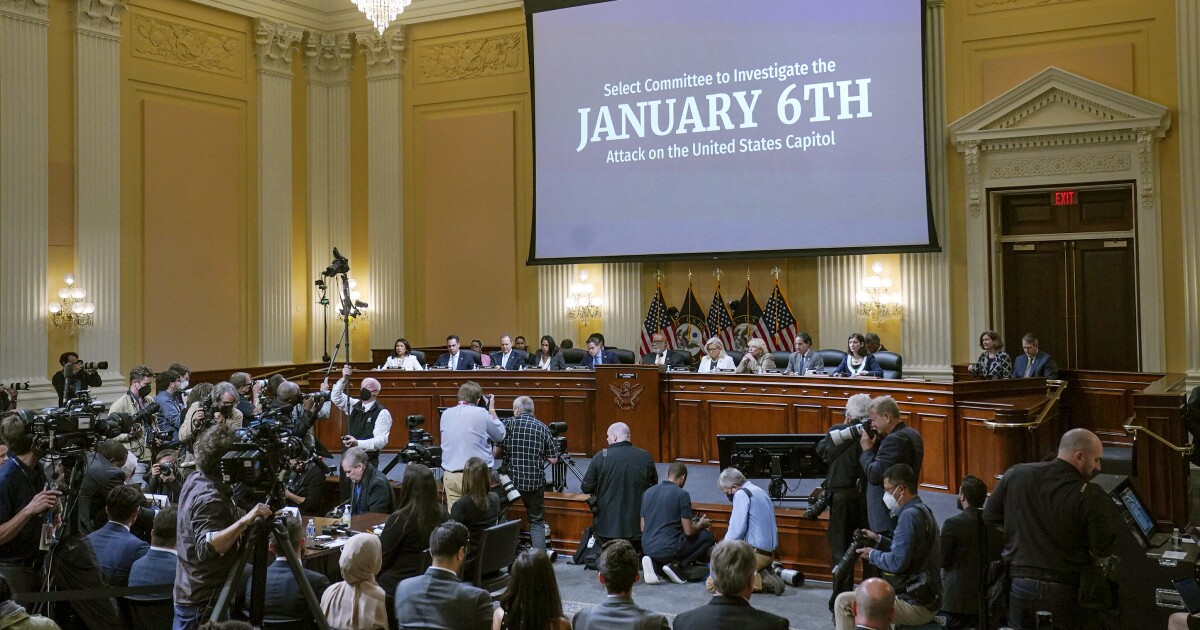 Former President Trump nearly replaced the head of the Department of Justice with a supporter of his fraud theories when the acting attorney general refused to comply with his demands to falsely claim there was evidence of fraud in the 2020 election, the House panel investigating the Capitol insurrection detailed in its hearing Thursday.

The committee also revealed that multiple Republican members of Congress asked for presidential pardons from Trump in the days after Jan. 6, 2021, including Reps. Matt Gaetz of Florida and Marjorie Taylor Greene of Georgia.

The committee argued that a declaration from Justice Department officials that fraud had taken place in the election would have cast doubt on the results and given GOP-controlled state legislatures a pretense for alternate presidential electors to reverse President Biden’s victory.

Former acting Atty. Gen. Jeffrey A. Rosen, former acting Deputy Atty. Gen. Richard Donoghue and former Asst. Atty. Gen. for the Office of Legal Counsel Steven Engel testified before the committee that had Trump asked the Justice Department in December to file legal briefs supporting election lawsuits brought by his campaign and his allies. Testimony also detailed Trump’s request that Rosen appoints a special counsel to investigate election fraud, although Justice Department investigations had concluded there was no evidence of fraud on a scale that would change the election’s outcome.

“Between Dec. 23 [2020] and Jan. 3 [2021], the president either called me or met with me virtually every day,” Rosen said. “The Justice Department declined all of those requests because we did not think they were appropriate based on the facts and the law as we understood them.”

The panel also discussed a push by the former president to have the Justice Department challenge election results in Arizona, Georgia, Michigan, Nevada, Pennsylvania and Wisconsin in the Supreme Court. Engel and the Office of Legal Counsel ruled there was no legal basis to bring such a lawsuit.

The committee focused on a handful of meetings in late December 2020 and early January 2021 in which Trump considered replacing Rosen with Jeffrey Clark, the head of the Justice Department’s civil division, at the prompting of Rep. Scott Perry (R-Pa.), including Dec. 27 phone call in which Trump told Rosen and Donoghue to “just say the election was corrupt and leave the rest to me and the Republican congressmen,” according to notes Donoghue took from the conversation.

Donoghue said that the Dec. 27 conversation was “an escalation” of the pressure Trump had been putting on the department to intervene. Donoghue said he tried to be extremely blunt with Trump and tell him the department had investigated and there was nothing to any of the claims he was repeating because he saw there were many voices whispering in Trump’s ear.

“As we got later in the month of December, the president’s entreaties became more urgent. He became more adamant that we weren’t doing our job,” Donoghue said.

Federal agents searched Clark’s Virginia home Wednesday. More than a dozen law enforcement officers seized Clark’s electronic devices as part of their search, according to his current boss, Russ Vought, former director of the Office of Management and Budget under Trump.

The panel also discussed the draft letter Clark circulated by email on Dec. 28, 2020, in which the Justice Department would urge the Georgia Legislature to hold a special session to scrutinize supposed “irregularities” in the state vote. The letter amounted to a road map for how Georgia could overturn its election results, suggesting the Legislature could ultimately choose a new slate of electors who would back Trump over Biden. Clark’s email indicates similar letters would be sent to officials in other states outlining allegations of fraud. Rosen and Donoghue refused.

Donoghue said he told Clark that “for the department to insert itself into the political process this way, I think would have had serious consequences for the country. It may very well have spiraled us into a constitutional crisis.”

But Clark began calling witnesses and began conducting investigations of his own, Donoghue said.

Committee Vice Chair Liz Cheney (R-Wyo.) said that the letter was co-written by Ken Klukowski, who joined the Justice Department on Dec. 15, 2020, and was assigned to work under Clark. Klukowski previously worked with conservative California lawyer John Eastman. Cheney presented to Dec. 28 email that recommended Eastman and Klukowski brief Vice President Mike Pence and his staff.

“The email suggests that Mr. Klukowski was simultaneously working with Jeffrey Clark to draft the proposed letter to Georgia officials to overturn their certified election, and working with Dr. Eastman to help pressure the vice president to overturn the election,” Cheney said.

In a contentious Dec. 31 meeting, Trump asked Rosen to have the Justice Department seize voting machines. Rosen said he told Trump nothing improper had been seen with the machines and the Department of Homeland Security had already looked at election machines and debunked any fraud claims.

“I don’t think there was legal authority” for the department to seize state election equipment, Rosen said.

On Jan. 3, 2021, Clark told Rosen that Trump had offered him the acting attorney general role.

White House call logs show frequent calls between Clark and Trump starting at 7 am Jan. 3. The logs showed Clark was referred to as “acting attorney general” by 4:19 pm, hours before Rosen met with Trump in the Oval Office to discuss the change.

Donoghue said he told Trump that the assistant attorney generals would resign, possibly followed by “hundreds and hundreds of resignations” of department employees and the possible total collapse of the Department. Engel warned that Clark would be leading a “graveyard.”

Donoghue told the committee that Cipollone referred to the letter Clark wanted to send to states as “a murder-suicide pact. It’s going to damage everyone who touches it. And we should have nothing to do with that letter. “

Rosen said in his deposition that after that Jan. 3 meeting he did not speak to Trump again until Jan. 19, which includes while the department was coordinating with Pence and Congressional leaders during the Jan. 6 attack.

The committee also for the first time provided evidence of its allegation in the first hearing that multiple Republican members of Congress had asked Trump for pardons after Jan. 6, including an email from Alabama Rep. Mo Brooks to the White House five days after the attack on the Capitol, asking for a pardon for himself and all 147 Republicans who voted to overturn the election.

The panel also showed parts of video depositions from White House staff who said that Gaetz, Andy Biggs of Arizona, Louie Gohmert of Texas and Scott Perry of Pennsylvania had asked Chief of Staff Mark Meadows for pardons, and that Greene had asked the White House counsel’s office for one.

Thursday’s hearing is expected to be the last for a few weeks. The committee will pause hearings for at least two weeks to examine new evidence it has obtained, Thompson said.