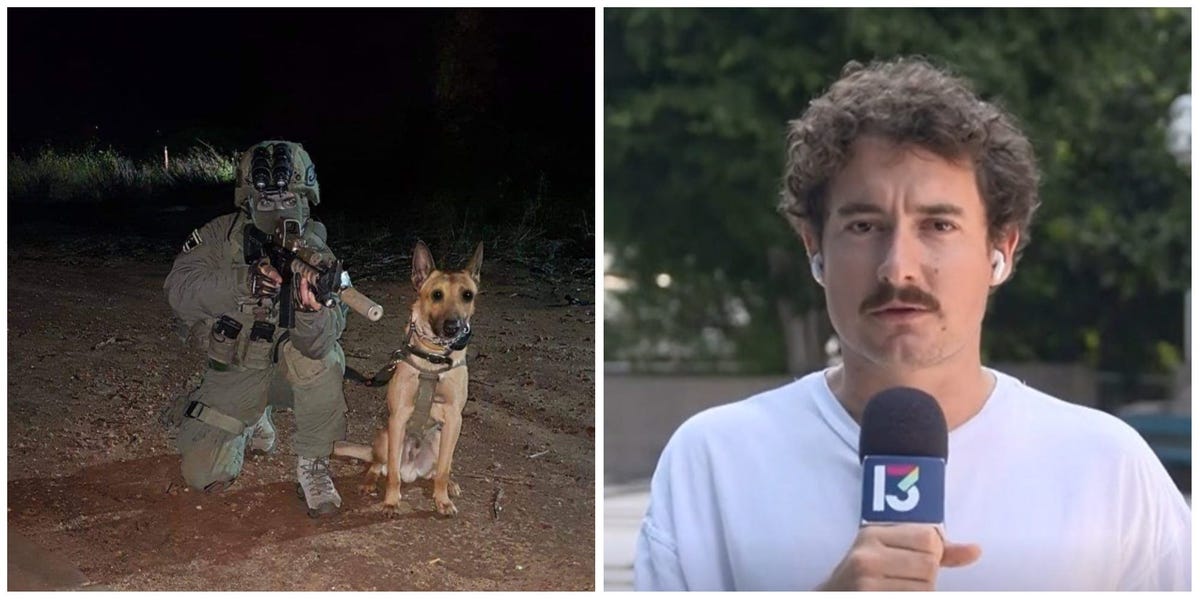 The dog had been on duty in hundreds of operations, say local reports, but last week was his final mission. Zili died in a shootout in Nablus on the West Bank earlier this week.

Zili’s unit exchanged fire with three suspected Palestinian militants, including Ibrahim Nabulsi, 26, a wanted senior member of the al-Aqsa Martyrs’ Brigades, according to the BBC.

Nabulsi was killed, along with two other militants, and 40 Palestinians were injured. The dog was the only Israeli causality reported.

His bravery was lauded in Israel. “Zili was part of the unit, appreciated and professional. He will be missed by the unit, the dog handlers and the fighters he accompanied on numerous operational missions,” Prime Minister Yair Lapid said in a statement, per i24 News.

Ben Silberstein, 29, the former IDF soldier who trained Zili, his namesake, took to Facebook to remember the dog and also to highlight the moral ambiguity of the treatment of a dog’s death in the wider context of the civilian victims of the Israel-Palestine conflict.

“I must admit that I initially felt mixed feelings regarding the story – on the one hand, sadness for the loss of a dog that I knew from the day he was born, and pride that his name is being shared by so many people and referred to as a ‘hero’,” he wrote.

But, he added: “I am indeed a dog person, but I am also a people person. The death of a 5-year-old girl saddens me, the indifference to her death saddens me.”

Silberstein was apparently referring to the death of five-year-old Alaa Qadoum, who was playing outside a relative’s home in the Gaza Strip when an Israeli airstrike hit the street and killed her, The New York Times reported.

She was one of the victims of the latest bout of fighting earlier this month between Israel and Palestinian militants based in the Gaza Strip. It began when Israeli forces assassinated the commander of the Palestinian Islamic Jihad. The militants responded by firing hundreds of rockets into Israel, mostly shot down by the Iron Dome defense system.

After three days of fighting, 49 Palestinian civilians were dead. Thirty were killed during Israeli strikes, including 17 civilians, among them three girls, a boy, and four women. Botched launches of Palestinian rockets killed 19, including 12 children, according to a report by Haaretz.

“The reality in which we live is a reality that an Israeli dog that is killed captures more media coverage than a 5-year-old Palestinian girl who was killed in Gaza,” he wrote on Facebook.

“She was an innocent little girl”

Alaa Qadoum was killed around 4:30 pm on August 5 by an Israeli airstrike in the Shuja’iyya neighborhood of Gaza City.

“She was an innocent little girl,” her grandfather said, per The New York Times. “Was she launching rockets on the border? She was a child who wanted to see her whole life ahead of her.”

We have to humanize casualties to end the conflict, says former IDF soldier

Speaking to Insider, Silberstein said that he made his Facebook post to draw attention to what he believes needs to be done to end Israel-Palestine conflict.

“We need to speak about the casualties of this conflict on both sides,” he said “If it’s a dog, if it’s a five-year-old kid from Gaza, or an Israeli soldier, Israeli civilian, or Palestinian civilian. I just think that we have to speak about it more, that’s the only way we can go into reconciliation between the two peoples.”

He added that it is important to focus on what living amid perpetual conflict means. He described communities “wounded by anxiety,” tormented by the knowledge that they or their loved ones could be killed at any moment.

Silberstein now works for the Geneva Initiative, a joint Israel-Palestine organization that is working to end the conflict.