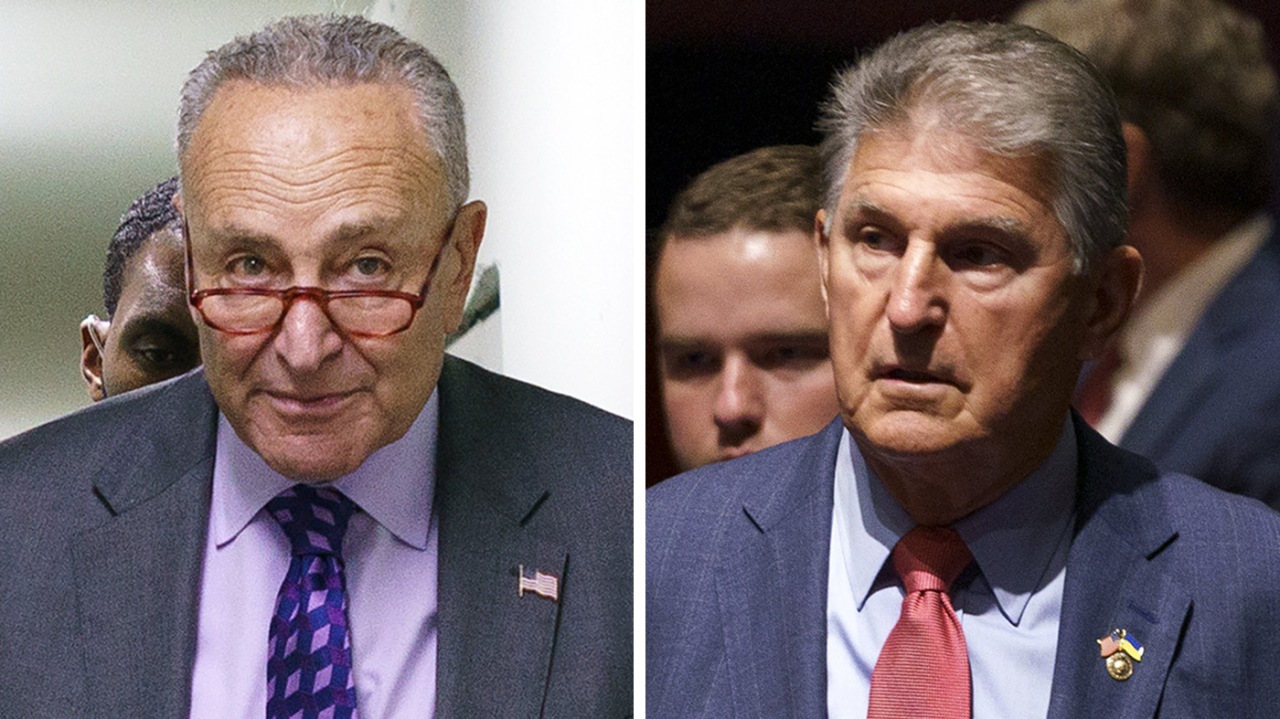 The announcement of the deal, which would raise $739 billion in new tax revenue, fund an array of new climate provisions and pay down $300 billion of the federal deficit, came as a complete surprise to their Senate colleagues.

It was all the more surprising because less than two weeks earlier, the talks between Schumer and Manchin fell apart in dramatic fashion, when Schumer signaled he would proceed with a scaled-down budget reconciliation bill that included only prescription drug reform and a two-year extension of expiring Affordable Care Act subsidies.

Manchin admitted Thursday morning he and Schumer lost theirs in a heated on July 14 when the Democratic leader accused him of “walking away” from a deal after months of negotiations.

“It got a little bit hot and heated if you will,” he said.

“He said you’re walking, you’re not going to do this or that,” Manchin recalled. “I said, ‘Chuck, I’m not walking away from anything, I’m just being very cautious. The people of West Virginia cannot afford higher prices. They can’t afford higher gasoline prices, higher food prices.’”

Manchin said the talks collapsed because of his reluctance to enact a big tax and climate bill after the Bureau of Labor Statics reported June 13 that inflation hit 9.1 percent in June compared to the year before.

Manchin said Schumer characterized him as walking away from the deal but insisted he never did so.

“I’ve never been in reverse in my lifetime and I never walked away,” he said.

Manchin said he bumped into Schumer again the following Monday and their tempers had cooled at that point.

“By Monday we ran into each other again. I said, ‘Are you still upset?’ He said, ‘I’m very discouraged.’ I said, ‘Well, you shouldn’t be. Something positive could be done if we all want to work rationally,’” Manchin said, recounting the key moment.

He said their staffs started working together in earnest the next day, Tuesday, July 19.

Manchin said his staff and Schumer’s staff picked up the things they were working on before and “started restructuring that.”

They finally hashed a deal on Tuesday evening, recognizing out they had to announce the package on Wednesday if it had any chance of passing before the scheduled start of a lengthy summer recess on Aug. 6.

“By Tuesday night, everyone — there wasn’t that many of us — those of us who might have had some disagreements, finally come to agreement,” he said. “We had the text pretty much lined up in that arena. That’s why the text was finished on Wednesday. Wednesday morning it was confirmed that it was a go.”

It just so happened the timing aligned perfectly with Schumer’s plan to hold a vote on final passage of the chips and science bill noontime Wednesday.

Republicans who voted for ten of billions of dollars for the domestic semiconductor manufacturing industry and the National Science Foundation were outraged and betrayed.

Sen. John Cornyn (R-Texas), a key player in getting the chips and science bill passed, said he received “assurance privately from some Democrats, including the staff of the Senate majority leader, that the tax and climate provisions were off the table, ” which Republicans said would be a precondition for moving the chips bill.

Cornyn took to the Senate floor Thursday afternoon to rail against the secret climate and tax deal.

“How can we negotiate in good faith, compromise where necessary, and get things done together after the majority leader and the senator from West Virginia pull a stunt like this?” he said with rising exasperation. “To look you in the eye and tell you one thing and to do another is absolutely unforgivable.”

Manchin on Thursday insisted that he and Schumer didn’t pull a “fast one” on Republicans by announcing the deal Wednesday afternoon.

“No, you know, I sure hope they don’t feel that way. I mean, I understand that they are, but I don’t know why,” he told reporters on a conference call.

Schumer told reporters Thursday afternoon that he and Manchin unveiled the legislative text and the summaries of the deal as soon as they finished it.

“Because of the length of the parliamentary birdbath, we wanted to get this done as quickly as possible,” he explained, making a reference to the work officials will do to determine if the package can be passed under an arcane budgetary rule being used to avoid the filibuster GOP.

Schumer noted that the talks with Manchin broke down on July 14 but that Manchin “came to visit me” on the following Monday, July 18.

“Manchin requested a meeting with me on the 18th and he said, ‘Can we work together and try to put together a bill?’ I said as long as we finished it in August, we’re not waiting until September,” he said.

Manchin said his staff took the lead at that point.

“It was me and my staff and then we worked with Schumer’s staff. My staff was driving it, we wrote the bill. Schumer’s staff would look at it, we’d negotiate,” he told West Virginia radio host Hoppy Kercheval Wednesday morning.

He said his staff shaved about $400 billion to $500 billion in other revenue-producing tax reforms from the bill.

“There was a lot more revenue in there before that,” he said, explaining how the bill changed after he and Schumer blew up at each other.

By Tuesday evening they agreed to setting a 15 percent corporate minimum tax on companies with profits in excess of $1 billion, beefing up IRS enforcement of tax compliance and closing the carried interest loophole that allows asset managers to pay capital-gains tax rates on income earned from profitable investments.

The Hill’s Morning Report — US economy shrinks, recession fears grow The Memo: No, really — What if Alexandria Ocasio-Cortez runs for president?

Manchin kept President Biden on the sidelines after last year’s negotiations between Manchin and the White House ended in failure and public recriminations after months of fruitless talks.

“President Biden was not involved,” he told West Virginia MetroNews.

“I was not going to bring the president in. I didn’t think it was fair to bring him in. This thing could very well have not happened at all,” he said, explaining he didn’t want to involve the president in case talks fell apart again.