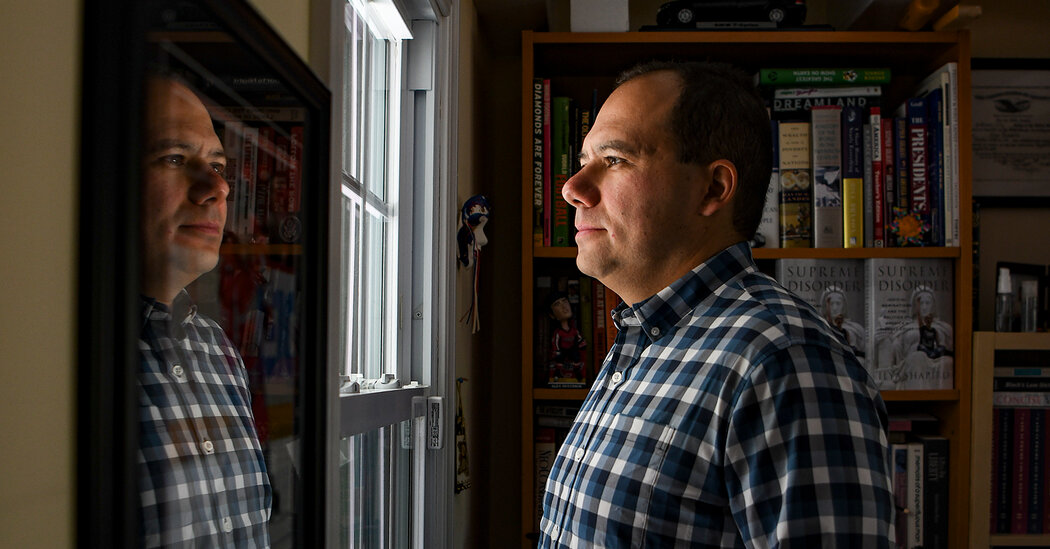 On Thursday, Ilya Shapiro, a legal scholar, announced his victory in the campus free speech wars: After a suspension and an investigation over a series of tweets, he was cleared to take his new job as a senior lecturer and executive director at Georgetown University’s Center for the Constitution.

But the reinstatement was not an unequivocal vote of confidence. Under fire for writing that President Biden would nominate a “lesser black woman” for the Supreme Court, he had been cleared on a technicality — that he was not yet employed by the university when he posted the tweets.

That turned out not to be enough. On Monday, in a head-spinning reversal, Mr. Shapiro announced that he was stepping down. Both announcements — of staying in his job and leaving his job — were made in The Wall Street Journal opinion section.

“I would have to be constantly walking on eggshells,” he said in an interview on Monday after his second opinion essay appeared online.

Mr. Shapiro’s about-face is the second case in two weeks of faculty leaving a high-profile university amid a speech dispute. Last month, Princeton University fired a tenured classics professor, Joshua Katz, in what many conservative activists believed was punishment for a 2020 article in the online journal Quillette that criticized a slate of what classics was billed as anti-racist proposals by Princeton faculty, students and staff.

Princeton said he was not being fired for his speech, but for not being fully cooperative with an investigation into a sexual relationship with a student, which he had admitted to and been punished for, but which was resurrected during the controversy over his views.

Mr. Shapiro, 44, a Princeton alumnus, had been one of Dr. Katz’s supporters. Writing in The National Review after Dr. Katz was fired, Mr. Shapiro said, “The firing of Joshua Katz shows that Princeton no longer stands for tolerance, respect, good faith, and excellence.”

On Monday, Mr. Shapiro said that Dr. Katz’s firing “was definitely in my mind as part of the consideration of what to do, over the weekend, not because of any sexual misconduct, but simply because his case him shows that anything can be used as a pretext to punish wrong-speak. ”

He said that given his experience, he had no current plan to return to academia. “Academy has become an intolerant place for anyone, not just conservatives but anyone who seeks the truth,” Mr. Shapiro said. (He calls himself a “classical liberal” but says others describe him as a libertarian conservative.)

The intolerance, he said, was enforced by nondiscrimination and antiharassment offices such as Georgetown’s Office of Institutional Diversity, Equity and Affirmative Action, which investigated him. “It is one of the most pernicious parts of recent developments in academia where it’s kind of an Orwellian situation, where in the name of diversity, equity and inclusion, bureaucrats enforce an orthodoxy that stifles intellectual diversity,” he said.

Georgetown spokeswoman Meghan M. Dubyak said: “While we protect speech and expression, we work to promote civil and respectful discourse. In reviewing Mr. Shapiro’s conduct, the university followed the regular processes for members of the law center staff.”

Mr. Shapiro’s troubles began with a tweet in late January, a few days before he was to begin working at Georgetown Law, and just as Mr. Biden was selecting a Supreme Court nominee — who he had promised would be a Black woman.

“Objectively best pick for Biden is Sri Srinivasan, who is solid prog & v smart,” he wrote. “He even has identity politics benefit of being first Asian (Indian) American. But alas doesn’t fit into the latest intersectionality hierarchy so we’ll get lesser black woman. Thank heaven for small favors?”

Mr. Shapiro quickly apologized for the tweet, calling it “inartful” and deleted it. Trying to fit his message into Twitter’s short format hadn’t helped, he said on Monday.

Last week, on the same day Mr. Shapiro declared that he had beat cancellation, the dean of Georgetown University Law Center, William M. Treanor, issued a statement on the case.

“His tweets could be reasonably understood, and were in fact understood by many, to trigger any Black woman the president might nominate,” Mr. Treanor wrote. “As I wrote at the time, Mr. Shapiro’s tweets are antithetical to the work that we do at Georgetown Law to build inclusion, belonging and respect for diversity. They have been harmful to many in the Georgetown Law community and beyond.”

Georgetown is dedicated to free speech, he said, but that “does not mean that individuals may say they wish, wherever they wish whatever.”

The dean said he had been concerned about whether Mr. Shapiro could be an effective administrator if his tweets were viewed as hostile to certain groups.

Mr. Shapiro said that while giving up the job was a big step, he had foreseen the possibility. “During my purgatory, during this sham four-month investigation, I was prepared by various organizations and I made my own preliminary inquiries about for if Georgetown was to fire me, or if I had to leave eventually,” he said.

In his opinion piece, Mr. Shapiro faulted Georgetown’s speech code for being based not on an objective standard or the speaker’s intention, but on the reaction of those who heard it.

He argued that he could run afoul of the rules by, for instance, praising Supreme Court decisions that would overrule Roe v. Wade and protect the right to carry arms.

He also argued that inflammatory tweets that reflected the prevailing orthodoxy were not punished, citing Carol Christine Fair, a professor in the School of Foreign Service who had tweeted about a “chorus of entitled white men justifying a serial rapist’s arrogated entitlement” during the confirmation of Justice Brett M. Kavanaugh. “Bonus: we castrate their corpses and feed them to swine? Yes,” she continued.

Professor Fair said on Monday that at the time she made the tweet, she was already a target of death and rape threats, and her posts had become “performative.” The fallout, including threats to “elderly ladies working in the dining hall, students in the library,” had been so bad for the community that she had taken a research leave to go to Afghanistan, where she felt safer.

Professor Fair said she was one of only a few Georgetown faculty members who signed a petition supporting Mr. Shapiro after the ruckus about his posts from him. And she said that without knowing him, she did not think his tweet was racist, given that “he actually put forward a person of color.”

But student complaints are “the death knell,” she said.

“I am a fundamentally principled person,” she said. “I have no patience for cancel culture. None. And I don’t care who’s arguing for the cancellation.”