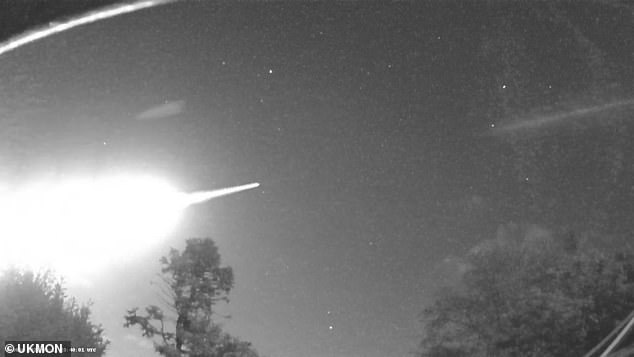 A huge fireball has been filmed streaking across the sky in Britain.

The dazzling meteor burned up over the south west of England just after midnight on Thursday, with sightings in South Wales, Hertfordshire and West Sussex.

UK Meteor Network (UKMON), which runs a network of 153 detection cameras recording meteors and fireballs over the UK, said the fireball was picked up by fifteen of its cameras at 00:39 BST (23:39 GMT).

Over 250 members of the public also reported the event through UKMON’s website, after capturing images and footage on their dashcams and video doorbells.

Several reports claimed the fireball had a green colour, which may point to the composition of the meteoroid, suggesting it has higher magnesium content, according to UKMON.

Over 250 members of the public reported the event through UKMON’s website, after capturing images and footage on their dashcams and video doorbells 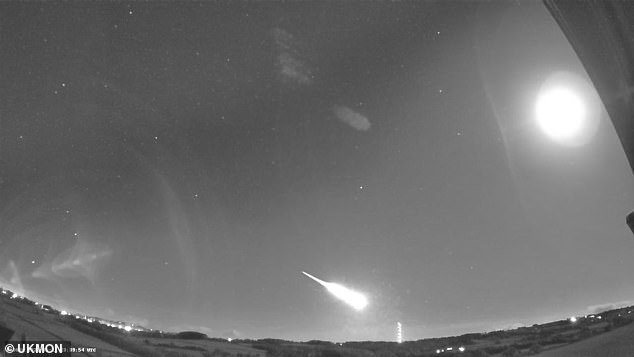 UKMON described it as ‘significant fireball’ and ‘very large meteor event’, adding that ‘some cameras are completely oversaturated’

Each network, including UKMON, shares the recorded data with UKFall (The UK Fireball Alliance) to calculate trajectory of the possible meteorite falls over the UK.

‘Preliminary analysis from UKMON data shows terminal altitude around 30km above the ground and velocity of 6.9km/s which is exciting,’ Richard Kacerek founder of UK Meteor Network told MailOnline.

‘This information means there is a potential fall, again!

‘But we might need a scuba suit and snorkel, as any meteorite most likely fell into the Bristol Channel.’ 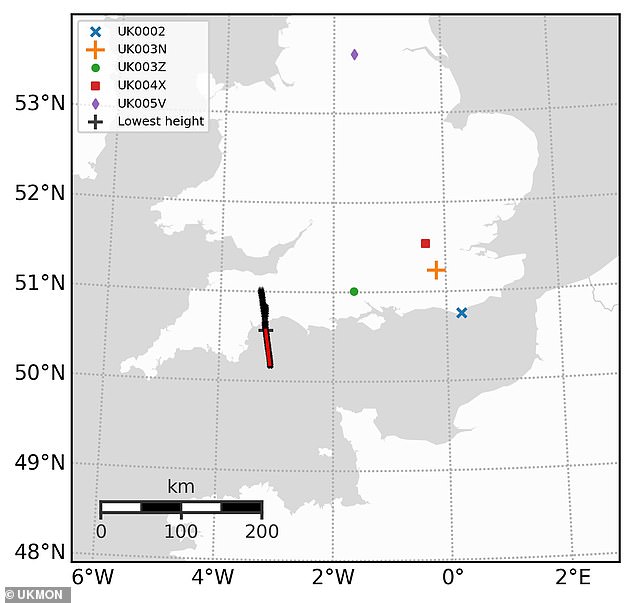 The dazzling meteor burned up over the south west of England just after midnight on Thursday, with sightings in South Wales, Hertfordshire and West Sussex. 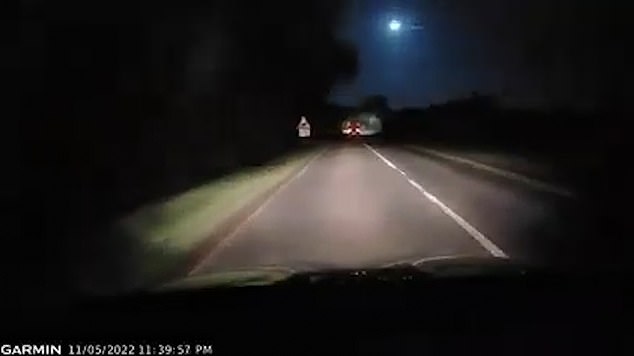 Several reports claimed the fireball had a green colour, which may point to the composition of the meteoroid, according to UKMON 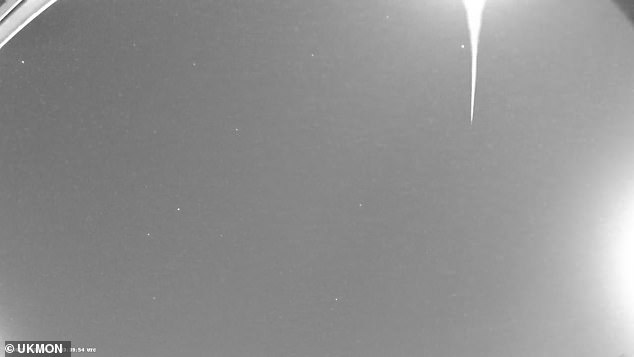 Preliminary analysis from UKMON data shows terminal altitude around 30km above the ground and velocity of 6.9km/s

A family who had a meteorite land outside their Cotswolds home said they thought someone had emptied a barbeque onto their drive.

Hannah Wilcock, 25, and her parents were astounded to learn the ‘lumps of coal’ they heard hit their drive on the night of February 28 were fragments of a 4.6-billion-year-old meteorite.

Weighing around 300g in total the meteorite pierced through the sky and crashed onto their driveway in Winchcombe, Gloucestershire.

The meteorite is some of the most valuable space rock ever to fall on the UK and has had metal detectorists scouring fields in Gloucestershire.

Hannah said she had been inside her parent’s home when she heard a thud, she told the BBC: ‘When I heard it drop, I stood up and looked out the window to see what was there.

‘But because it was dark, I couldn’t see anything. It was only the next morning when we went out that we saw it on the drive – a bit like a kind of splatter.

‘And in all honesty, my original thought was – has someone been driving around the Cotswolds lobbing lumps of coal into people’s gardens?’

Ross Watkins caught the spectacle on his car dashcam in Herefordshire, traveling West towards Bromyard.

He said: ‘It was extremely impressive and glad I caught it on my dashcam.’

Kevin and Johanna Stubberfield were taken by surprise when the sky was lit up for a few seconds by the fireball as they neared their home in Enborne, Berkshire.

Mrs Stubberfield, 48, said: ‘I was asleep so only caught the end of it but Kevin woke me up because he was so surprised.

‘Kevin had no idea what it was and we didn’t know what the dashcam footage would show until we got home.

‘All we could see was bright green to start with, we think because the brightness of the meteor was too much for the camera, then all of a sudden we saw the streak of the meteor as clearly as anything.

The hunt is still on for a meteorite that is thought to have landed in Shropshire last month, after a fireball was spotted in the skies on 13 April.

Scientists from the UK Fireball Alliance (UKFAll) believe that fragments of the meteorite landed somewhere south of the market town of Shrewsbury.

Aine O’Brien, from the UK Fireball Alliance, told BBC News that the rock was likely older than Earth and could unlock more knowledge of the solar system.

However, after three weeks of searching, and despite some ‘really promising’ submissions, no fragment of the meteorite has yet officially been found.

The meteorite fragments are thought to be shiny, almost iridescent, and dark in colour. The rocks could be as small as a fingernail but no bigger than a fist and would be heavy for their size. 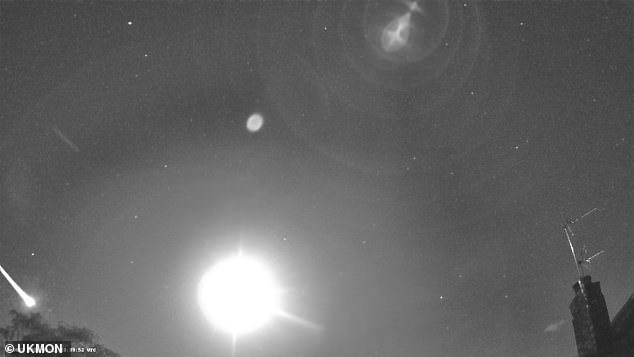 Each network, including UKMON, shares the recorded data with UKFall (The UK Fireball Alliance) to calculate trajectory of the possible meteorite falls over the UK 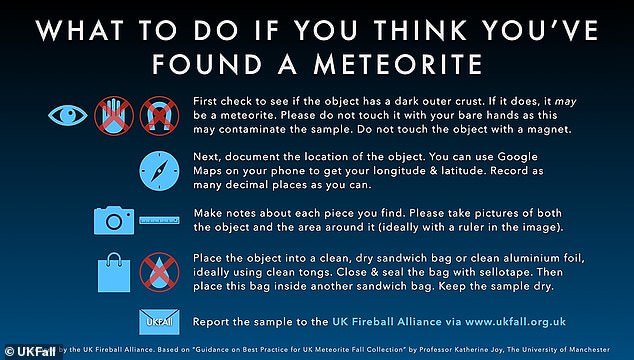 UKFAll says if you think you’ve found a meteorite you shouldn’t pick it up with your bare hands, but use aluminum foil or a sandwich bag

Explained: The difference between an asteroid, meteorite and other space rocks

An asteroid is a large chunk of rock left over from collisions or the early solar system. Most are located between Mars and Jupiter in the Main Belt.

THE commit is a rock covered in ice, methane and other compounds. Their orbits take them much further out of the solar system.

THE meteor is what astronomers call a flash of light in the atmosphere when debris burns up.

This debris itself is known as a meteoroid. Most are so small they are vapourised in the atmosphere.

If any of this meteoroid makes it to Earth, it is called a meteorite.

Meteors, meteoroids and meteorites normally originate from asteroids and comets.

For example, if Earth passes through the tail of a comet, much of the debris burns up in the atmosphere, forming a meteor shower.