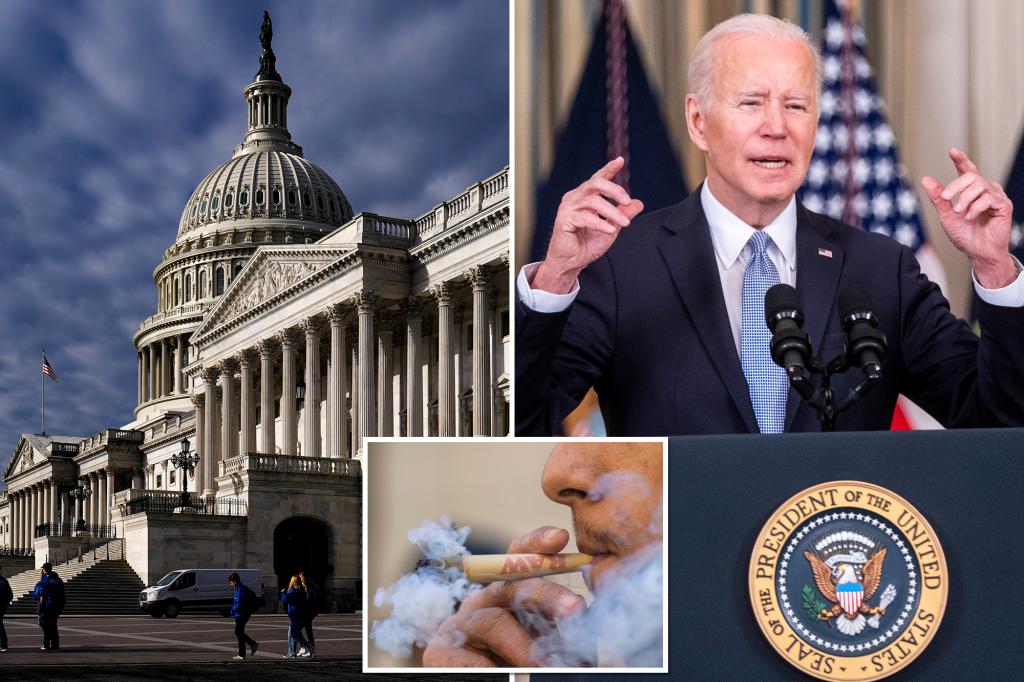 WASHINGTON — The House of Representatives on Friday voted to federally legalize marijuana, but the bill faces long odds in the Senate and a possible veto by President Biden, who opposes legalizing pot.

The bill would remove marijuana from the Controlled Substances Act and let states set their own policies. Biden has not specifically addressed his stance on the bill, but his aides say he opposes legalization while supporting more limited steps toward decriminalization.

The Marijuana Opportunity, Reinvestment and Expungement (MORE) Act passed 220-204. Two Democrats voted against it and only three Republicans voted in favor.

Some Republicans argued Congress should be focused on more pressing matters such as soaring inflation — while other Republicans, including some marijuana reform advocates, quibbled with the bill’s policies.

A recent Gallup poll found 68 percent of Americans, including half of Republicans, support legalizing pot, and federal legalization is widely considered inevitable due to overwhelming support among younger adults. Since 2012, 18 states, two territories and Washington, DC, have legalized recreational marijuana under local law. Most other states allow marijuana possession for medical purposes.

Bill sponsor Rep. Jerry Nadler (D-NY) urged colleagues to support the MORE Act, saying Friday, “This bill will greatly reduce crime by redefining as not crimes things that are now considered crimes and by releasing people in jail who should not be in jail.”

But Rep. Jim Jordan (R-Ohio) said Democrats called the vote because they “can’t deal” with other problems, such as inflation and illegal immigration, both at four-decade highs.

“Do you know why they’re dealing with this today? Because they can’t deal with the real problems facing the American people,” Jordan said. “The left will not let the Democrats do what needs to be done to help the employment problem, the energy problems, the illegal immigration problem on our southern border. So what did they do? They legalize drugs.”

However, Rep. Earl Blumenauer (D-Ore.) said the measure was overdue and that “48 states have some form of legalization” already, though federal prohibition makes it tough for state-legal businesses to access banking services and for researchers to study pot because it’s in the highly restricted federal Schedule I.

Libertarian Rep. Thomas Massie (R-Ky.) tweeted, “The MORE Act is supposed to make marijuana MORE legal but it creates: MORE marijuana crimes, MORE federal taxes, MORE government spending, MORE central planning. Why not just get the Feds out of it?”

Rep. Dave Joyce (R-Ohio), co-chairman of the Congressional Cannabis Caucus, also opposed the bill, writing in an op-ed that he wanted the bill to do more to set up a federal regulatory framework. Joyce added, “the MORE Act is a messaging bill at best and at worst, irresponsible.”

The bill previously passed the House in December 2020, but that feat was overshadowed by the then-raging COVID-19 pandemic and a contentious post-election presidential transition.

Senate Majority Leader Chuck Schumer (D-NY) is an enthusiastic advocate of pot legalization, but a handful of Senate Democrats are opposed, meaning it likely lacks 60 votes needed to proceed.

Outraging marijuana advocates, the White House proposed a federal budget this week that would keep a long-running restriction that bans local officials in DC from taking steps to regulate recreational pot shops.

Biden, who turns 80 this year, wrote some of the nation’s harshest drug laws during his 36 years in the Senate, but he relaxed his stance during the 2020 presidential campaign.

Until the 2019 presidential primary debate, Biden said that if elected, he wanted to release “everyone” in prison for marijuana. But after more than a year in office, he has yet to use his clemency powers to free anyone from prison.

The president laughed off a question from The Post in November about whether he would be freeing marijuana inmates — saying ahead of Thanksgiving it would be “just turkeys.”

Some people are still serving life in federal prison for large-scale marijuana operations, including Ismael Lira, 44, and Pedro Moreno, 62, who were convicted of distributing marijuana imported from Mexico.

Another federal inmate, Luke Scarmazzo, 41, has served 14 years of a 22-year sentence for running a medical marijuana operation in California.

Last year, President Donald Trump commuted the sentences of seven people serving life terms for marijuana — including two men who were given life without parole under the three-strikes provision of the Biden-authored 1994 crime law.

Trump in 2018 endorsed a different bill to federalize marijuana policy. That bill, drafted by then-Sen. Cory Gardner (R-Colo.), did not pass.

Voters in a 19th state — South Dakota — voted to legalize pot but the ballot measure was overturned in court.