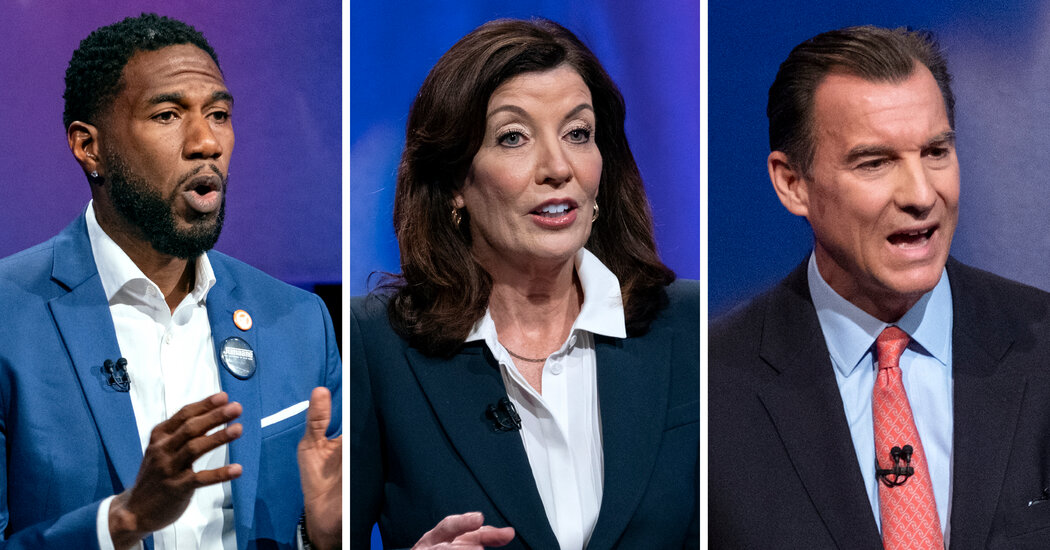 In the second and final debate in the Democratic primary race for governor of New York, Gov. Kathy Hochul and her dela opponents two dela opponents tangled over highly volatile issues, including rising crime, dwindling affordable housing, looming environmental catastrophe — and how they take their bagel.

The hourlong tussle was far from pretty and often outright sour, as Mr. Williams and especially Mr. Suozzi heaped on accusations that the governor was ethically compromised, insufficiently qualified and unwilling or unable to protect New Yorkers.

“Governor? governor? Governor?” Mr. Suozzi, a Long Island centrist, repeated impatiently during one memorable back and forth. He was trying to force Ms. Hochul look his way after she condemned him for once ostensibly Florida’s “Don’t Say Gay” bill (comments he’s since recanted), but the exchange just as well summed up the entire evening.

Ms. Hochul merely smiled and kept her gaze straight ahead. When she exited 30 Rockefeller Plaza in Midtown Manhattan a short time later, there were signs the governor had been bruised but little to suggest that either opponent had succeeded in fundamentally shifting the dynamics of a race now verging on a blowout as it enters its final, frantic stretch.

Still, the debate, hosted by NBC New York, Telemundo 47 and The Times Union of Albany, was often more substantive and confrontational than the Democrats’ first debate just over a week ago.

The candidates fought over housing policy and evictions. Mr. Suozzi, who is running on a platform of cutting taxes and fighting crime, accused the governor of “irresponsibly” spending federal Covid money that has flooded the state, including through direct payments to help cash-strapped New Yorkers make rent.

Ms. Hochul scoffed. “I don’t think that spending money on people who are at risk of losing their homes is irresponsible,” she said. “I would do it any day of the week.”

Mr. Williams, a progressive who favors a more expansive set of government protections, used the opportunity to argue for so-called good-cause eviction legislation that would cap rent increases and make it harder to out tenants. The governor does not openly support the bill, which is opposed by New York’s powerful real estate industry.

A similar pattern played out when the candidates discussed elevated crime rates in New York City and a heightened sense of fear among New Yorkers since the pandemic began, particularly on the subway.

Ms. Hochul defended her administration’s efforts — including tweaks to New York’s bail laws — as a work in progress and touted her collaboration with Mayor Eric Adams on “giving people that sense of security” and protecting those suffering from mental health issues.

This time, Mr. Suozzi was not persuaded.

“We hear the governor’s speech about ‘we’re spending money on this, we’re going to get to that,’” he said. “Under this administration, they are not safer.”

Mr. Williams, again, said he would take a more holistic approach than Ms. Hochul or her predecessors of her had, calling for building “a continuum of care structure for mental health to make sure people have a house to stay in.”

There were salient differences that emerged.

The candidates disagreed on whether they would welcome the support of former Gov. Andrew. M. Cuomo, who resigned last year in the face of sexual harassment allegations. Mr. Williams said no, and Ms. Hochul went out of her way to put extra distance between herself and her dela onetime boss dela.

“While he has a lot of baggage along with what he’s done, he’s accomplished a great deal in the State of New York,” Mr. Suozzi said as he answered yes.

When Ms. Hochul and Mr. Suozzi said they were focused on building greater resilience against the effects of climate change, like floods and extreme heat, Mr. Williams accused the governor of not enough doing to advance a congestion pricing plan for car users in New York City (she later said she supported the plan) and failing to fund New York’s climate law.

“Under the Williams administration, you wouldn’t have to ask for that,” he said.

Polls consistently put Ms. Hochul ahead by comfortable double digits; she is spending more on advertisements in the contest’s final weeks than her primary opponents have raised this year collectively; and this week, she won the support of The New York Times editorial board and Mayor Adams, two endorsements that Mr. Suozzi and Mr. Williams had badly wanted.

On Thursday, Mr. Suozzi, an ally of Mr. Adams who was offered a job in his administration of him, dismissed the endorsement as “political reality” because the governor has “a lot of power right now.”

“They say if you want a friend in politics, get a dog,” he said.

But the candidates still have a flurry of campaigning ahead of them, and with turnout expected to be low, political analysts caution that the contest could ultimately be closer than it appears, given Mr. Suozzi’s base of support in the Long Island suburbs and Mr. Williams’s strong ties to vote-rich Brooklyn.

Early voting in both party primaries begins on Saturday.

The Democratic nominee will face the winner of a four-person Republican race among Representative Lee Zeldin; Rob Astorino, the former Westchester County executive; the businessman Harry Wilson; and Andrew Giuliani, son of the former mayor Rudolph W. Giuliani. Republicans are set to participate in one final debate next week.

On Thursday, the Democrats saw fit to just keep pummeling themselves, however.

With the nation — and Buffalo — reeling from a spate of mass shootings, Mr. Williams and Mr. Suozzi repeatedly attacked Ms. Hochul for accepting the support of the National Rifle Association when she was a congressional candidate for decade ago. Ms. Hochul took umbrage at the “attacks” and said her decision to sign a suite of new gun safety measures into state law this month was proof she had evolved.

“It’s not an attack, governor, that’s the fact: You were endorsed by the NRA,” Mr. Suozzi said. “I know you want to slough it off.”

Ms. Hochul was not pleased: “Excuse me, it’s my turn to answer the question,” she said, and then added, “please stop interrupting me.”

Toward the end of the night, after Mr. Suozzi knocked the governor for picking a lieutenant governor later indicted on bribery cartoons, Ms. Hochul tried to turn the tables and attack Mr. Suozzi for a congressional ethics investigation into his stock trading.

“The word hypocrisy does come to mind,” she said. Mr. Suozzi played down the inquiry as nothing more than late-filed paperwork.

Mr. Williams also found himself under scrutiny at one point when Melissa Russo, one of his moderators, pressed him on his own political evolution on two matters of Democratic orthodoxy: abortion and gay marriage.

Mr. Williams said his position on abortion had not changed, but that now he tried to “center the people who are most affected.”

The moderators tried to end the evening on some lighter fare, but even on their favorite circular nosh, Mr. Williams, Mr. Suozzi and Ms. Hochul were left hopelessly at odds.

“My mother when I was younger always got me a bagel with lox, cream cheese onions and capers,” Mr. Williams said of his preferred order.

“I have a sweet tooth, everybody knows that,” she said. “It’s going to be a cinnamon raisin with whatever sweet cream cheese they’ll put on it, usually maple syrup.”