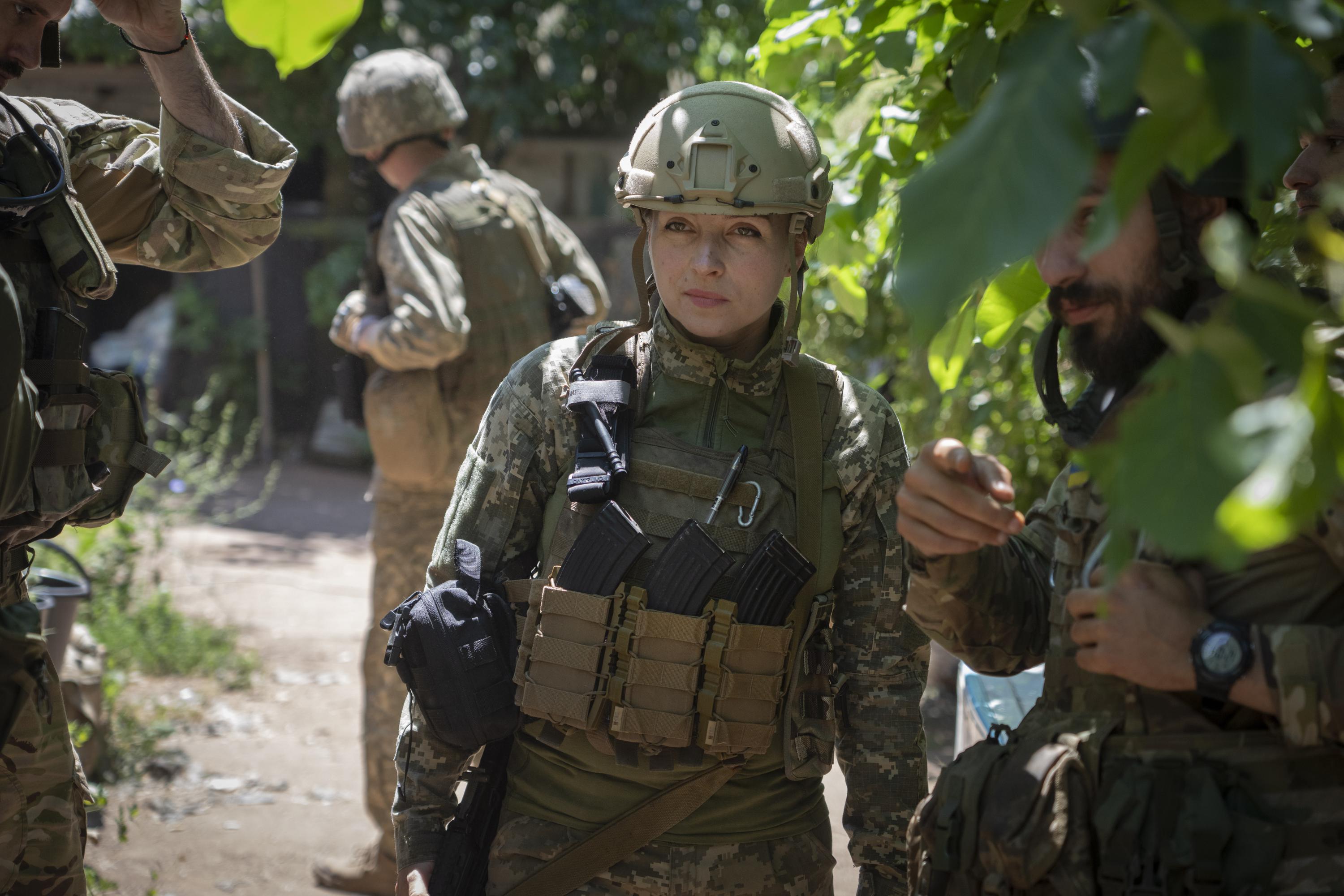 BAKHMUT, Ukraine (AP) — Torched forests and cities burned to the ground. Colleagues with severed limbs. Bombardments so relentless the only option is to lie in a trench, wait and pray.

Ukrainian soldiers returning from the front lines in eastern Ukraine’s Donbas region — where Russia is waging a fierce offensive — describe life during what has turned into a grueling war of attrition as apocalyptic.

In interviews with The Associated Press, some complained of chaotic organization, desertions and mental health problems caused by relentless shelling. Others spoke of high morale, their colleagues’ heroism, and a commitment to keep fighting, even as the better-equipped Russians control more of the combat zone.

Lt. Volodymyr Nazarenko, 30, second-in-command of the Ukrainian National Guard’s Svoboda Battalion, was with troops who retreated from Sievierodonetsk under orders from military leaders. During a month-long battle, Russian tanks obliterated any potential defensive positions and turned a city with a prewar population of 101,000 into “a burnt-down desert,” he said.

“They shelled us every day. I don’t want to lie about it. But these were barrages of ammunition at every building,” Nazarenko said. “The city was methodically leveled out.”

At the time, Sievierodonetsk was one of two major cities under control in Luhansk province, where pro-Russia separatists declared an unrecognized republic eight years ago. By the time the order to withdraw came on June 24, the Ukrainians were surrounded on three sides and mounting a defense from a chemical plant also sheltering civilians.

“If there was a hell on Earth somewhere, it was in Sievierodonetsk,” Artem Ruban, a soldier in Nazarenko’s battalion, said from the comparative safety of Bakhmut, 64 kilometers (40 miles) to the southwest of the since-captured city. “The inner strength of our boys allowed them to hold the city until the last moment.”

“Those were not human conditions they had to fight in. It is difficult to explain this to you here, what they feel like now or what it was like there,” Ruban said, blinking in the sunlight. “They were fighting until the end there. The task was to destroy the enemy, no matter what.”

Nazarenko, who also fought in Kyiv and elsewhere in the east after Russia invaded Ukraine, considers the Ukrainian operation in Sievierodonetsk “a victory” despite the outcome. He said the defenders managed to limit casualties while stalling the Russian advance for much longer than expected, depleting Russia’s resources.

“Their army incurred huge losses, and their attack potential was obliterated,” he said.

Both the lieutenant and the soldier under his command expressed confidence that Ukraine would take back all occupied territories and defeat Russia. They insisted morale remained high. Other soldiers, most with no combat experience before the invasion, shared more pessimistic accounts while insisting on anonymity or using only their first names to discuss their experiences.

Oleksiy, a member of the Ukrainian army who started fighting against the Moscow-backed separatists in 2016, had just returned from the front with a heavy limp. He said he was wounded on the battlefield in Zolote, a town the Russians also have since occupied.

“On the TV, they are showing beautiful pictures of the front lines, the solidarity, the army, but the reality is very different” he said, adding he does not think the delivery of more Western weapons would change the course of the war.

His battalion started running out of ammunition within a few weeks, Oleksiy said. At one point, the relentless shelling kept the soldiers from standing up in the trenches, he said, exhaustion visible on his lined face.

A senior presidential aid reported last month that 100 to 200 Ukrainian troops were dying every day, but the country has not provided the total number killed in action. Oleksiy claimed his unit his lost 150 men during its first three days of fighting, many from a loss of blood.

Due to the relentless bombardments, wounded soldiers were only evacuated at night, and sometimes they had to wait up for two days, he said.

“The commanders don’t care if you are psychologically broken. If you have a working heart, if you have arms and legs, you have to go back in,” he added.

Mariia, a 41-year-old platoon commander who joined the army in 2018 after working as a Ukrainian lawyer and giving birth to a daughter, explained that the level of danger and discomfort can vary greatly depending on a unit’s location and access to supply lines .

Front lines that have existed since the conflict with pro-Russia separatists began in 2014 are more static and predictable since, whereas places that became battlegrounds Russia sent its troops in to invade are “a different world,” she said.

Mariia, who refused to share her surname for security reasons, said her husband is currently fighting in such a “hot spot.” Everyone misses and worries about their loved ones, and though this causes distress, her subordinates have kept their spirits high, she said.

“We are the descendants of Cossacks, we are free and brave. It is in our blood,” she said. “We are going to fight to the end.”

Two other soldiers the AP interviewed — former office-workers in Kyiv with no prior battle experience — said they were sent to the front lines in the east as soon as they completed their initial training. They said they observed “terrible organization” and “illogical decision-making,” and many people in their battalion refused to fight.

One of the soldiers said he smokes marijuana daily. “Otherwise, I would lose my mind, I would desert. It’s the only way I can cope” he said.

A 28-year-old former teacher in Sloviansk who “never imagined” he would fight for his country described Ukraine’s battlefields as a completely different life, with a different value system and emotional highs as well as lows.

“There is joy, there is sorrow. Everything is intertwined,” he said.

Friendship with his colleagues provide the bright spots. But he also saw fellow soldiers succumbing to extreme fatigue, both physical and mental, and displaying symptoms of PTSD.

“It’s hard to live under constant stress, sleep-deprived and malnourished. To see all those horrors with your own eyes — the dead, the turn-off limbs. It is unlikely that someone’s psyche can withstand that,” he said.

Yet he, too, insisted that the motivation to defend their country remains.

“We are ready to harden and fight with clenched teeth. No matter how hard and difficult it is,” the teacher said, speaking from a fishing store that was converted into a military distribution hub. “Who will defend my home and my family, if it is not me?”

The center in the city of Sloviansk provides local military units with equipment and provisions, and gives soldiers a place to go during brief respites from the physical grind and horrors of battle.

Tetiana Khimion, a 43-year-old dance choreographer, set up the center when the war started. All kinds of soldiers pass through, she says, from skilled special forces and war-hardened veterans to civilians-turned-fighters who signed up only recently.

“It can be like this: For the first time he comes, smiles widely, he can even be shy. The next time he comes, and there is emptiness in his eyes from him,” Khimion said. “He has been through something, and he is different.”

Behind her, a group of young Ukrainian soldiers on rotation from the front lines sit sharing jokes and a pizza. The thud of artillery can be heard a few miles away.

“Mostly they hope for the better. Yes, sometimes they come in a little sad, but we hope to raise their spirits here, too,” Khimion said. “We hug, we smile at each other and then they go back into the fields.”

On Sunday, Russian forces occupied the last stronghold in Luhansk province and stepped up rocket strikes on Donetsk, the Donbas Ukrainian province where the center is located.

Valerii Rezik contributed to this story.

Follow AP’s coverage of the Russia-Ukraine war at https://apnews.com/hub/russia-ukraine