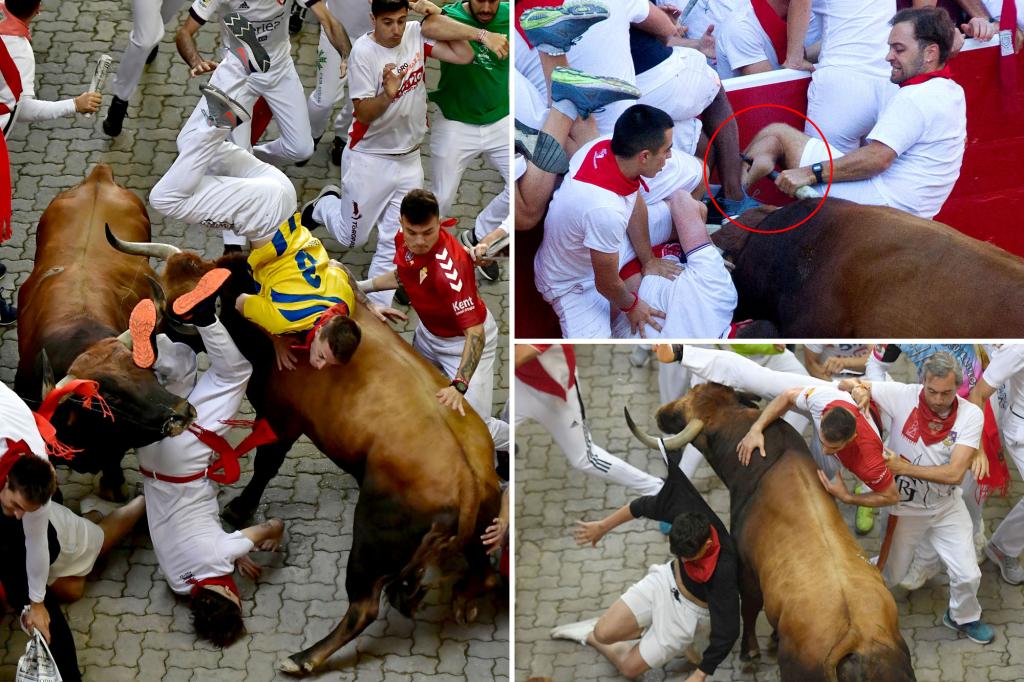 Gruesome images captured the moment an American man’s calf was gored during Monday’s running of the bulls in Pamplona, ​​Spain.

The 25-year-old man from Sunshine, Fla., was seen grimacing in agony as the horn completely pierced his lower left leg on the bloodiest day so far this year in the return of the San Fermín Festival.

The Florida man — only identified by local officials by the initials MT — suffered the ghastly injury after one of the bulls trapped a number of runners against a fence in the city’s bullring.

Video shows the animal tossing around several of the screaming runners before the injured American and several others nearby manage to leap over the fence to safety.

MT was not the only one gored Monday, local officials said.

Two other people, both 29-year-old Spaniards, were also gored, one in the knee and one in the groin, the Navarra regional government said. One of the victims had also been injured in the ring, while the other was gored while running through local streets. None was in serious condition, the government insisted.

Three other runners, all Spaniards, were treated for injuries sustained in falls during the run, which lasted just over 3 minutes.

The long-controversial festival — which has seen 16 deaths since 1910 — was making its return after a two-year hiatus due to COVID-19 restrictions.

Hundreds of runners, mostly men and some traveling from around the world, raced frantically ahead and alongside six fighting bulls as the beasts charged through the cobblestone streets of this northern city.

The run finishes at Pamplona’s bullring, where later in the day the bulls are killed by professional bullfighters.

Tens of thousands of visitors come to the festival, which was featured in Ernest Hemingway’s 1926 novel “The Sun Also Rises.”