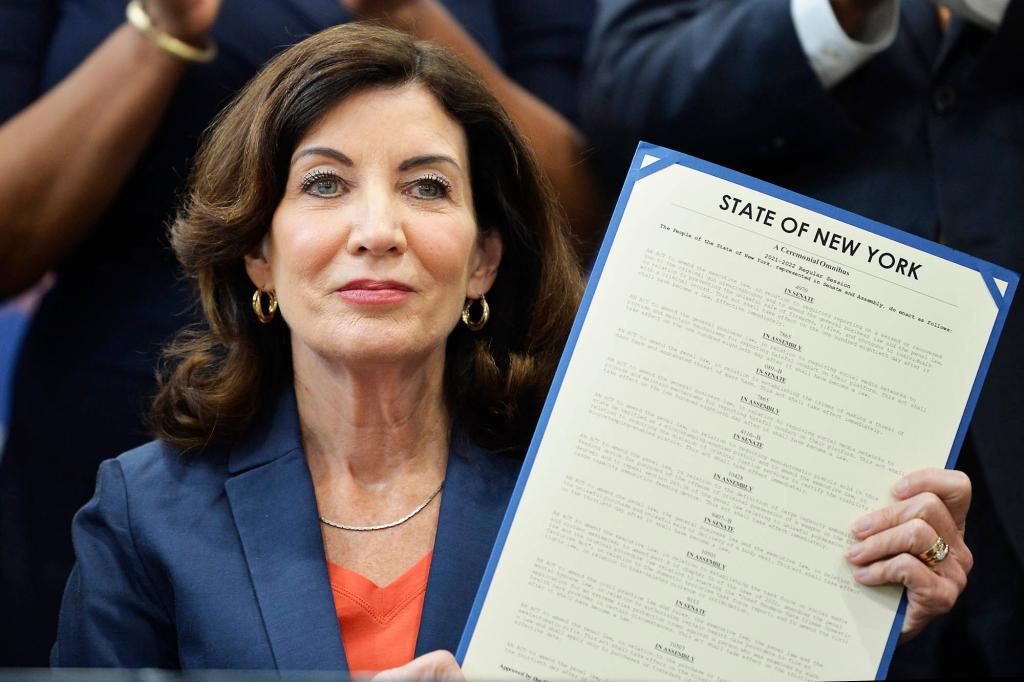 The Empire State officially has new laws on the books aimed at curbing access to weapons that have been used in recent mass killings in Buffalo and Texas.

“I speak to you today as the governor of a state in mourning and the citizen of a nation in crisis … It just keeps happening. Shots ring out. Flags come down, and nothing ever changes — except here in New York.” Gov. Kathy Hochul said Monday just before she signed into law 10 bills passed by state lawmakers last week in the wake of the mass shootings.

People under 21 years old can no longer buy semi-automatic rifles like the AR-15-style weapon that a teenage white supremacist allegedly used to massacre 10 people at a Buffalo supermarket weeks ago.

New Yorkers also face stiffer barriers to buying bulletproof vests and body armor like the ones that reportedly protected the Buffalo shooter during the rampage from a bullet fired by a heroic security guard.

Another new law aims to battle online hate by requiring social media companies to have policies in place to respond to potential threats.

The gunman made a violent threat at his former high school but was nonetheless allowed to buy a semi-automatic weapon after turning 18 despite the state’s red flag law, which was tweaked by newly signed legislation.

A threat of mass harm is now a crime punishable by up to a year in jail under another bill signed by Hochul on Monday.

Other new rules on the books are aimed at preventing gun crimes more associated with gang violence at a faster clip in recent years within the five boroughs.

Microstamping technology enabled by a new law could make it easier for enforcement to track future crimes through identifying marks that would match a firearm with an expended cartridge left at a crime scene.

State and local agencies will have to increase reporting on gun seizures to help battle the so-called Iron Pipeline bringing firearms into New York from states with looser gun laws like Georgia.

Other measures closed past loopholes on the possession of high-capacity ammunition magazines and guns that evade existing restrictions through the use of arm braces rather than standard rifle stocks.

Democrats have called on the federal government to take additional action on gun control, such as reviving a ban on assault weapons that expired nearly two decades ago.

Republicans in Congress, however, have resisted the idea of ​​imposing any new restrictions on the sale and possession of firearms – a view echoed by their counterparts in Albany ahead of elections this November.

New York Democrats cited that resistance while using the gun control push to vilify the GOP at the bill signing ceremony in the Bronx on Monday.

“We cycle through disbelief and grief and yes, anger only to be disappointed again and again and again in government – ​​No, not government, the members of a feckless, spineless, reckless party known as the GOP,” state Attorney General Letitia James said Monday at the Bronx event.