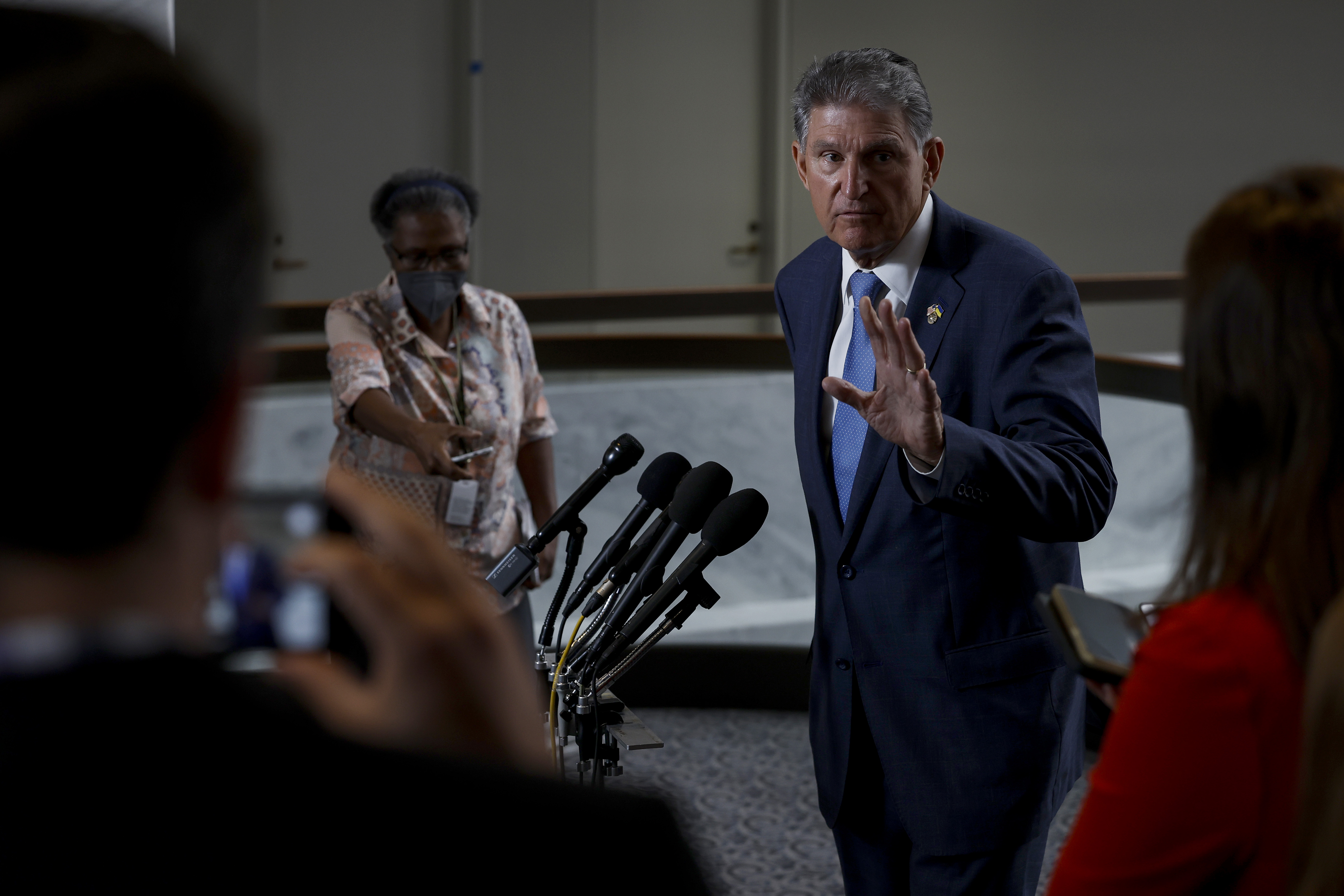 It’s a political risk for Manchin to sign onto a bill that will impose a corporate minimum tax on large corporations, spend $369 billion on climate and energy, lower prescription drug prices and extend Affordable Care Act subsidies. The centrist’s willingness to become the bill’s top salesman — alongside Democratic leaders who are deeply unpopular in red states like Manchin’s — makes him a likely target for a GOP that has often treated him as an ally this Congress.

“His party’s very unpopular in the state of West Virginia and what he’s doing now is very unpopular as well,” said No. 3 Senate GOP leader John Barrasso of Wyoming, who’s also the top Republican on the Manchin-led Energy Committee. “We’re going to be focused on that seat in 2024. We’ll see what comes to fruition of what promises might have been made to Joe Manchin in order to agree to this.”

Though Democrats’ party-line legislation is much smaller than previously envisioned last year, it’s quite a bit larger than the health care-only package that Manchin appeared to be pushing just two weeks ago. Democrats see plenty of upside for Manchin in the bill, particularly the revival of a black lung disability trust fund that helps care for West Virginia coal miners.

And another integral part of Manchin’s deal with the rest of his party is a promise to enact energy permitting legislation later this year that’s designed to make fossil fuel and green energy projects easier to build — an idea that Barrasso dubbed “a lot of pie in the sky that Democrats are not going to support in the end.”

Asked for comment about Republicans’ fury over the deal, Manchin’s office pointed out several provisions that would specifically benefit his state: money for carbon-capture energy projects; finishing the Mountain Valley gas pipeline; a $4 billion carveout for coal communities and the health care components that disproportionately help West Virginians. Manchin’s betting those will help the bill become more popular with his constituents, alongside his legendary political run in the state and knack for retail politics.

But his home-state GOP colleague, Sen. Shelley MooreCapitosaid Manchin’s got his work cut out for him pitching the deal back home: “It’s not good for the state, and I think it’s difficult to sell in the state,” she said, adding that “he’ll put that in his calculus and make his own decision” on running again in 2024.

For months, Manchin’s been Republicans’ best Democratic partner. He helped keep the legislative filibuster unscathed and blocked his own party’s sweeping Build Back Better bill. He’s been raising warnings about inflation as nearly as long as the National Republican Senatorial Committee Chair Rick Scott (R-Fla.).

And Manchin’s political standing in West Virginia is strong, which means that his potential opponents sense a rare opportunity in the current moment.

“After holding the line against some of the terrible bills being pushed by President Biden and the left, Joe Manchin just changed course and let the dam break wide open,” said West Virginia Attorney General Patrick Morrisey, who lost narrowly to Manchin in 2018 and could run again in 2024. “I respectfully ask Senator Manchin to change his position and vote no.”

State Treasurer Riley Moore is also seen as a potential candidate by Republicans. He’s Capito’s nephew and the grandson of former Gov. Arch Moore, and is leading a GOP charge against banks factoring in climate change risk into their lending decisions.

Manchin himself is dismissing questions about 2024 at the moment — though by declining on Sunday to endorse a second term for Biden, he took a position that probably helps him in his state. As for the party-line deal with Schumer, Manchin said, “this is not about politics.” He’s repeatedly said the party-line energy, tax and health care bill is neither Republican nor Democratic, but instead “an American bill.”

“I think it absolutely is so needed for our country,” Manchin said on Monday. “So does it affect me politically or not? I didn’t look at it that way and I still don’t.”

Manchin agonized over running again in 2018, frustrated by the Senate’s plodding pace and the leadership style of Republican leader Mitch McConnell. He’s made no decision on what to do in 2024, according to his colleagues, and he’s declined to answer direct questions about his political future in recent weeks.

“For Republicans, we’re getting more red and the Biden administration is doubling down on some of the Obama administration things, which are tied to the Democratic party,” Capito said. “Any Democrat’s having trouble.”

Three red-state senators who face reelection in 2024 are integral to Democrats’ majority: Manchin, Sherrod Brown of Ohio and Jon Tester of Montana. All represent states that they have only gotten more Republican over the past few election cycles, making it critical for Democrats to hold their seats and make space in the caucus for their unique ideological brands.

And Manchin comes from probably the toughest state for Democrats of anyone in the caucus, which is why he was so deliberative when it came to supporting a party-line deal with Schumer. It’s plainly clear that Democrats want him to run for the Senate rather than withdraw, run for governor or pursue something like an independent presidential run.

There’s almost certainly no one else who can compete in a Senate race in the state, let alone win one.

“I’d like him to” run for reelection, said Sen. Tim Kaine (D-Va.). “But trying to predict what Joe Manchin will do? … He’s a vigorous, healthy guy who is playing a healthy role.”

Marianne LeVine contributed to this report.