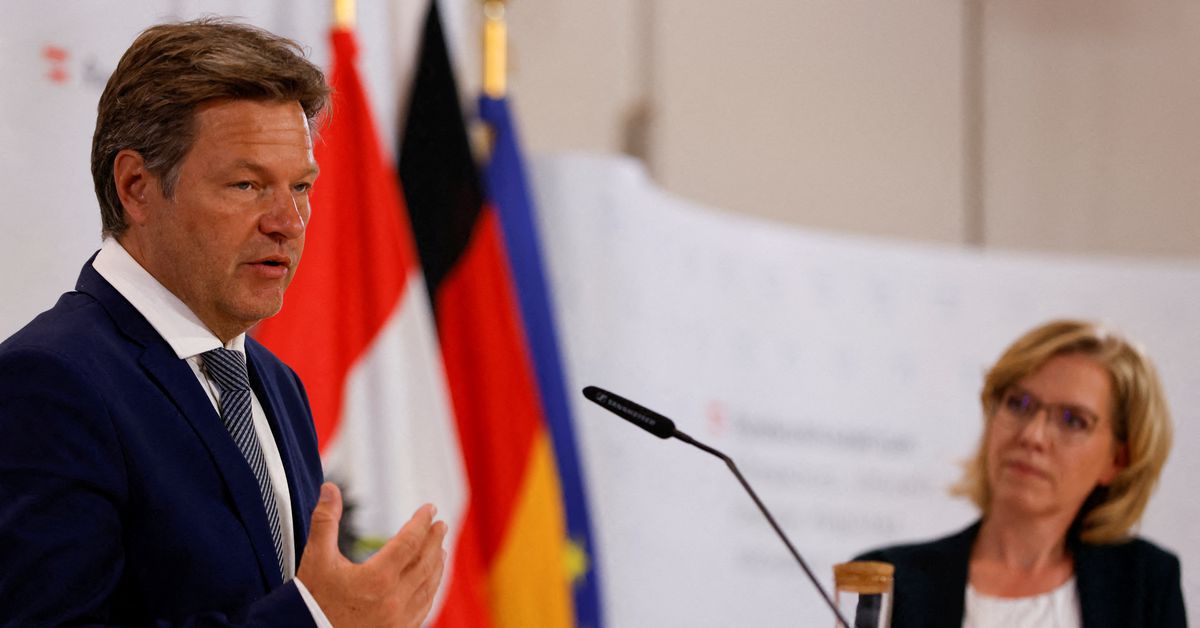 BERLIN, July 28 (Reuters) – Germany is set to impose a levy on all gas consumers from Oct. 1 aimed at helping suppliers struggling with soaring gas import prices, a draft law showed on Thursday.

The levy aims to share the additional costs for replacing gas from Russia among all users, and prevent insolvencies among gas traders.

Households and industrial consumers with long-term contracts will be hit by the charge, which will be valid until the end of September 2024, the document shown. Gas importers will have to bear rising costs by themselves until the levy kicks in.

German Economy Minister Robert Habeck said the levy would amount to between 1.5 euro cents and 5 euro cents per kilowatt hour (Kwh), with the proceeds available to all companies that need to replace Russian gas.

This means that a four-person household could face additional costs of up to 1,000 euros ($1,014) per year.

Habeck said the measure was a difficult but important one to stabilize the energy market.

“One doesn’t know exactly how much (gas) will cost in November, but the bitter news is that it’s definitely a few hundred euros per household,” he said.

More details about the levy will be announced in August, the document showed.

Local utility association VKU welcomed the measure, adding the levy should be raised or extended if high prices persist.

A prerequisite to the government triggering the mechanism is significant disruption to gas flows into Germany. Russia’s Gazprom cut flows through the Nord Stream 1 gas pipeline to just 20% of capacity this week.

Germany moved to the second of three stages of its emergency supply plan last month, allowing the government to trigger a price adjustment clause so suppliers can pass price increases on to their customers, although it has yet to do so.

A general levy that would increase gas prices for everyone, regardless of their supplier, is considered fairer, however.

The government has meanwhile appealed to citizens and industry to save energy now so it can fill gas storage facilities before winter – aiming for 95% of capacity by November from 67.2% currently.

Firms are weighing their options, while Berlin has already said it will switch off lights at 200 public buildings and landmarks at night. read more

With Germany going through what Habeck called its “biggest energy crisis”, Gazprom’s failure to deliver reserved gas was pushing companies to look for the fuel at significantly higher market prices, he said.

“This (price) difference is the levy. It is then passed on to the end consumer because otherwise the companies would permanently lose millions per week,” he added.

Marcel Fratzscher, president of the DIW economic institute, said it was “right and necessary” to pass on costs to all consumers and Germans should prepare for at least a tripling of gas heating bills, but there should be relief measures to support low-income households, according to the Rheinische Post.

Habeck said people falling into poverty because of higher energy prices must be protected and relief measures would be targeted.